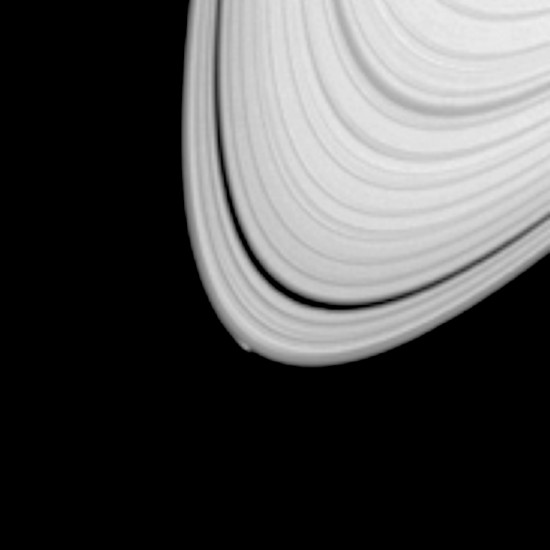 A clump of material in Saturn’s A ring. Credit: NASA/JPL

What is the object in Saturn’s ring plane?

Cassini entered orbit around Saturn on July 1, 2004. On August 11, 2009 the spacecraft was in position to observe the giant planet’s equinox, when its rings turned edge-on to the Sun, something that happens every 15 years. The then named Cassini-Equinox mission found several complex configurations within the rings, some rising as high as four kilometers. Saturn’s rings were thought to be only about twenty meters thick, so meta-stable shapes of that size were a complete surprise to mission specialists.

Recently, another shape has been seen embedded in the outer edge of Saturn’s A ring. Seen in the image at the top of the page, the anomaly, called “Peggy”, is being described by NASA as a “new moon” in the process of completing its emergence from the rings. According to planetary scientists, Saturn’s icy moons, such as Enceladus, were formed in a distant past, when Saturn possessed a far more substantial ring system. The moons formed near the edge of those massive rings and then moved away, establishing themselves in individual orbits. That process is thought to have “depleted” those larger rings, to the point where large moons can no longer form.

It is hoped that the Cassini observation will bolster conventional theories of Solar System formation, since the infant Sun was supposed to be surrounded by a disk of material out of which the planets and planetoids condensed. Saturn is seen as a kind of “Solar System in miniature”, so what happens there can be forced onto unknown conditions in the remote past.

This not the fist time that a small object, believed to be another moonlet, has been seen in Saturn’s rings. In July 2009, Cassini photographed an ice ball, this time in Saturn’s B ring. It was identified because it cast a long shadow across the ring plane during equinox, when the angle of the Sun was ideal. Known as S/2009 S1, it is a mere 400 meters in diameter. Peggy, on the other hand, is larger than a kilometer in diameter.

How do the clumps of ice and ridges form in the rings? It is conventionally assumed that collisions and shock waves initiate the necessary resonant vibrations for material to gather together. Gravitational attraction from so-called “shepherd moons” is said to be an additional source of influence. Small moons, such as Daphnis, do move up and down through the ring plane, affecting the motion of ring particles.

However, a far stronger force than gravity is neglected in their speculations: Saturn’s rings and moons are electrically charged objects moving within its vast plasmasphere. It is those electric fields, and their attractive/repulsive qualities, that are most likely creating the instabilities that contribute to the formation of “moonlets”. Clumping is far more likely to occur in charged material.