Home Picture of the Day The Mother of Aeneas

The Mother of Aeneas 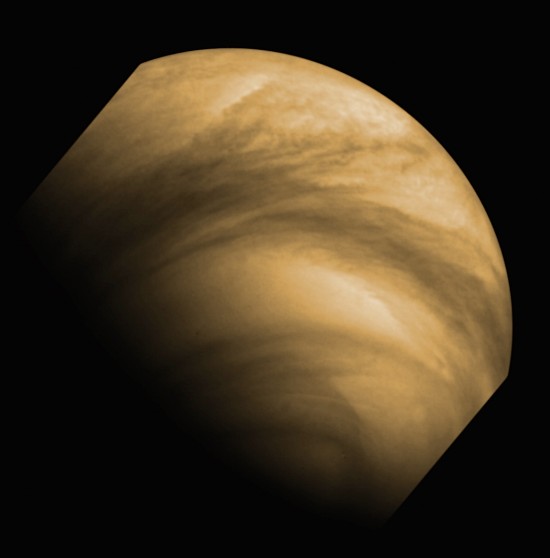 Venus is like other rocky bodies in the Solar System: electrically active.

The European Space Agency’s (ESA) Venus Express is approaching the end of its mission. Launched from Baikonur Cosmodrome in Kazakhstan on November 9, 2005 the spacecraft entered orbit around Venus on April 11, 2006.

Recently, ESA engineers sent the orbiter deep into the clouds that permanently shroud the planet, coming to within 130 kilometers of the surface and then back out to 450 kilometers. It is hoped that increasing its altitude will enable Venus Express to survive until sometime in early 2015. Eventually, it will run out of maneuvering fuel and burn up in the clouds.

One of the “surprising” mission discoveries was electric discharges in the planet’s upper atmosphere. The discovery was completely unexpected because the density of the Venusian atmosphere was thought to prevent the formation of lightning bolts. As Dr. Donald Gurnett, a physicist at the University of Iowa wrote at the time:

However, the mission specialists did realize that the discharges on Venus could be of a lower frequency than lightning on our planet because radio signals cannot penetrate the ionosphere at frequencies below one megahertz. Therefore, they were unable to make a definitive statement about plasma discharges.

Venus Express found low-frequency electromagnetic radiation in bursts lasting fractions of a second. Called “whistlers”, the bursts are considered a sure sign of electrical phenomena. A whistler is an extremely low-frequency electro-acoustic wave that is normally generated by lightning. They are called whistlers because they demonstrate a characteristically decreasing frequency falloff in detection equipment. In some short-wave radio transmissions, the whistle can be heard while tuning between stations.

With the detection of whistlers, ESA scientists announced: “We consider this to be the first definitive evidence of abundant lightning on Venus.”

Venus radiates in the infrared with twice the energy it receives from the Sun, so there must be a source for that heat. Venus has an extremely weak magnetic field and no magnetosphere but it does possess an ionosphere, so it is an electrically charged body. Its ionospheric charge flow carries electricity from the solar wind, the stream of ions ejected by the Sun, into the Venusian environment. It could be that the planet is constantly charging and discharging in the infrared.