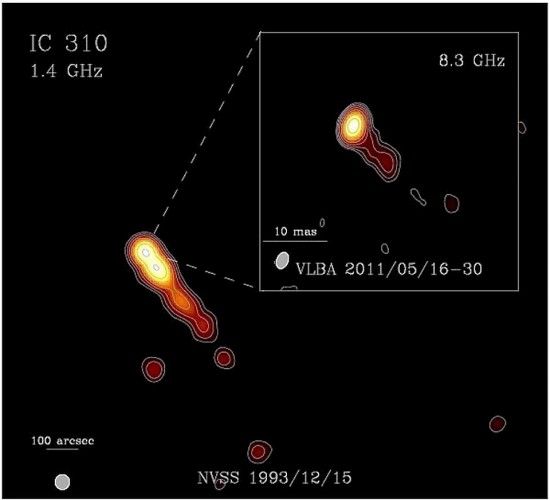 An “extremely powerful outburst of gamma rays” was recently detected by the MAGIC telescopes in the Canary Islands. The most remarkable aspect to the observation was that it exhibited “very rapid flux variations”. In other words, the gamma ray emissions scintillated like a lightning flash. According to a press release, the “particles accelerated in an extremely narrow region”, most likely from “strong electric fields”.

It should be noted that black holes are an inferred phenomenon; they have never been detected by any instrument. It is an assumption that matter is accelerated and subsequently compressed by a black hole’s gravity until it is ultimately destroyed inside the so-called “event horizon.” That assumption drives all ideas about galactic scale behavior, since it is assumed that 98% of all galaxies are inhabited by so-called “super massive black holes” (SMBH).

The jet of charged particles seen erupting from IC 310 is thought by astronomers to result from rotational energy generated by the SMBH in its core. Conventional theories insist that gravity is the dominant force in the Universe, so any anomalous observations are forced into that theoretical framework. That narrow viewpoint produces scientific papers whose common refrain is one of “puzzlement” and “unexpected results”. Although the MAGIC data provokes comments that seem to suggest electrical activity as the foundation for what is happening in IC 310, the conclusion is that kinetic effects, such as angular momentum, power its radio jet and gamma ray outbursts.

Flares and jets spewing from galaxies are thought to be caused by stars traveling too close to their central supermassive black holes where they are torn apart by tidal forces, or “rotational energy”. Most of the star’s gas escapes the black hole, but a small quantity is captured by the immense gravity and forms a rotating disk. Closer to the black hole, heat generated by molecular collisions tears the atoms apart and the disk of gas glows in extreme ultraviolet and X-rays. When matter eventually falls into the black hole, gamma rays burst out.

Electric Universe advocates propose that electric currents in plasma generate magnetic fields that constrict the flow of electric charge. As previous Picture of the Day articles point out, the constricted channel is known as a Bennett pinch, or z-pinch. The pinched electric filaments remain coherent over long distances, spiraling around each other, and forming helical structures that can transmit power through space. Those filaments are the jets seen in galaxies and stars.

No gigantic masses compressed into tiny volumes are necessary, and those flares and jets are easily generated with the proper experimental models. There are other factors that should be considered when analyzing data from space before resorting to super-dense objects and other fantastical ideas as their cause.

There is no evidence that matter can be compressed to nearly infinite density. Z-pinches in plasma filaments form plasmoids. Electricity is responsible for the birth of stars and galaxies. When the current density gets too high double layers in the circuit catastrophically release their excess energy and appear as gamma ray bursts or X-rays or flares of ultraviolet light.

Infrared and X-ray telescopes have confirmed the existence of a plasma-focus plasmoid at the heart of the Milky Way. This high-energy electrical formation is the real power behind our galactic circuit. Since dust blocks visible light, viewing the core has not been possible until the advent of telescopes that can “see” infrared and X-ray light, which can penetrate dust. Radiation from the Milky Way’s plasmoid is typical of that given off by highly excited stars, indicating extremely strong electrical stress. The strong electrical field in the plasmoid acts as a particle accelerator. Electrons accelerated to high speeds spiral in its magnetic field, emitting high frequency wavelengths.

In a galactic circuit, electrical power flows inward along the spiral arms, lighting the stars as it goes, and is concentrated and stored in the central plasmoid. When the plasmoid reaches a threshold density, it discharges, usually along the galaxy’s spin axis. This process can be replicated in a laboratory with the plasma focus device.

So, it could be that, despite the idea’s erroneous origin in spinning gravity fields, there are lightning flashes taking place in the center of IC 310.