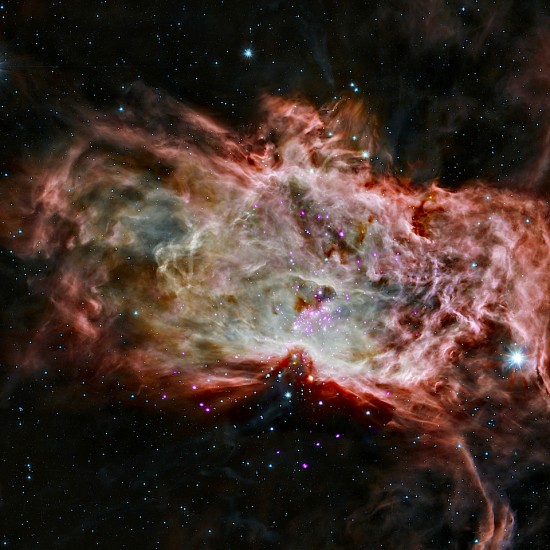 Some star clusters appear to be inside out.

Ideas that enter the mind under fire remain there securely and for ever.
— Leon Trotsky

The Flame Nebula is located in the constellation of Orion, just below the three visible stars that make up its belt. Of the three stars that comprise Orion’s sword, one of them is actually the Orion Nebula, a celestial object that has been the subject of past Picture of the Day articles. Both the Flame and Orion nebulae are part of the Orion Molecular Cloud complex that also includes the Horsehead Nebula, the Barnard-30 star-forming region, M43, and M78.

According to a recent press release, star clusters in the nebula and the surrounding region are “inside out”. Star clusters are thought to form on the inside of nebular clouds first, because the gas and dust is more concentrated there, thus providing a better environment. Since the theory of star formation demands that gravity concentrates matter into such small dimensions that fusion fires are caused to ignite, that idea made sense, until now.

Stars like the Sun live their lives as per theories that involve hydrogen fusion. As they consume that fuel, they age in well-defined stages: first they are born as “T-Tauri stars”, then they enter their adulthood as “G-type” stars. As written elsewhere, once their supply of hydrogen begins to decline, their hydrostatic equilibrium decreases, causing their cores to contract, which raises the core temperature. At 100 million Kelvin, the core begins to consume the helium “ash” that collected there. That increased temperature also means that stars form a hydrogen-burning region outside the helium core. Astronomers believe that stars in that stage of evolution become cooler, but brighter. This is what allows them to determine how old stars are based on the “Hertzsprung–Russell diagram“.

Using the Chandra X-ray Telescope, currently in Earth orbit, stars in the Flame nebula were analyzed in X-ray light emissions in order to determine how massive they are. Combining that information with infrared data from the Spitzer Space Telescope enabled them to use their theoretical models as a way of measuring their ages. What they found did not match what was predicted. Konstantin Getman of Penn State University wrote: “Our findings are counterintuitive. It means we need to think harder and come up with more ideas of how stars like our sun are formed.”

The reason that conventional ideas about star formation are confused is because astrophysicists fail to consider electricity as a formative and sustaining force. In an Electric Universe, gravity, density, compression, and mechanical phenomena are overshadowed by the effects of plasma behavior. Stars are not balls of hydrogen gas that are crushed into helium and electromagnetic radiation by gravitational pressure. Rather, they are the loci of galactic z-pinches in Birkeland currents.

An electric discharge in a plasma cloud creates a double layer, or sheath, along its axis. Positive charge builds up on one side and negative charge on the other. A strong electric field forms between them, and if enough current is applied the sheath will glow, but it is otherwise invisible. Electric currents flow along the sheaths. In plasma, those electric charges spiral into filaments, or double layer tubes. The filaments attract each other, but rather than merging they spiral around, gradually pinching down into arc mode discharges. Stars are born to such electrical parentage.

The correct model for a nebula is an arc lamp that emits light only at a specific frequency, depending on the gas that it contains. Electricity causes the gaseous plasma in the lamp to glow. Since more than 90% of the light from planetary nebulae shines in ionized oxygen wavelengths, they should be thought of as oxygen discharge tubes and not as balls of gas.

The Electric Star hypothesis resolves many “inexplicable” ideas that arise from a lack of knowledge about plasma and electric fields in space. Instead of kinetic effects, nebulae are powered by electricity. The electric power density in dusty plasma is greatest along the axes of Birkeland current filaments. The current produces an electromagnetic field that draws matter to the filaments from surrounding space more strongly and from a greater volume than is possible with gravity. When sufficient matter accumulates in the filaments they luminesce. Stars are born along those filaments.

Bright X-ray knots in the Flame Nebula are the result of electric filaments creating z-pinches in plasma. Those z-pinch zones are located in various parts of any particular nebula, not necessarily in their centers or their edges. Dating the ages of stars cannot be done using conventional models, so astronomers will always find new “mysteries” in their theoretical models.