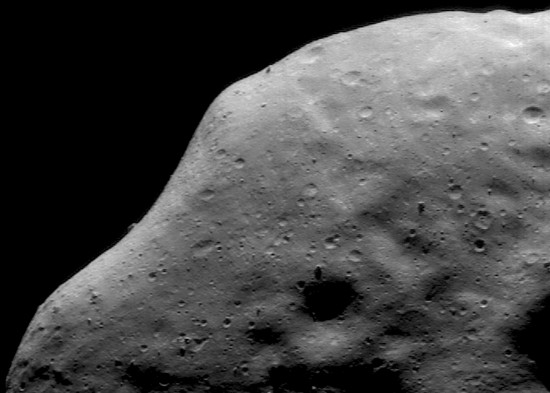 Asteroid 433 Eros from NEAR-Shoemaker on its way to touchdown. Credit: NASA/JPL

Space and time do not bend or warp.

In September 1998 astrophysicists documented an inexplicable “tug” acting on the now defunct Ulysses spacecraft as it traveled through the Solar System in an orbit over the Sun’s poles. When radio signals from Earth were returned from an onboard transponder, Ulysses exhibited an anomalous acceleration toward the Sun. A Doppler shift in the frequency of the return transmission indicated a variance greater than could be accounted for by known mechanisms—as of today, no one in the conventional science community can provide a solid explanation for it.

NASA scientists also determined that both of the Pioneer spacecraft are off course by more than a hundred thousand kilometers. At this time, there is no explanation for the navigational deviation, so many speculations are offered about what “mysterious” forces could be acting on the most distant of artificial objects. They include: multidimensional bent space, dark energy, and “dark matter friction”. Other ironic theories such as, “differential antimatter gravity” are presented as “explanations” for the deceleration.

Telemetry from NEAR-Shoemaker (currently resting on the surface of Asteroid 433 Eros), the Galileo mission to Jupiter, the Cassini-Solstice Mission, the Rosetta cometary probe, and the MESSENGER mission to Mercury reveal similar discrepancies. Astronomers are baffled by this information because standard theories of motion in the cosmos rest within a gravitational model.

Modified Newtonian Dynamics (MOND), a theory developed in the early 1980s by Mordehai Milgrom, has also been suggested as a possible reason for the effects on the various space probes, although Milgrom himself feels that MOND is far too diffuse a force to affect such small objects. Perhaps the suggestion is no more inexact than those previously mentioned.

However, on the large scale, according to MOND theory, gravity can vary depending on acceleration. Since the velocity measurements of some stars at the edges of various galaxies seem to demonstrate greater speeds than they should, Milgrom proposed that gravity can alternate between two states: one where its influence falls off with the square of the distance—Newtonian gravity, and one where its force is linear, declining with the distance—MOND.

MOND was offered as an alternative to cold, dark matter’s inferred gravity field. Since stars on the outskirts of galactic disks revolve at greater-than-apparently-possible velocities, they “must be” experiencing the effects of an unseen and undetectable mass. In short, a volume of dark matter five times the volume of normal matter is supposed to exist in and around many, if not all, galaxies. It is that invisible matter that is said to be exerting itself so strongly.

Both phenomena, the deceleration of space probes in the Solar System, as well as the unexpected stellar velocities in galaxies, can be explained by one thing: electricity flowing through dusty plasma.

As a spacecraft travels through the interplanetary medium it builds up a negative charge differential with respect to the positive charge of the Sun. The Sun’s weak, radial electric field, extending outward for almost a light-day without diminishing, and generated by the movement of charged particles known as the “solar wind,” draws the negatively charged object back toward itself.

The linear attributes of MOND gravity theory are a powerful hint at what might actually be taking place in galaxies as well as star systems. Since electric forces can scale by many orders of magnitude, the weak, radial electric field of the Milky Way galaxy, for example, is most likely doing the same thing to the stars at its outer boundary as the Sun is doing to the charged objects within its sphere of influence.

The Sun is not keeping its family of planets in lockstep by gravity alone, its electric field is also acting in an additional, if not principal manner. It is the electric field of the galaxy that is keeping the stars in orbit around the nucleus, in addition to its far less powerful gravitational field. If electric fields and electrical transmission over star-spanning distances are given their due, MOND, dark matter and all the other ad hoc Big Bang theories would vanish.

As Electric Universe advocate Wal Thornhill wrote: “Common sense suggests that it is unlikely that the laws of physics will need to be rewritten, simply that we should understand better those we have. We need not trouble ourselves with arguments about the nature of gravity in this instance because the mystery can be solved if the electrical nature of the universe is acknowledged. The mystery only arises because astrophysics is taught incorrectly. Students are taught that any separation of charge in space is quickly neutralized as electrons rush to neutralize the charge imbalance. As a result, electricity in space is almost never mentioned, except as a transient effect.”