Home Picture of the Day Wizards and Sourcerers 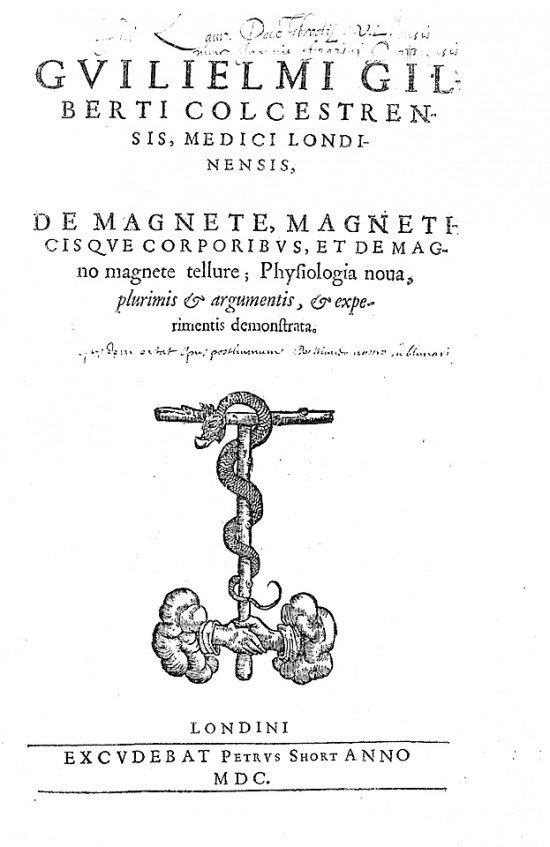 A failure to consult original, primary sources often leads to errors, both in science and the humanities.

One link in a chain of citations may misrepresent its source one way or another, be it by cherry-picking, misunderstanding the meaning of the original or presenting a paraphrase as a direct quotation. This occurs across the board because it is human to err, but is especially common in interdisciplinary contexts, where a researcher may lack expertise in one of the subjects. It is imperative to ‘exsourcise’ the literary slips from paradigm-changing fields, where the consequences can be diabolical. That the devil is in the details goes without saying. The following discussion homes in on two cases from the history of science and two from mythology, in order of increasing gravity.

In his ground-breaking treatise De Magnete (On the Magnet), the English physician and scientist William Gilbert (1544-1603) argued for the first time, on the basis of experimentation on magnets, that the earth sustains its own magnetic dipole field. Dozens of scientific textbooks attribute the dictum magnus magnes ipse est terrestris globus (‘the terrestrial globe is itself a big magnet’) to this founding father of geomagnetic studies. It is repeatedly claimed that these words were contained in the title of Gilbert’s book or one of his chapters. Yet although they convey the thrust of the work, the quote itself does not appear to be found either in the first edition, published in London (1600), or in the edition published in Szczecin, Poland (1633).

The earliest appearance of the phrase can be traced to the Prussian naturalist Alexander von Humboldt (1769-1859), who discussed Gilbert’s work in 1836. Comparison of von Humboldt’s citation with Gilbert’s original Latin reveals that the famous soundbite is really a paraphrase. The winged words repeated so often today are von Humboldt’s rewording of Gilbert’s sentence opening with: “Magnus magnes siue terrestris globus …”, that is to say, ‘The great magnet or the terrestrial globe …’ The difference between a quotation and a paraphrase deserves to be acknowledged.

According to the Italian naturalist Giovanni Battista Brocchi (1772-1826), who had committed himself to neither uniformitarianism nor catastrophism, his earlier compatriot, the jurist and antiquarian Alessandro Alessandri (1461-1523), had considered that the deluge could have been caused ‘by some extraordinary upheaval, or because the axis of rotation was then differently placed, so that the waters of the Ocean covered other parts of the globe’. If it were correct, this understanding of Alessandri would conjecture a change in axial inclination, almost two centuries before Thomas Burnet did so. It was followed in the 1830s by geologist Charles Lyell (1797-1875), who rejected the hypothesis, and Edward Hitchcock (1793-1864), who favoured it. However, in the Latin work he published in 1522, Alessandri claimed little more than that the flood waters may have come from ‘different directions’ (diuersis cardinibus) and the ‘seats’ (sedibus) of the sea may have been excited. Zoologist Charles Robert Eastman reached the same conclusion in 1904-1906. Brocchi seems to have spontaneously conceived of linking rotational changes to floods, in a mistaken belief that he understood Alessandri correctly.

Within the ambit of mythology, a failure to pursue primary sources risks the inadvertent creation of new myths. For example, in 1910 the American mythologist Katharine Berry Judson, a librarian no less, paraphrased a myth from the Klamath nation (Oregon), in which the chief deity and creator, K’múkamtch alias K’músh or Kumush (‘Old Man of the Ancients’), “had sprung quickly from the ashes of the northern lights and made the world at the call of Morning Star.” Her narration was injudiciously repeated by others, including Stanton C. Lapham, in 1931, and Ella Elizabeth Clark, in 1953. But did the Klamath really trace the god’s origins to the polar aurora. The wording of the original source, published by the Swiss ethnologist Albert Samuel Gatschet in 1890, was:

Although the Klamath certainly knew the northern lights, the likely identification of the deity with the sun and Gatschet’s classical training arouse a strong suspicion that the “aurora” in this myth was really the fiery dawn. It is, after all, the Latin word for ‘dawn’, still in use during the Victorian age. This is consistent with what appears to have been the earliest recording of the myth, obtained by the American folklorist Jeremiah Curtin in 1884, probably from informant Ko-a-lak´-ak-a or Sconchen:

“Then Isis threw Kumush into the fire and covered him with burning wood. He burned him to ashes, but in the ashes was the disk. The next morning the morning star, Kumush’s medicine, called out to the disk: ‘Why do you sleep so long? Get up, old man!’ That minute Kumush was alive – he will last as long as the disk and the morning star.”

Judson’s misinterpretation magically enabled a new myth to see the light of day.

As a final exercise in dispelling modern myths, the controversial catastrophist Immanuel Velikovsky cited this ostensible Chinese report of anomalous solar behaviour no less than four times in his Worlds in Collision: under emperor Yáo, “the sun during a span of ten days did not set, the forests were ignited, and a multitude of abominable vermin was brought forth.” Again, the statement spawned interesting literary offspring in its own right, but did Velikovsky ventriloquise the Chinese records?

Oddly, Velikovsky’s sources were two German historical compendia from the 18th century: Johann Hübner’s Kurtze Fragen aus der politischen Historia (1715) and Johann Heinrich Zedler’s Grosses vollständiges Universal-Lexicon (1749). The lack of a page number given for Hübner might indicate that Velikovsky lifted this reference from Zedler, who relied on Hübner. Hübner’s words were faithfully reproduced by Velikovsky, but did not identify a source. Some searching reveals that the purported tradition originated in the Latin tome Sinicæ Historiæ Decas Prima (1659), penned by the Italian Jesuit missionary and historian Martino Martini, who spent many years in China: Per hæc tempora diebus decem non occidisse solem, orbemque conflagraturum mortales timuisse scribunt. Magna enim incendia exarserant … Varia insuper monstra serpentum nata affirmant. That is: ‘They write that during this period the sun did not set for ten days and it was feared that the disc would incinerate mortals. For great fires had burned … They affirm that various portents of snakes were produced overhead.’

Alarmingly, the Father himself refrained from providing a bibliographic reference. And search as one may, the Chinese literature appears to be entirely in the dark regarding this prolonged day. Yet a remarkable event involving ‘suns’ and the number 10 is on record. The tradition dictates that there used to be ten suns taking turns, so that only one would appear at a time. On one fateful occasion during the legendary reign of Yáo (c. 2356-2255 BCE), all ten suns burst forth into the sky at once, producing an intense life-threatening heat and drought on the earth: “Long ago, ten suns came out all at once, and the ten thousand things were all lighted up.” An archer variously identified as Yáo and Hòu Yì eliminated all except the extant sun: “Yao ordered Yi to shoot the ten suns, and he hit nine.” “During the time of Yao the ten suns came out together, and scorched everything, whereupon Yao shot at them. Hence they never were seen together any more on the same day.”

An advocatus diaboli might invoke the argumentum e silentio that Martini referred to an obscure source unknown today. But insofar as Martini could hardly have missed the story of the ten concurrent suns, the likelihood is that his account was a garbled rendition of it. Had Velikovsky bothered to bone up on Sinology, the sun would have set over the myth he perpetuated.

The lesson to draw from these examples is that researchers of all stripes had best work from original sources at all times, even if these were published centuries ago or the inscrutability of Latin or Chinese requires consultation of experts. Regardless which craft is involved, conjuring up new myths is a practice to be written off.