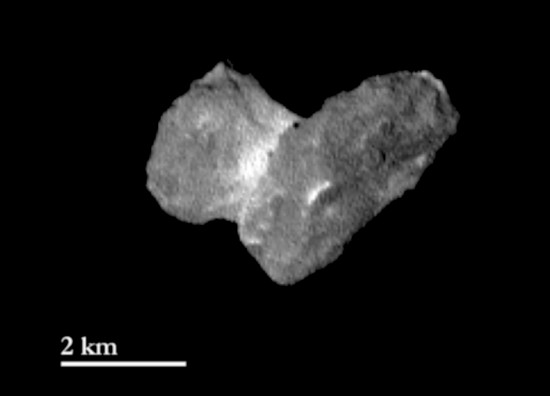 The Rosetta Mission Predictions
By David Talbott and Wallace Thornhill

After a 10-year journey, Rosetta spacecraft has now reached Comet 67P/Churyumov-Gerasimenko. It looks like the mission is going to be a goldmine for us.

Already one self evident prediction of the electric comet model has been confirmed: a spectacular, sharply ‘spark machined’ surface—just the opposite of what the “sublimating ices” model of comets would predict and a refutation of all published artistic visualizations of the comet prior to Rosetta’s arrival.

As most of our readers will know, the double-lobed form of the nucleus, similar to the observed forms of so many comets and asteroids, is no surprise to electrical theorists.  Standard theory, on the other hand, must call upon repeated astronomical improbabilities (merging of two tiny and remote bodies in space) to explain these recurrent morphologies.  If such improbabilities are common in a gravitational scenario, why no triple-lobed comets or asteroids?

While no electrical theorist would deny the possibility that a chunk of dirty ice could still be circling the Sun today, none expects substantial water-ice either on or below the surface of 67P/Churyumov-Gerasimenko.  More likely would be a possible localized dusting of frost as trivial levels of ice crystals, created electrochemically in the coma, drift to the surface.

Significant things to look for as the Rosetta mission continues:

And, if a strong coronal mass ejection from the Sun strikes the comet, we expect the comet to respond electrically with a surge of activity, confirming that the jets are not due to warming from the Sun but to charged particle distribution in the electric field of the Sun.

If you’re wondering about the electrical theory, facts, and reasoning behind these expectations, it’s time to watch The Electric Comet documentary, along with the accompanying video on reported infrared readings of “water” from the Deep Impact event at Comet Tempel 1.