Home Picture of the Day Giant Wombats and Electrical Fossilization 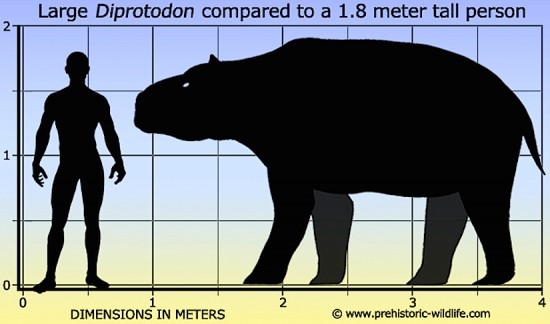 Two years ago, I predicted that extinct giant marsupials would be found on Australia’s Mornington Peninsula.

Recently, an elephant-sized wombat (the marsupial, Diprotodon) was discovered off Sorrento, Victoria concretized in a limestone beach deposit. But why was I so certain?

Along the entire Victorian coastline, from Inverloch (Dinosaur beach) to South Australia (Naracoorte limestone caves), there is evidence of a vast extinction! The remains of shellfish, trees and mega-fauna are evidence of electrical petrification on a vast scale (life forms transmuting to rock).

As close by as inland Lancefield, massive bolus-shaped graves of these very animals, from giant kangaroos to huge wombats, abound. They inevitably occur in tangled heaps of destruction. In other continents, from the United States to Russia, similar mass mega-fauna destruction sites occur.

The Sorrento Diprotodon is not an isolated example, as the abundance of electrically formed plant fulgurites along the cliff testify. In addition, layers of fossilized shells, thirty meters above the shoreline, point to a parallel mega-tsunami. This is evidence of a vast electrical plasma discharge striking the entire area. The cause? Comet; coronal mass ejection (CME); planet in disturbed motion? We are not sure! However, to my mind, petrification with its transmutation of elements is sure proof of an electrical discharge.

Australia is also replete with petroglyphs, which plasma physicist, Anthony Peratt, thinks to be a representation of a huge plasma instability event. We conjecture that the event was cosmic in nature. However, the method of destruction has explanations in the ancient legends of Port Lincoln:

“The local sand hills along the South Australian coast were raised by Marnpi and Tatta, two of their ancestors. A great fire, coming from the ocean, spread far and wide on the sea-coast, and seemed likely to envelop the whole country in its flames. Deliberating how to prevent such a calamity, it occurred to the above mentioned personages that the best method of quenching the fire would be to bury it; they accordingly betook themselves to the task, and, in executing it, threw up those sand hills which testify to this day the vastness of the undertaking.”(Thanks to Rens Van der Sluijs).

According to another Aboriginal testimony: “Long ago, a great tidal wave came to Leywhollot (Portland), but as the beach there was too low to restrain it, it rolled on through the Nine-mile forest, devastating the country, and destroying all animal life. Banbangil (Mount Vandyke) rose from the plain in one night. There were great wild beasts in the country then that the black fellows dared not encounter. When Mount Gambier begins to burn, and the earth to shake, the tidal wave will come again.”

I predict thousands more mega-fauna examples will be unearthed in Victoria’s limestone and sand dunes. In other continents, they are generally found in spherical-shaped sinkholes, either fossilised or petrified. For instance, the mammoth site in Hot Springs, South Dakota, United States, where Palaeontologist, Dr. Larry Agenbroad, showed me species from mammoths to giant short faced bears submerged in micro-layers of limestone. We should at this stage be checking for iridium, beryllium and carbon spherule markers similar to those found at mammoth sites by Berkeley nuclear physicist Rick Firestone. This would be further evidence to a calamitous cosmic event.

Could Australia’s giant wombats be immersed in similar isotopic markers and nano-diamonds?

Thunderbolt.info readers can exclusively watch this video for free by clicking here and using the password “mungoflix2”