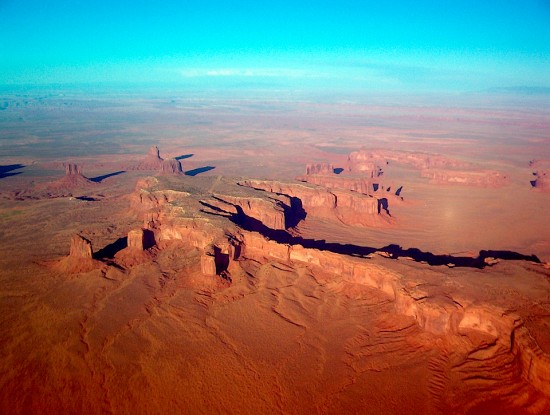 An aerial view of Monument Valley.

The deserts of the Southwest United States are full of anomalous geography.

In a previous Picture of the Day, the giant sandstone tors of Monument Valley, Arizona were mentioned, in passing. Consensus geology considers monolithic structures to be millions of years old, and the result of erosion from wind and rain on volcanic intrusions or “folded” terrain caused by pressure. There are difficulties with those theories, however—not the least of which concern layered strata that are uniformly carved without regard to the hardness or the permeability of the rocks.

Gigantic buttes and buttresses are invariably shaped in sweeping curves that meander through the landscape for hundreds of miles. Interspersed with the vertical ridges (most with their bases surrounded by thirty-degree “shoulders”) are ancient cone-shaped vents and deep canyons with terraces and thin fractures in the rock face. The formations, particularly those found in the Canyon de Chelly region, are somewhat reminiscent of Martian areography.

Grand Staircase-Escalante National Monument and the Capitol Reef National Park provide remarkable examples of stone monoliths, valleys, arches and cliffs that cannot be easily explained by the terrestrial forces of weather. Because figures on Mars resemble those on Earth, and Mars has virtually no atmosphere and no water, what force can sculpt the shapes on both planets?

Domes and other uplifted terrain can be found in many places on Earth. The Brandberg Massif is one example of a gigantic stone mound that rises out of flat topography, surrounded by incised striations and Lichtenberg figures burned into the rocky overburden. In the Navajo Mountains of Utah are many unique features.

Also found in the local environs are the “reefs” for which Capitol Reef National Park is named. These curvilinear, dual-ridge structures are comparable to those in the Massanutten Mountains of Virginia, or the Zagros Mountains in Iran. Worth mentioning are the “lava dikes” that sweep away from the central complex of Shiprock, New Mexico, as well.

Since wind and water erosion seem inadequate to explain these features, especially in light of the correspondence between them and those found on Mars, the explanation for their similarity can most likely be traced to electrical activity.

It appears as if tremendous forces gripped the Earth and wrenched pulverized masses of stone out of the surface in powerful, vertical electric fields. Coupled with traveling currents of electricity in the manifold trillion-joule range, the subsurface materials were literally exploded into space or thrown to the winds for thousands of kilometers, resulting in today’s geography.

The focus of an ion beam large enough to cut out and take away sedimentary deposits weighing billions of tons is not easy to contemplate. The energy requirement is so great that there appears to be no way that it can be generated: what could launch a bolt of lightning that powerful? Indeed, what could launch hundreds or thousands of such bolts? Looking outward, our planetary neighbors also bear the scars of forces that are difficult to explain. The moons that circle them are half-melted balls of slag peppered with hexagonal craters and scarps 10 kilometers high that cut through other terrain like a hot knife.

Electricity is the only way to explain so many observational similarities in so many environments at so many scales That is one crucial issue that Electric Universe scientists continue to explore.