Home Picture of the Day Cross with the Sun

Cross with the Sun 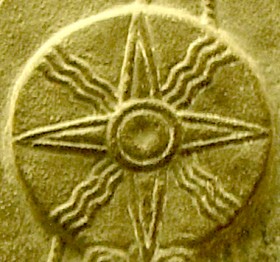 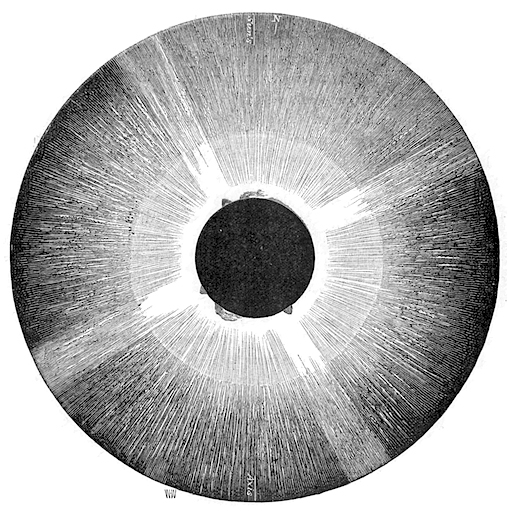 Left: The ‘sun disc’ or ‘disc of Shamash’, a detail from the ‘sun-god tablet’ (c. 860-850 BCE), discovered in a foundation deposit in the Temple of Shamash at Sippar, ‘Iraq. Courtesy British Museum, London, United Kingdom. © Marinus Anthony van der Sluijs. Right: The total solar eclipse of 18 July 1860 seen at Lambaesis (Algeria), a woodcut based on a drawing by the French astronomer Charles Bulard. © Bulard 1860.

The ancient Babylonians represented the sun god, Shamash, by the ‘disc’ or ‘wheel’ shown on the left, which they called shamshatu or nipḫu. Attested since the 23rd to 21st centuries BCE, this icon presents a puzzle, as the sun does not normally feature an enclosing ring surrounded by triangular and bundled wavy rays arranged in the form of two combined crosses. Unfortunately, the Akkadian literature furnishes few clues as to the interpretation of the ‘symbol’. The ‘wheel of Shamash’ does not appear to feature in any myths, certainly not in the context of creation mythology, and its ritual function is largely shrouded in obscurity. One comes across innumerable ‘sun crosses’ in rock art and iconography worldwide, but these are not very helpful either, as their relationship with the sun is typically assumed – for all one knows, these combinations of circles and crosses may have nothing to do with the sun whatsoever.

Babylonian scientists excelled in observational astronomy. Crucially, the solar corona as viewed with the naked eye during total eclipses occasionally presents the form of a cross, associated with an inner circular band around the photosphere. Detailed reports of the cruciform corona are available especially from the 18th and 19th centuries, when eclipses still exerted enough fascination for astronomers to commit the minutiae of observation to writing. For example, Roger Cotes (1682-1716) wrote as follows to Sir Isaac Newton (1642-1727) regarding the event of 3 May 1715:

“I took the greatest part of this remaining light to proceed from the Ring which incompass’d the Moon at that time. As nearly as I could guess, the breadth of this Ring was about an eighth or rather a sixth part of the Moons Diameter, the light of it was very dense where it was contiguous to the Moon but grew rarer continually as it was further distant, till it became insensible: its colour was a bright clear white. I saw this Ring begin to appear about five seconds before the total immersion of the suns body, & it remain’d visible to me as long after His emersion. … Besides this Ring there appear’d also Rays of a much fainter Light in the form of a rectangular Cross … The longer & brighter branch of this Cross lay very nearly along the Ecliptick, the light of the shorter was so weak that I did not constantly see it. The colour of the Light of both was the same …”

‘For the duration of total obscuration, one perceived a luminous circle around the moon, forming four cones or pyramids of light opposed at their bases; but of which the two longest ones were in the direction of southwest & of northwest: this circle & these four cones of light gave enough clarity to distinguish, though with some trouble, the time indicated on watches.’

And watching the eclipse of 18 July 1860 from Algeria, the French astronomer Charles Bulard noted:

‘The halo was mainly composed of an annular zone of a glowing white, in the bosom of which more or less brilliant rays took birth. At first glance, one distinguished four large beams forming a clearly marked cross.’

The cross-shaped avatar of the solar corona offers a tempting explanation of the ‘wheel of Shamash’, but questions remain. In physics, how is the joint coronal morphology of cross and inner band to be explained? All of the cited eclipses were total, not annular, so the ‘ring of fire’ may not be the periphery of the photosphere left uncovered by the moon in apogee. And in symbolism, why are the streamers seemingly bounded by an outer circle? And why was the ‘sun disc’ often represented upon a pole?

Presumably, cross-pollination with other transient phenomena occurred. Notable among these will be the parhelic cross, a type of solar halo which was, for example, encountered on 12 April 1934 in Antarctica by the American admiral Richard Evelyn Bird (1888-1957):

“… once in the golden downpour a slender column of platinum leaped up from the horizon, clean through the sun’s core; a second luminous shadow formed horizontally through the sun, making a perfect cross.”

Another possibility which should not be crossed out too soon is that of auroral crosses. It is easy to see why the aurora was often regarded as a ‘night sun’ and reports of cross-shaped aurorae are not hard to find. On the night of 27 August 1581, a scribe in the office of Stephen Báthory (1533-1586), grand duke of Lithuania, noticed “signs in the sky, resembling pillars like two armies of cavalry, and others resembling crosses. But there is no miracle here, and is likely to be some game of nature, an evaporation or the like”. Nevertheless, the physics underlying the formation are in need of elucidation.

The auroral option crosses over into even more speculative alternatives. If the Babylonian sun god originally belonged in a category of anomalous, former ‘suns’ associated with creation mythology, his disc may perpetuate the memory of prominent constituents of the famed axis mundi – a radiant plasmoid formed in an atmospheric plasma z-pinch at a time of extreme geomagnetic instability. At the crossroads of so many theoretical possibilities, the safest approach will be to avoid any sweeping statements and proceed on a case-by-case basis. Only the most meticulous cross-examination of sources will be able to disentangle this Gordian knot.