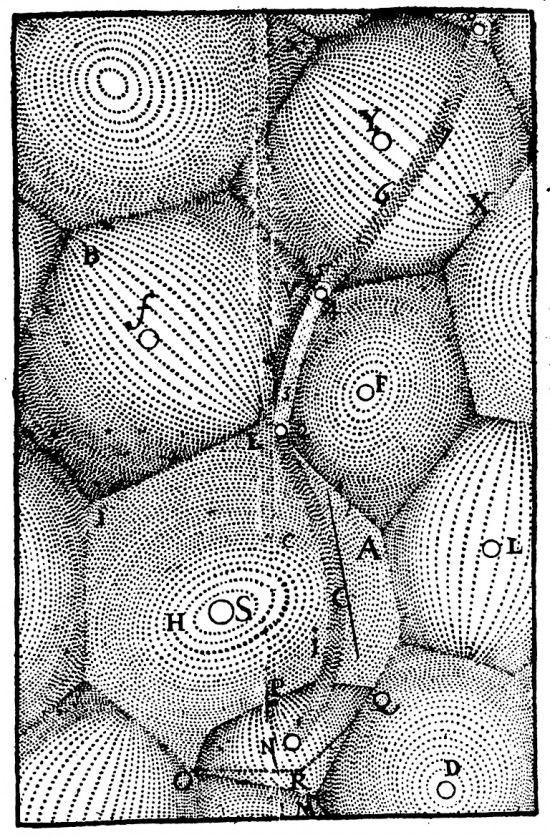 By what physical mechanism do planets and moons orbit around their larger hosts?

Before Newton’s theory of gravity burst onto the scene, the so-called ‘vortex theory’ of the French philosopher René Descartes (1596-1650), first proposed in the 1630s, was much in vogue. Invoking experimental analogues in fluid dynamics, this held that the ‘empty space’ between astronomical bodies is really a subtle fluid, which rotates in countless vortical maelstroms, one for each star or planet, carrying the satellites along in their flow. The vortices vary in size and are contiguous as well as nested. Descartes dubbed each vortex a ‘heaven’, a term akin to our ‘systems’ around the sun and other stars.

It is worth revisiting this antiquated model in the light of current knowledge regarding plasma structures in space. Descartes confidently declared:

“Now that we have, by this reasoning, removed any possible doubts about the motion of the Earth, let us assume that the matter of the heaven, in which the Planets are situated, unceasingly revolves, like a vortex having the Sun as its center, and that those of its parts which are close to the Sun move more quickly than those further away; and that all the Planets … always remain suspended among the same parts of this heavenly matter. For by that alone, and without any other devices, all their phenomena are very easily understood.”

At the time, the suggestion of the solar system as a giant whirl may well have seemed fanciful and contrived, but since the Space Age astronomers have learned of the solar wind, the embodiment of the heliomagnetic field which extends outwards through the interplanetary medium towards the far ends of the solar system, encompassing all of the planets and moons. As the sun’s magnetic field rotates on its axis, the plasma composing the outflowing solar wind performs a cyclical dance producing Parker’s spiral’, less prosaically compared to the flaring skirt of a ballerina. In a very real sense, Descartes’ solar vortex proves to be a verity.

In Descartes’ cosmos, the tails of comets follow the contours of the vortices through which they move. Stars and planets may, in fact, have their own comet-like tails: “Then, with regard to the fixed stars, … if some tail appeared around them, it would have to be {equally} distributed on all sides, and consequently very short … In fact we do see such hair around them; for their figure has no uniform outline, and they appear surrounded by indistinct rays on all sides …” And “as far as Jupiter and Saturn are concerned, I do not doubt that they too sometimes appear with a short tail on the side away from the Sun, {in countries} where the air is {very clear and} very pure.” The details may not all match, but with these insights Descartes prefigured the modern understanding that the heliosphere as well as planetary magnetospheres are distorted by their enveloping mediums, often in the comet-like shapes of a teardrop or windsock.

Descartes postulated that highly rarefied matter flows between the vortices along specific pathways, as “the poles of each of the vortices of the heavens touch those parts of other vortices which are distant from their poles” – their equators, in other words. He envisioned circuits joining different systems via their equatorial planes: “… it can be known that the matter of the first element flows continuously from the other surrounding vortices toward the center of each vortex through the parts adjacent to its poles; and that, vice versa, this matter flows out of each vortex, into the other surrounding ones, through the parts remote from its poles.” Do stellar winds communicate with each other? Galactic cosmic rays provide no match, as they propagate in any direction. Descartes’ cosmic highways sound more like electrical currents – Birkeland currents – traversing the vastness of space with their entrained magnetic fields.

“But when the matter of the first element reaches the body of the Sun or of another star, all the most agitated of its tiny particles strive to unite there in similar movements … they sometimes form very large masses, which, being immediately contiguous to the surface of the heaven, are joined to the star from which they emerged. There they resist that action in which we stated earlier the force of light consists; and thus are similar to those spots which are usually observed on the surface of the Sun. … Thus it is evidence that the matter of the Sun, bubbling on both sides from its poles toward the equator, must reject like a scum the grooved particles and all those others which easily adhere to one another …”

The general orientation of incoming matter towards equators rather than poles explains why sunspots prefer the solar equator, thus the savant. Moreover, as “there are many pores in the spots through which the grooved particles pass freely”, the sun also facilitates a stream of returning particles which “move away toward the heaven” and thence “easily move toward other vortices”. This outward flow results in “an aether around the Sun and stars”: “Rather, adhering somewhat to one another, they form there a certain large and very rarefied mass, similar to the air (or rather the aether) which surrounds the earth; this may extend on all sides of the Sun as far as the sphere of Mercury or even beyond. Yet this aether cannot increase indefinitely (although new particles are always coming to it from the dissolution of the spots) …” In other words, Descartes correctly anticipated the involvement of magnetism in the formation of sunspots as well as the corona. The ejection of coronal mass from sunspots and the resulting transformations in the corona and the solar wind are more or less in line with Descartes’ general mechanism of matter flowing between vortices via their central stars.

Did Descartes, then, conceive of the vortices as magnetic structures? Arguably so, in a roundabout way, for he observed that magnetic field lines “form a sort of vortex around a magnet just as they do around the Earth”: “… after these grooved particles have traversed the whole intermediate Earth from one hemisphere to the other along straight lines, or lines equivalent to straight, parallel to its axis; they return through the surrounding aether to that same hemisphere through which they earlier entered the Earth; and thus flowing through the Earth again, form a kind of vortex.” The same principle may apply on the scale of a vortex: because the particles moving into a vortex “approach the center of the heaven from opposite directions, that is, some from the South {pole} and some from the North, while the whole vortex rotates in one direction on its axis, it is obvious that those coming from the South pole must be twisted in exactly the opposite direction from those coming from the North. And this fact seems to me very noteworthy, because the force of the magnet … mainly depends upon it.”

Writing well before experimentalists of the European Enlightenment turned their attention to electrical apparatus, Descartes emerges as an ideological forerunner of plasma cosmology with his intuitive understanding of what are now called rotating stellar winds with comet-like forms, interstellar and interplanetary Birkeland currents and the magnetic interface of sunspots and the solar corona.

To supplant the vortex theory laid out in Descartes’ Principia Philosophiae was one of the express objectives of Newton’s Principia Mathematica. Yet Descartes’ speculative tour de force remained a potent contender long after the appearance of Newton’s magnum opus, doing the rounds on the European continent until the mid-18th century. Perhaps the contest foreshadowed the current debate between astronomers favouring a gravity-only theory of stars and galaxies and ones allocating an important rôle to plasma and the electromagnetic force.

Typical for the age of religious oppression in which he lived, Descartes had to cover himself feigning disbelief in his own ideas to avoid the wrath of church police. If today’s intellectual climate is any less stifling, adventurous parallels between Descartes’ ideas and the plasma universe may be explored unapologetically. Can stars adopt planets, as the philosopher supposed happened to the earth and other planets when their own vortices disintegrated? And do planets solely ‘fall’ gravitationally or do their orbital and axial revolutions owe anything at all to the solar wind which is now known to continuously sweep past like a revolving lighthouse beam?

However the matter turns out, Descartes’ conception of a solar vortex carrying the planets in its windings was one circular argument which remains acceptable to logic.