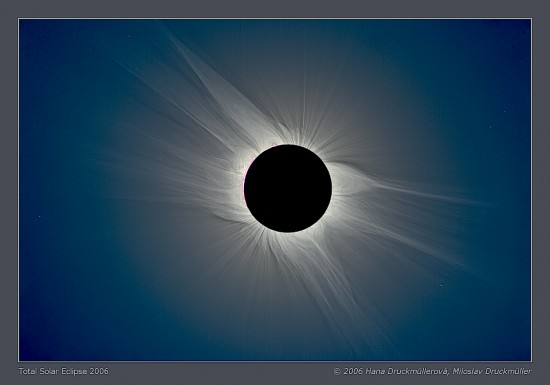 The solar corona during a total eclipse in 2006. Credit: Hana Druckmüllerová, Miloslav Druckmüller

What causes the solar wind to accelerate away from the Sun?

NASA launched the Wind spacecraft on November 1, 1994, sending it into orbit around the L1 Lagrange point because it is an ideal position for solar observatories. The five Lagrange points represent two stable and three unstable positions. L1 offers a clear view of the Sun, so Wind, SOHO, and ACE were placed there.

Wind was launched in order to gather data about plasma and its interaction with solar and terrestrial electromagnetic fields. One of Wind’s past discoveries was electromagnetic pulses called “short large amplitude magnetic structures”, or SLAMS.

Field aligned ion beams have been known to reflect off of Earth’s magnetosphere, but until Wind passed through both SLAMS ion beams, it was unclear how they formed. Without SLAMS, solar wind ions would slide around Earth’s magnetospheric boundary. However some of them are reflected by what NASA scientists call a kind of “magnetic mirror” that causes them to collimate into a coherent, narrow beam. From an Electric Universe perspective, the pulses and beams are most likely acting like Bennett pinches in the Birkeland current filaments that connect Earth to the Sun.

According to a recent press release, astronomers using data from Wind think they have come up with an explanation for how the solar wind is accelerated and heated. It is unfortunate that their terminology when describing the energetic ions ejected from the Sun includes such statements as, “steam from a pot of water boiling on a stove”, as if the Sun were evaporating into space. Regardless of the wording, the theoretical means by which the solar wind accelerates is known as “ion cyclotron waves”.

As the NASA announcement states: “…ion cyclotron waves emanate from the Sun; coursing through the solar wind, they heat the gas to millions of degrees and accelerate its flow to millions of miles per hour.”

In an Electric Universe where electric stars are dominant, wave functions are not necessary when dealing with what conventional astrophysics calls “anomalous acceleration”. The solar wind receives its impetus from an electric field that emanates from the Sun in all directions. The easiest way for charged particles to accelerate is within such a field. The Sun’s e-field extends for billions of kilometers, ending at the heliospheric boundary, which the twin Voyager spacecraft are just now beginning to penetrate. The “mysterious” acceleration of positively charged solar wind particles is an electrical phenomenon that is predicted by the Electric Sun model.