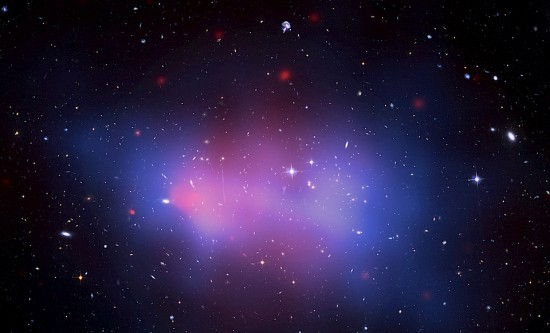 The largest galaxy cluster is said to contain a majority of dark matter.

“One can show the following: given any rule, however ‘fundamental’ or ‘necessary’ for science, there are always circumstances when it is advisable not only to ignore the rule, but to adopt its opposite.”
— Paul Feyerabend

Previous Picture of the day articles argue against dark matter theory. Dark matter is supposed to be what holds the Universe together. However, modern telescopes are not able to see it because it does not interact with luminous matter, except, as theories state, gravitationally. Since galaxies spin through the cosmos, as well as move away from each other, there “must be” something holding them together. Conventional theories suggest that not enough normal matter is present to account for the mass that galaxies and clusters must possess in order to behave the way they do.

As long ago as 2007 serious doubts about dark matter theory were already published. Unreliable data collection methods from the Wilkinson Microwave Anisotropy Probe (WMAP) research team cast a shadow on the so-called “Lambda Cold Dark Matter” theory. In 2010, scientists at Durham University also expressed concerns with the errors in WMAP results about the Cosmic Microwave Background Radiation (CMBR). The CMBR is supposed to be the “remnant signature of the Big Bang,” so problems in its analysis could have even further-reaching consequences.

The two principal tenets of Big Bang theory are that redshift is proportional to distance and that it is an indicator of velocity. The larger an object’s redshift, supposedly the farther away it is and the faster it is moving away from the observer. Those two ideas provide the backdrop for the commonly held belief that the Universe is expanding. “Dark energy” is another aspect of the idea, however it is not the subject of this paper. If the WMAP data is inaccurate, then there is a question regarding expansion of the Universe and the Big Bang.

In the image at the top of the page, a galaxy cluster known as ACT-CL J0102-4915, located 7 billion light-years from Earth, as astronomers measure distance, exemplifies that concept. The cluster, called “El Gordo” because of its great mass, is the hottest, and gives off the most X-rays of any cluster yet detected. Information provided by the Hubble Space Telescope indicates that it “weighs” about 5 X 10^45 kilograms—or as much as 3 quintillion times the mass of the Sun. The problem is, there are too few galaxies in the cluster for it to have the “cometary aspect” that can be seen in other images.

Hubble’s data seems to indicate that the cluster’s mass is mostly dark matter (shown in blue). The comet-like appearance is (according to astronomers) due to normal matter (pink and red) being torn loose from its dark matter counterpart. The X-ray emitting “hot gas” is said to be slowing down because the cluster is really two galaxy clusters crashing into each other at millions of kilometers per hour. The collision is not slowing down the dark matter, giving rise to a tail.

In an Electric Universe, dark matter is an unnecessary fiction about how stars and galaxies interact with each other. Galaxy clusters, for example, should have slowed down considerably over the last few billion years of space-time expansion and not maintained such wild velocities. Some galaxies, say astronomers, are moving so fast that they are hard on the heels of light speed.

If astrophysicists sat down with plasma physicists, it would be apparent that El Gordo, like many other celestial objects, is exhibiting electric z-pinch effects because of rotating Birkeland currents in its “tail”. One of the hallmarks of plasma foci is that they glow in high-energy X-rays, gamma rays or ultra-violet, depending on how much charge density exists. In a cluster like ACT-CL J0102-4915, the electrical output from trillions upon trillions of stars is available. Such structures will tend to form regions of high density where charged particles are forced together into “plasmoids“. That is most likely what is happening at the scale of galaxy clusters thousands of millions of light-years in extent. They coalesce into gigantic whorls of energetic ions that suddenly ignite with the force of a star.

It is electric currents that drive clusters, galaxies, and stars. Electromagnetic vortices between large-scale Birkeland current filaments create galaxies. Birkeland currents have a longer-range attractive force than gravity, and diminish with the square root of the distance rather than gravity’s square of the distance. That alone could account for the anomalous movement of stars as they revolve around galactic cores, or the energetic emissions from galaxy clusters.

The flow of electricity through plasma in space initiates the effects that are seen through space-based telescopes, confirming ground-based research. As Electric Universe advocate Wal Thornhill wrote: “Plasma cosmology can demonstrate with simple physical principles the electrical formation and behavior of spiral galaxies and stars without recourse to hypothetical dark matter…”