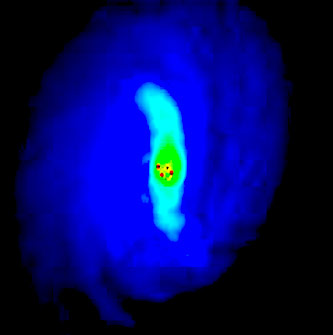 Previous Picture of the Day articles repeatedly take issue with the idea that black holes are part of the Universe. It is a common expression in astronomical reports that black holes inhabit the centers of “more than 98%” of all galaxies. They are called supermassive black holes in the scientific press because they are thought to possess gravitational masses greater than several million stars.

The descriptive terminology used by researchers is problematic, relying on highly speculative explanations derived from loose interpretations. Ambiguous lexical labels such as space-time, singularities, infinite density and other ideas that are not quantifiable have introduced irony into what should be a realistic investigation into the nature of the Universe.

Recently, astronomers from the Swinburne University of Technology announced that “huge young star clusters resembling a string of pearls” are orbiting the center of NGC2110 in the constellation Orion, as their computer simulations predicted. Since black holes are supposed to have an accretion disk of material spinning around them, as well as jets of highly energized particles, that information was used to define the predictive behavior of their algorithms. It is no surprise that forgone conclusions are revealed by data supplied by instruments designed to detect those conclusions.

According to conventional theories, black holes form when a star with a mass greater than five times that of the Sun fuses its hydrogen fuel into heavier elements, causing it to collapse under the force of its own gravity when the radiative output is no longer able to “push back” against that force. The equations that describe gravity can be manipulated in irrational ways, so some solutions imply that such large stars can contract into a zero volume containing almost infinite inertial mass.

As the theories suggest, black holes possess a gravitational attraction of such intensity that not even electromagnetic radiation can escape their event horizons. Therefore, no direct evidence of a black hole’s existence can be measured, only the hypothetical effects of extreme gravity. Along with accretion disks and jets, gamma ray emissions, X-rays and extreme ultraviolet radiation are thought to result when gas and dust become compressed into smaller and smaller spaces before being drawn down into oblivion.

Rather than arcane mathematical reifications, Electric Universe advocates think that all of those observations can best be explained by examining electrical activity in space. Hannes Alfvén identified the “exploding double layer” as a new class of celestial object. Double layers in space plasmas form most of the unusual structures that are observed.

Instead of gas and dust “crashing into” an accretion disk around the center of NGC2110, it is more likely that it is an expulsion disk of material. Hannes Alfvén also theorized “electric galaxies” as early as 1981. Alfvén observed that galaxies resemble homopolar motors. A homopolar motor is driven by magnetic fields induced in a circular aluminum plate or some other conductive metal. The metal plate is placed between the poles of an electromagnet that cause it to spin at a rate proportional to the input current. Galactic discs behave like the conductive plates in said motor.

High frequency radiation from plasmoids is similar to that from electrically excited stars. A strong electromagnetic field in a plasmoid accelerates particles to high speed, causing them to spiral in the resulting magnetic field and emit X-rays and gamma rays. It is NGC2110’s plasmoid that generates its expulsion disk, causing star clusters to form along the field-aligned electric currents.