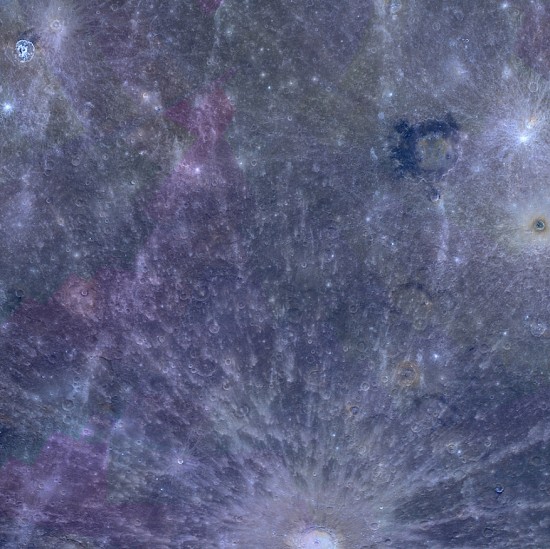 The MErcury Surface Space ENvironment GEochemistry and Ranging (MESSENGER) mission has been ongoing since August 2004. The satellite is orbiting Mercury, where it is conducting observations of the torrid planet’s domain. A recent color mosaic of Mercury reveals that some areas are much hotter than others. In the image at the top of the page, 996 nanometers corresponds to a temperature of about 226 Celsius, the temperature inside of a hot oven.

One of the more intriguing discoveries is the sodium tail that was found streaming away from Mercury. In an Electric Universe, tails are created when an object’s plasma sheath accumulates enough electrical potential to discharge, causing it to glow. Irrespective of their individual composition, “cometary tails” obey the fundamental behavior of charged objects within a plasma shell.

Since Mercury is a barren world, with no atmosphere and a negligible magnetic field, it experiences radiation from the Sun at full force, similar to Earth’s Moon, only of much greater intensity. As previous Picture of the Day articles argue, lunar phenomena can be explained by electrical activity, so Mercury might be experiencing similar electrical effects. Jupiter’s moon Io might also be a useful model.

Io orbits Jupiter so closely that it is bombarded by electromagnetic radiation, “sputtering” approximately one ton per second from its surface. That electromagnetism causes Io to act like a generator as it moves through Jupiter’s forcefields, creating a flow of electric charge between the two bodies greater than three million amperes.

Mercury is most likely experiencing something similar to Io, because it revolves around the Sun in only 88 days. That velocity, as well as its close proximity to the Sun, could be why it has such a long ion tail—more than the width of four full Moons in the night sky. Electrical erosion might also explain why its tail is filamentary, the same as comet tails, and even tails extending from galaxies for thousands of light-years.

It might also be argued that craters on Mercury are primarily due to electricity. Most of them are flat-floored, with steep sidewalls, little or no blast debris surrounding them, and often possessed of smaller craters on their rims. A few exceptionally large structures are multi-ringed, like other formations elsewhere in the Solar System. As discussed in the past, such characteristics are a sign of electric arcs touching down on a charged body.

More information about Mercury’s “volcanic past” has also recently been published. However, the conclusions drawn by planetary scientists betray a geocentric attitude. It is an error to use Earth-based geological theories when attempting to explain what is found on other planets and moons. Such false trails lead to ideas like “cryo-volcanoes” (on Triton), floods of water (on Mars), and tidal kneading (on Io), in order to interpret anomalous discoveries.