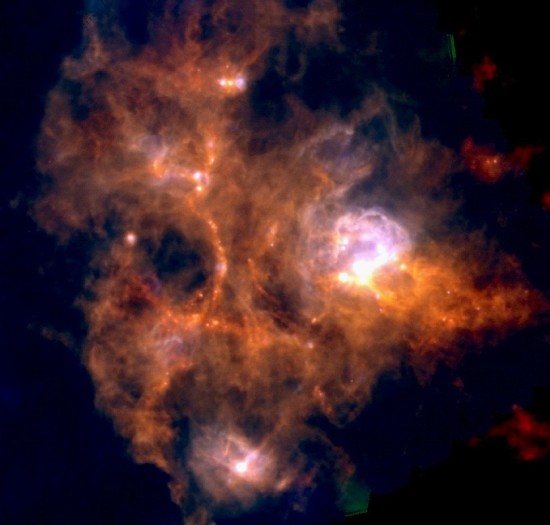 Part of the nebula, NGC 7538 in the constellation Cepheus. Credit: ESA/Herschel/PACS/SPIRE

Are stars born in cold clouds of gas and dust?

The Herschel Space Observatory entered orbit around LaGrange point L2 in July 2009, so that its sensitive instrumentation would not repeatedly heat up and cool down, as it would have passing through Earth’s shadow. Since L2 is “gravitationally balanced” as well, it makes for a stable viewing position, requiring only small, monthly “correction burns” to keep it steady. Herschel’s 2300 liters of helium coolant was designed to last for three years, beginning with its May 2009 launch date. However, careful management allowed for a longer mission than originally planned, so its helium held out until April 29, 2013.

According to a recent press release from the European Space Agency (ESA), a so-called “star factory” was detected in NGC 7538, exhibiting massive protostars up to 40 times larger than the Sun. However, those “stars” are not visible to optical telescopes, because they are radiating at -250 Celsius and shine only in infrared light. In the image at the top of the page, the false colors correspond to three different wavelengths: 70 microns (blue), 160 microns (green), and 250 microns (red).

As conventional astrophysical models suggest, the forces that shape stars are attributed to the collapse of cold gas under gravitational influence. Common viewpoints see stars as whirling vortices of compressed matter heated to fusion temperatures by pressure, alone. Gravity is said to draw together clouds of gas and dust that are far less dense than a puff of smoke. Considering that the Interstellar Medium is thought to contain a mere ten atoms per cubic centimeter, those clouds are indeed sparse. Irrespective of their ghostly structure, the clouds coalesce, coaxing even more material to collect. Eventually, the pre-stellar matter can no longer resist the inward gravitational attraction, and it falls down the well of nuclear fusion, initiating a self-sustaining reaction.

There is a catch to the process. The gas and dust must be extremely cold, otherwise thermal radiation generated by the friction of collapse would cause the cloud to dissipate instead of squeeze down into a star. How the cold is supposed to prevent the “star stuff” from heating up is not explained. If something is cold, but then it is crushed into a tiny volume, its temperature will rise regardless of its initial state. Many astronomers admit that their theories are lacking, but they are the best they have.

As stated many times in previous Picture of the Day articles, the Electric Star theory provides solutions to the puzzles and confusion so often expressed in science journals. As mentioned in Stars Go Boom, a fundamental aspect of the Universe is that it is almost entirely composed of plasma. Plasma responds to electrodynamic forces and not only to gravity. Those wisps of gas and dust so dear to astronomers are not electrically neutral, since plasma forms double layers that create a flow of electric charge.

Charged particles in motion constitute an electric current that forms plasma filaments in nebulae. Electric currents are accompanied by magnetic fields that wrap around the filaments, diminishing in a 1/r relationship with their distance. This means that plasma filaments are probably the most powerful long-range attractors in the Universe, drawing charged matter toward them, incidentally dragging the neutral molecules along for the ride.

NGC 7538 exhibits those filamentary structures. Along the strands of electromagnetically confined plasma, Bennett pinches occur, crushing plasma into tightly confined spaces. As the filaments become more narrow, the magnetic fields increase, compressing the plasma ever more tightly. Eventually, the pinch effect causes plasmoids to form along the filament. Thus, stars are born from an electrical parentage like beads on a string.