Home Picture of the Day The Jurassic Coast – a Transmutation Extinction?

The Jurassic Coast – a Transmutation Extinction? 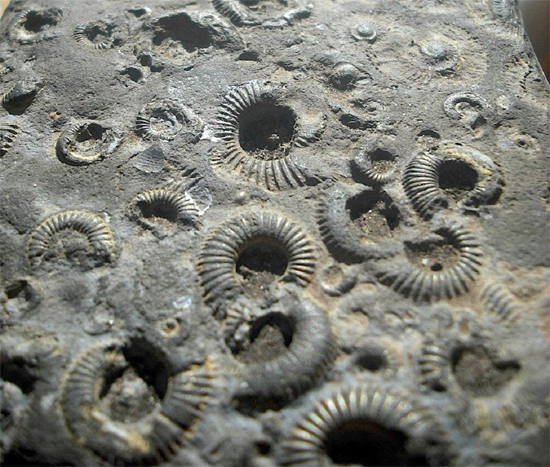 Ammonites look like a squid with a shell, and are now extinct.

Paleontologists claim they lived between 400 million and 66 million years ago. Fossil ages are usually determined by the ages of the rock layers in which they’re embedded. What caused their mass extinction, and what fossilized their numerous remains?

We went down to the old fishing port of Lyme Regis in Southern England to dig into the theories used as explanations for their demise. This “Jurassic Coast” is renowned as a fossil collectors paradise. But the questions that leap at you as you study the acres of buried fossils is more exciting than the intricate appeal of the Nautilus shaped shells! How on earth did millions of squid-like marine creatures get submerged in limestone rock? They are plainly visible, glaring up at you, from within this rocky beach plateau.

The ammonites have been mysteriously turned from watery marine bodies to rock. Incredibly, they are encased in limestone, as if in the very act of swimming. In other parts of the world, they have been transformed into opals or even petrified into flint hard rock. Sectioning of the Ammonite fossils reveals their internal organs in minute detail. What force of nature transmuted these squid-like creatures into rock? It certainly must have been an instantaneous process, for what dies is quickly recycled unless some geological intervention occurs. That intervention petrifies biological matter, and is almost always connected to the cause of death. Not just one fossil is found, but a vast mass extinction!

What tool of nature fossilized these once watery marine Ammonites? We have a powerful clue. Eric Milton describes his examination of a petrified tree trunk (essentially water and carbon) in Alberta, Canada:

“The piece was pure clear silica inside, it was coated with a rougher opaque crust of partially fused sand. The tree, whose stump was petrified, was alive five years ago! After the tree was cut down to accommodate the right of way for a new power transmission line, an accidental break allowed the live high-voltage wire to contact several tree stumps still in the ground. The power was cut off within hours of the break. All of the tree roots which contacted the broken wire were fossilized.”

As much as we stretch our credibility to explain fossilization and petrification of watery, living animals, there is a bigger question. What about the medium these very animals are preserved in?

In Hot Springs, South Dakota, mammoths and many other animals are found immersed in micro-layers of limestone. As paleontologist Dr. Larry Agenbroad explained to me, the mammoths themselves are barely distinguishable from the medium they are immersed in. Micro-layers of limestone permeate down the entire 100 foot deep mass of this volumetric disaster. If this was an electric plasma discharge event, how did it cause this amazing layering in an instant? It is plain that no slow deposition of layers was involved, otherwise the animals would have biologically deteriorated before being buried. This is still an unanswered question. Nevertheless rapid burial seems to be a prerequisite to preservation.

A similar case study exists with the Jurassic Coast Ammonites. These marine creatures of all sizes, (up to 5 feet across) were buried instantaneously in a calcium medium (limestone is calcium carbonate). It is then we begin to speculate: could the medium in which the fossils were originally found become subject to the same transformation process as the fossils themselves? Could plasma discharge change water into limestone? Big question with only speculation as the answer. But let’s go through the chemistry.

H2O, or water, is two elements, hydrogen and oxygen, with 10 protons. Calcium, (the basic stuff of limestone) has a proton count (or, atomic number) of 20. This is twice that of water. All that is theoretically needed to convert water to calcium is an abundance of neutrons. Lightning discharge is recorded as producing an abundance of neutrons. Feasible? Yes. Possible? Maybe, but certainly a trail to be investigated. Transmutation by plasma discharge events, and or plasmoid production from cosmic events, is a pioneering field waiting and ready to unravel geological upheavals.