Home Picture of the Day Lightning as Sculptor 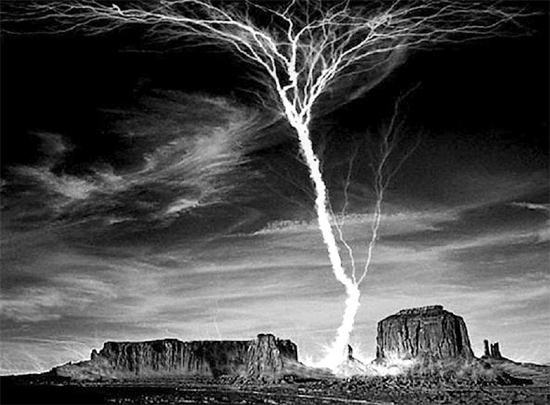 Could this be how the ancient wilds were carved? Credit: Stephen Smith

Mountain-building is a mystery.

One of the tenets of Electric Universe theory is that for some reason in the relatively recent past, the Solar System was electrically energized to a level that exceeds today’s experience by many orders of magnitude. Planets and moons were engulfed by plasma clouds that initiated lightning bolts of tremendous power, forming large craters, cutting canyons, and raising gigantic fulgamites.

The word, “fulgamite” is uncommon. It appears that it was used first in a paper published by R. D. Hill in the Journal of Geophysical Research 11/1963; Volume 68. Hill’s paper, Investigation of Electron Runaway in Lightning, mentions that the end caps of lighting rods would sometimes show “mounded” circular formations, “melted and raised above the surface of the metal.”

According to Ralph Juergens in his paper, Of the Moon and Mars, Searching For The Scars Of Battle (Pensée Journal II, 1974), “He [Hill] describes the sides of these fulgamites as ‘usually ridged with closely spaced concentric grooves’ and their bases as ‘usually flared like a bell’. And he remarks: ‘Sometimes the position of the strike is found to wander slightly during the formation of the mound [[as]] shown by the shallow development of the “borrow pits” [[concentric graben?]] from which the mound is built up’.

“Hill attributes the mounding-up of fulgamites to magnetic-pinch forces at the junction of the discharge with the electrode (lightning rod). His calculations indicate that such forces in a lightning column are easily adequate to raise metallic welts a centimeter or so in diameter, and they neatly account for the bell-shaped fulgamite surfaces as well. The concentric rings and ridges, in his opinion, are best explained as remnants of ripples set up in the molten surface during fulgamite formation by oscillations in the plasma of the lightning column.”

Electromagnetic pinch forces can be extremely powerful. They are capable of drawing charged particles toward them, which, in turn, drag neutral matter into the center of a compression region. The material is squeezed into a tightly confined area where it might become consolidated. This phenomenon occurs because of the “Bennett Relation“, named after Willard Bennett.

On the other hand, according to a recent press release, there is evidence that the Drakensberg mountains in Lesotho, Africa are being eroded by lightning and not by ice or heat, alone. In fact, as Stefan Grab and Jasper Knight, authors of the paper, state, lighting is the “main force shattering rocks on Drakensberg summits”.

Could it be possible that lightning bolts are not only carving mountains that presently exist, but also created those same mountains?

There are several formations in Australia that are illustrative of the point. Uluru (previously called Ayers Rock) is probably the most familiar. Uluru is composed of conglomerated stones and gravel, cemented by a matrix of sandstone. It is 3.6 kilometers long by 2 kilometers wide and rises to 345 meters above the plain. On top, it displays striations with narrow ridges running parallel, along with crater chains and clusters of deep potholes. Some have said that its morphological structure resembles Phobos, a moon of Mars.

Probably the most striking example of a geological formation that resembles a fulgamite is the Brandberg Massif in Namibia, also the topic of a previous Picture of the Day. It is a dome surrounded by peculiar striations and deep trenches covering hundreds of square kilometers. It is a singular formation without anything nearby to account for its position or its circular shape. Perhaps, like Uluru, it was crushed together out of the surrounding topography by Bennett pinch forces.

It has long been a postulate of Electric Universe advocates that the shapes of mountains do not conform to the theory of long, slow weathering. Since erosion by wind and water is a blurring and rounding process, the fact that mountain peaks are often pointed and angular suggests that they are not as old as they are thought to be. It is true that the debris on the tops of lightning scarred summits is angular and sharp, but there is far too little of it to account for their presumed great age. After all, if lightning has been splitting and cracking the mountains for millions of years, there ought to be signs of that extended activity.

In the image at the top of the page, the artist’s impression of past electrical events indicates that lightning erosion could have been far more devastating in the past, creating the fundamental shapes that are observed today. That basic order is now being sculpted by the same power as that in the past, but on a much smaller scale.

Lightning giveth and lightning taketh away.