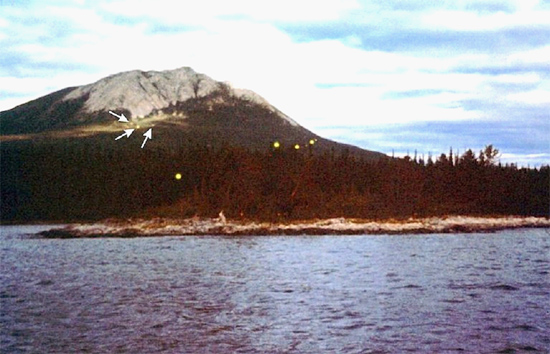 Luminous orbs are thought to be earthquake precursors.

For more than a century, eye-witness accounts claim that floating spheres of light can be seen in many locations around the world. Called “ball lightning”, “globular electricity”, and “foo fighters” among other names, they are said to be unusually bright, with strange characteristics.

One witness wrote that, “This luminous ball passed inside the room through the glass of a closed window, moved one meter into the room, made a 90 degree turn, moved further into the room parallel to the wall and then disappeared with a sharp loud blast. The ball had a violet-and-blue color tinged with red. The observation lasted three seconds. The ball caused no damage either inside or outside the room. After the explosion there remained an odor typical to electric discharges.” Reports of similar behavior can be found in dozens of other publications.

Along with glowing balls, “colorful streaks”, “luminescent clouds”, and “radiant skies” have also been observed. Although all instances of lights in the sky are not necessarily associated with earthquakes, according to a recent paper in the journal, Seismological Research Letters, electricity could be responsible for most of them.

A co-author of the paper, Dr. Friedemann Freund, is well-known to those associated with Electric Universe theory. In the Journal of Scientific Exploration, he wrote about his theories of earthquake prediction. His article, “Rocks That Crackle and Sparkle and Glow: Strange Pre-Earthquake Phenomena”, describes a mechanism where earth lights can be created when rock strata are compressed by crustal movement: “…igneous and metamorphic rocks, which make up a major portion of the Earth’s crust, contain electric charge carriers, which have been overlooked in the past. These charge carriers are defect electrons in the valence band, i.e., positive holes. Under normal conditions they are dormant, but when they ‘wake up’, the rocks begin to sparkle and glow.”

Freund conducted experiments several years ago that led him to develop these ideas. In 2003, he and his assistants monitored red granite blocks placed under a 1,500 ton press. As the pressure on the granite increased, sensitive detectors registered infrared emissions, as well as a voltage build-up on the surface.

Most rocks act like insulators, preventing the flow of electric charge. However, when placed under extreme pressure, they change state and can act like semiconductors. Freund’s conclusion was that before an earthquake, positive charges (so-called “defect electrons” in the crystalline matrix due to fracturing) relocate to the surface of stressed rocks where they recombine, releasing infrared radiation. It is why the voltage increases on his granite blocks, as well.

Along with his research into the electrical conductivity of various minerals under compression, he and his colleagues collected data about the occurrences of luminous phenomena and their relationship to earthquakes of magnitude 5 and greater. For instance, the image at the top of the page was taken just hours before the July 1973 Cross Sound earthquake.

As the latest paper states, when various strata are squeezed hard enough electric charge is liberated. Under suitable atmospheric conditions the electric charge may be visibly discharged into the air. Freund and his fellow authors propose that those electric discharges are what form the various phenomena that are observed. Since the discharges are seen hours, or even days, before an earthquake, they could be a major step forward toward predicting them.

Electric Universe theory also considers electric discharges through stressed strata in Earth’s crust. The build-up of charge across compressed rocks can cause sudden electrical breakdown. So, earthquakes could be considered a form of underground lightning. If earthquakes are underground lightning bolts, then perhaps seismic waves are the thunderclaps. In that case, it seems likely that the majority of energy released during an earthquake may not be from the fracturing and movement of strata, but the result of electrical energy released within the rock matrix.

Earth lights are the precursors and earthquakes the result of electricity flowing through our planet.