Home Picture of the Day Daughters of Pleione 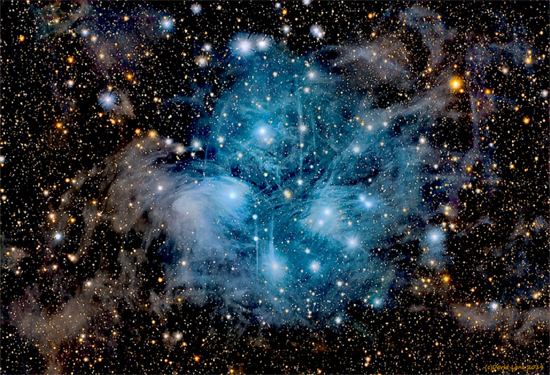 Does gas compression beget the stars?

The Pleiades is probably a familiar sight to most people, being visible in the winter skies all over the world. It contains more than 1000 stars, although only 14 are visible to the naked eye. It has most likely been known for thousands of years, especially since its name derives from ancient Greek mythology: the “seven sisters” were the daughters of Atlas, the Titan.

Recent observations indicate that the Pleiades are embedded in a cloud of ionized gas and dust that consensus astronomers say evolved from thousands of blue-white supergiants that exploded millions of years ago. The stellar blasts also “compressed gas and dust” in nearby regions, initiating the formation of other bright stars, including those in the Pleiades. Known as Gould’s Belt, astronomers believe that it is a 2000 light-year wide ring of stars that also includes many nebulae: the Orion Molecular Cloud and the Bug Nebula, for example, as well as several star clusters in the constellation Scorpius, among others.

Astronomers think that the reason for the tendril-like formations within the cloud surrounding the Pleiades is “pressure” from starlight pushing on tiny dust grains. Smaller particles experience a greater repulsion than larger ones, so they are thought to sort themselves according to their inertia.

In previous Picture of the Day articles, it was argued that nebulae and star formation are not the result of compression, shock waves, coalescence, or any other gravity-centric models that are rampant in cosmology today. Stars are said to require cold gas in order to form, otherwise thermal energy created by compressing the gas would impart too much outward pressure, preventing the putative thermonuclear reactions needed for stars to “ignite”. Nebulae are said to shine because they reflect the light from nearby stars; their colors vary according to the elemental motes within them.

Prevailing astronomical theories do not provide an adequate mechanism that can form nebulae and their energetic emissions. They do not know how stars “eject” their outer layers, thereby causing gas cloud to compress and form other stars. The reason for that lack of understanding is that nebulae are not composed of inert gas, cold or hot, but of plasma.

About 75% of the interstellar medium (ISM) is composed of hydrogen (molecular or atomic), and the remainder is helium. The ISM is partly neutral atoms and molecules, but a portion of it includes charged particles. If portions of a dusty gas cloud are ionized, then charge separation will build-up in nearby regions, forming a plasma.

When plasma moves through a cloud of dust and gas it initiates an electric field and the flow of electric charge. Electricity moving through any substance forms magnetic fields that tend to align and constrict the current. Those fields create what are sometimes called “plasma ropes,” otherwise known as Birkeland currents.

In an Electric Universe, plasma and magnetic fields form electric stars through enormous, diffuse Birkeland currents that power the galaxy, preventing plasma from dispersing inside their light-years long helical coils. When electric charge density inside the filaments gets high enough, the plasma will glow and “pinch” into plasmoids that could become stars.

When electrical stress is low and the plasma cloud also possesses some dust, only the stars in a nebula “light up” in arc-mode discharge. Where electrical stress is greater, as in M45, filaments, jets, and surrounding gas can also light up. Of course, dust clouds can reflect the light from nearby stars, but the Pleiades filaments and cell-like behavior are characteristic of plasma in laboratory experiments.