Home Picture of the Day Greenland: Once a Viking Paradise

Greenland: Once a Viking Paradise 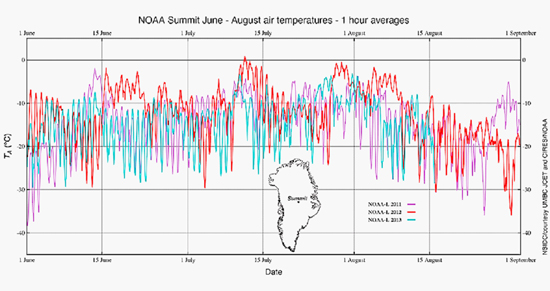 The “Little Ice Age” impact on Europe was sudden and ferocious.

Using its weapons of plague, famine and (perhaps controversially) earthquake, the so-called “Little Ice age” reduced the population of Europe by around 30 to 50 percent. The virulence and death toll of the 1348 AD plague is totally unmatched by modern examples. Further, the world mega-famine of 1315 AD, due to both weather and pestilence, was catastrophic. The relentless temperature drops combined with erratic weather are nearly impossible to explain, but mankind had no hand in its inception. What forces of nature caused this catastrophic scenario? Greenland is a classic example of death and abandonment. Let’s travel back in time and see what happened.

Although the Little Ice Age is a scientific reconstruction, it covers a period when there was a significant and chaotic down-turn in climate, compared to the present era. It is classified into four periods from around 1280 AD to 1850 AD. These erratic cold periods are referred to as the Wolf, Sporer, Maunder and Dalton weather minima. Those dramatic climatic deteriorations were not only cooler, wetter and windier on average, but also vastly more chaotic in their fluctuations, creating the prime ingredients for famine and (curiously) plague.

The Little Ice Age followed a period known as the “Medieval Maximum” that is dated to between 900 AD – 1280 AD, which copious records reveal was much warmer than modern times. For instance, grapevines grew in the area of today’s shivering Wales! This was generally a period of prosperity for civilizations. There was a large increase in world population and an era of colonial expansion. During the years 800 AD – 1200 AD, Greenland and Iceland were settled by the Vikings. The “Medieval Warm Period” allowed this great migration to flourish. Drift ice at later dates posed the greatest hazard to sailors but reports of drift ice in old records do not appear until the thirteenth century.

Greenland was settled when Eric Asvaldsson was banished from Iceland for killing two men. He converted his misfortune into the foundation of a new colony. The initial settlement was on a deep fiord on the south-western coast (next to today’s arctic Canada). Conditions were similar to Iceland, which was itself enjoying a warm temperate climate at that time. Chroniclers even mention swimming in Greenland’s Fjords! Totally impossible today.

The bones of cattle, sheep, pigs and goats collected from archaeological sites reveal the existence of large farms with large productive pastures in what is now often snow covered wasteland. Eric drew thousands to those three new areas. The Greenland Vikings lived mostly on dairy produce and meat, primarily from cows. Before 1300 AD, trade with European countries was brisk, with many ships plying to and fro trading timber, iron, salt and corn in exchange for furs, skins, butter, cheese and wool. Expansion was, in fact, prolific enough for the Pope to send a bishop to Greenland. Today only rare earth exports to China are viable trade goods.

The Little Ice Age dramatically changed this picture with the growth of glaciers down mountains in both Europe and China. Increased sea ice, severe and prolific storms, high rainfall and colder erratic climates became relentless. Thick sea ice, 3 miles wide, sometimes bordered the English Channel. It was a period when major plagues and famines ravaged the world. Chaotic weather, I will argue, is most likely largely due to cosmic influences. By that I mean electromagnetic forces!

These constantly changing cosmic influences caused Western Europe to experience a general cooling of the climate between the years 1150 AD and 1460 AD, and an even colder climate between 1560 AD and 1850 AD, creating dire consequences for the people living at the time. Not only was it colder, wetter and windier, but notably, the seasons became erratic! The colder weather impacted agriculture, health and economics, creating social strife and emigration. Increased glaciations, multiple severe storms and major floods and winds devastated society! Old sea logs and city records reveal all.

But what happened to the Vikings in Greenland? By the year 1300 AD more than 3,000 colonists lived on 300 farms scattered along the west coast of Greenland. Around 1200 AD, drift ice forced ships further south to reach the settlements on the south west coast alongside Canada. In the 1300’s Bardsson wrote: “From Snefelsness in Iceland, to Greenland, the shortest way: two days and three nights. Sailing due west. In the sea there are reefs called Gunbiernershier. That was the old route, but now the ice is come from the north, so close to the reefs that none can sail by the old route without risking his life.”

By 1500 AD, the Pope complained that no bishop had been able to visit Greenland for 80 years on account of the ice. His Greenland congregation was already dead! The graves and ruins show that the cold and lack of nourishment turned the average Greenlander from their 5′ 7″ to a severely crippled, twisted and diseased 5′ by 1400 AD.

The Little Ice Age minima was a harsh reality. But what were the causes? Certainly not higher carbon dioxide levels from mankind’s puny efforts! Let’s examine the part sunspot minima and maxima play on the climate stage as we try to understand the effect these cycles have on famine and plague. Sunspot activity, and therefore solar flux, are an ingredient in controlling our climate. Flux is the emission of various positive ions and electrons emitted by the Sun that mediate cosmic rays and thus, as Henri Svensmark maintains, weather and precipitation. Cosmic rays interact with the Earth’s magnetosphere at times, influencing drier, wetter, windier, hotter or colder variations in climate.

It appears that the eleven year solar cycle is linked to the severity of hurricanes and droughts. This is the thinking of the U.S National Centre for Atmospheric research (NCAR). Baker, from the University of New England, believes it is a vehicle to predict times of drought. His tracking of sunspots since records were kept in 1876 AD, shows that switches in the sun’s poles and magnetic field every eleven years consistently effect Australia’s weather.

Compilations of sunspot records, which have been kept for four centuries, fit in well with times of drought. At times of prosperity the sunspot activity is high. Grain prices are low. At low sunspot activity there are crop failures and high grain prices. Drought varies over a full twenty two year cycle with an eleven year maxima to minima turnaround time.

There must be a further factor that drives the whole sunspot cycle up and down to cause a Little Ice Age. It demands a cosmic cause! Historian Jean de Venette wrote a curious piece that may provide a clue to this unsolved climate mystery: “In the month of August, 1348 AD, after Vespers when the sun was beginning to set, a big and very bright star appeared above Paris, toward the west. It did not seem, as stars usually do, to be very high above our hemisphere but rather very near. As the sun set and night came on, this star did not seem to me or to many other friars who were watching it to move from one place. At length, when night had come, this big star, to the amazement of all of us who were watching, broke into many different rays and, as it shed these rays over Paris toward the east, totally disappeared and was completely annihilated. Whether it was a comet or not, whether it was composed of airy exhalations and was finally resolved into vapour, I leave to the decision of astronomers. It is, however, possible that it was a presage of the amazing pestilence to come, which, in fact, followed very shortly in Paris an throughout France and elsewhere”.

Comets throughout history have been portrayed as predictors of doom. Bright comets are often, historically, in conjunction with plague, famine and earthquakes. Is this mere coincidence? The dramatic electrical discharge of comet Shoemaker-Levy 9, as it split into 23 sections and assaulted Jupiter, is a landmark in modern cosmology. The impact of some comets into the Sun causing incredibly large Coronal Mass Ejections (CMEs) is equally hard to explain. Could comets have electromagnetic effects on weather, life and the geology of the Earth? It is still a mystery but one we are perhaps getting closer to understanding.

For Picture of the Day readers, free access to the film is available. Go to: http://www.mungoflix.com/mungoflix/free-video-greenland-vikings/