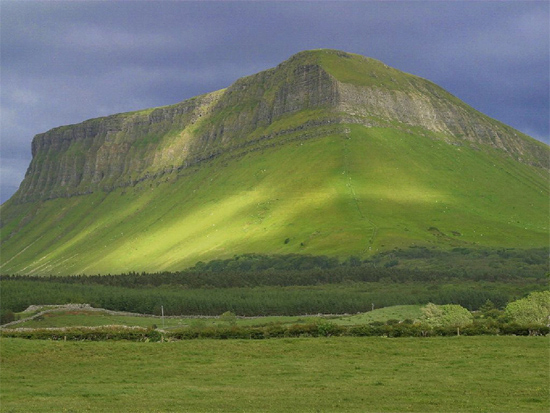 On every continent are examples of isolated stone mountains that are not easy to explain.

Mount Augustus in Australia is an example of a sandstone monolith that could be the largest of those monoliths that also includes Uluru. Mount Augustus, or Burringurrah to the local Wadjari people, is an asymmetric anticline resting on top of what geologists refer to as “very old” granite. Its composition differs markedly from the underlying rock strata.

Ben Bulben is an example of another isolated monolith, or tor, that can be found on every continent. They all share similar morphology, although they are composed of different minerals. Mount Augustus, for instance, is made up of rocks and pebbles of various sizes cemented together by hard sandstone. In other areas of Australia, such as Bald Rock, the great blocks of stone are actually granitic, resting on top of discontinuous strata that does not match the overall structure of the rock.

The geology of Ben Bulben is quite different, however. It is composed of Darty limestone (which makes up the Darty mountains) and shale, overlying Glencar limestone. Ben Bulben is the headland of the Darty mountains, sloping gradually upward until the flat-topped mesa and steep, regularly carved cliff face stop at the edge of the ocean. The change from Ben Bulben shale to Glencar limestone in the monolith is dramatic – the boundary layer is paper-thin.

In other areas of the world, such as Peña de Bernal in Mexico, or the Rock of Gibraltar in Europe, the single stones appear to be metamorphic, indicating a powerful energy source that drew the material in the mountains together, as well as melting and reforming their mineralogical composition. The Rock of Gibraltar is composed of metamorphosed limestone and chalk. The Strait of Gibraltar, itself, demonstrates some remarkable topography and could mark an area where Earth-grazing electric arcs touched-down and sculpted the region.

Several other smaller monoliths can be found in Europe: the Logan Stone on top of Black Tor in Dartmoor and the King Arthur Stone in Cornwall are two of the most famous. At the summit of Mam Tor is another example of oddly piled stones and columnar formations.

In other spots around the world can be found very large monoliths that are unlike the surrounding geography or geological formations. In Africa, the Brandberg Massif could be a gigantic fulgamite that was molded and upraised by electrical forces. Other examples are Aso Rock in Nigeria and Ben Amera in Mauritania. Both are lone monoliths that appear to have been pulled up and out of the surrounding countryside.