Home Beginner's Guide to the EU Chapter 2 — Why Should I Care?

Chapter 2 — Why Should I Care?

It’s only natural that inquisitive minds seek out things that science may have missed or simply misunderstood. Discovery inspires human imagination. It expands our vision of ourselves and of the world around us. Inquisitive minds, free to explore and encouraged by new possibilities, are those most likely to develop into critical thinkers and innovators. They are the guarantors of tomorrow’s advances in science.

Take away the inspiration of discovery and you diminish the sense of personal connection to the scientific adventure. Among young people today a catastrophic decline of interest in science has already occurred. How did this happen? When science fails to inspire students, how much of the responsibility rests with the teacher, and how much could be due to the loss of scientific vision, or the rise of a sterile dogma, or a cultural failure to see new frontiers for what they are. 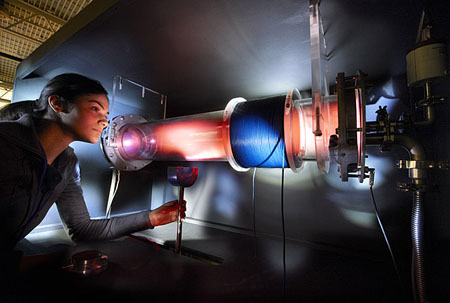 While plasma studies may focus on a single subject such as fusion energy production, the understanding of how the Universe operates also awaits the student with a wider interest. Image credit: DOE-Princeton Plasma Physics Lab; Peter Ginter.  From the Essential Guide to the Electric Universe, Chapter 3.

In contrast to the larger social trend, newcomers to the Electric Universe have responded with enthusiasm, wonder, and astonishment. They discover that the usual picture of the universe, the picture they were taught in school, is far from the “settled science” publicly advertised. This is not an unnerving discovery. It’s the fuel for curiosity and for scientific progress.

The great surprises of the space age then become pointers to new lines of inquiry. Science is no longer fragmented into isolated compartments. Specialists in every field are invited to reconsider theoretical assumptions. A new and more interdisciplinary language of science emerges.

Today, nothing is more important to the future and credibility of science than liberation from the gravity-driven universe of prior theory.  A mistaken supposition has not only prevented intelligent and sincere investigators from seeing what would otherwise be obvious, it has bred indifference to possibilities that could have inspired the sciences for decades.
~David Talbott and Wallace Thornhill, Thunderbolts of the Gods

We’ve been told for decades that, at its core, the Sun is a controlled hydrogen bomb. But today a different view of the Sun is emerging. More than a hundred years of laboratory experiment and a steady stream of space age discoveries support this alternative view. Its proponents say that the electric field of the Sun, though immeasurably weak across a few meters, extends for billions of miles from the Sun: the total charge within the heliosphere could suffice to light the Sun electrically. That is a testable hypothesis. But the tests will require innovators who want to know.

The Electric Universe now touches all of the sciences. In recent years the EU community has grown increasingly aware of the “body electric,” connecting the life sciences to discoveries about electricity in the laboratory and in space. The new picture also throws dramatic light on solar system history, earth history, and the evolution of life on earth. Even the ancient sky, as seen and described by our early ancestors, challenges the commonly told story.

The awakening interest in the Electric Universe begins with the realization that mistaken assumptions can have serious consequences. In the second half of the 20th century, a narrowly-defined “scientific consensus” gave the appearance of settled questions. But how secure was theoretical edifice as a whole?

In truth, the costs of a few core mistakes may be incalculable. How much funding of science and education has been wasted asking the wrong questions? Too often the claims of “settled science” serve only to anchor in place our earlier mistakes. When theoretical speculations then combine with public relations and financial controls, they can only compromise scientific integrity.

The Electric Universe is an invitation to curious people of all ages and all walks of life. It does not answer every question a human being could ask. But whatever your deeper interests, it will help clear the path ahead of you. On the deepest scientific questions it will expose our conditioned layers of thought and perception. That is how we begin to see the accumulating evidence for what it is—nature itself calling us to a sweeping intellectual revolution.

The Electric Universe by Wallace Thornhill and David Talbott — Chapter 1

If you are a scientist you should care a lot—in fact, you should be quite excited—because now is one of those unique times when  a critical mass of people, who realize there has been a lot missing from our scientific explanations, is suddenly reached.
~Bill Gardner, PhD,retired scientist

If you are not a scientist, you might care because the EU studies are giving evidence that we live in a connected universe, a universe of smaller worlds inside of larger worlds, with everything meaningfully connected. We do not live in a universe of dead rocks and empty space.
~Michael Clarage, PhD, SAFIRE Project scientist

EU has brought excitement back into science. Conventional theories are based on so many assumptions and are simply too incredulous – they are far out there. The EU brings it all back to the science of Maxwell’s electrodynamics and plasma. Something we can study in the lab. Engineers use it every day in industry. The EU brings cosmology back into the laboratory and into hands of the common man, like me.
~James Sorensen, EU2014 presenter

Maybe you will be the one who finds the key that unlocks the mysteries of the technology of the Ancients, the story of the human race, the inner world of water, or what makes the Galaxy tick.  Instead of being just another vessel for teachers to pour facts into, the EU invites you to become an active seeker of new knowledge that can benefit the whole world, no matter what your age.
~Forrest Bishop

Care? Aren’t you excited at this opportunity to discover all kinds of new things? Learn how the universe is invisibly powered by electricity everywhere you look? The people that finance science, they should care. Lots of their money is disappearing into black holes.
~Gerard Bik, The Netherlands