Home Picture of the Day Knot So Fast! 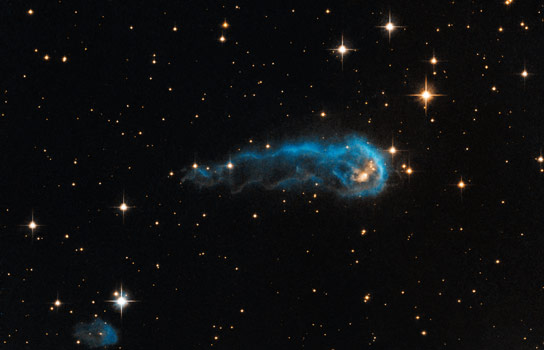 Well-organized phenomena in space cannot be solely based on mechanical action.

A recent press release from the Hubble Space Telescope science team announces a “cosmic caterpillar” in the constellation Cygnus. This knotted structure is said to be caused by “harsh winds from extremely bright stars…” The stellar winds are said to push the matter from the protostar’s accretion disk out along the direction of force, creating a “wind streak” in space.

Preferring to explain energetic emission of ultraviolet light and the expulsion of material jets as “speedboat wakes”, “contrails”, or “smoke” astronomers miss important clues about what is responsible for both manifestations: electricity.

Since wakes, contrails and smoke all tend to spread out and dissipate as they move away from the source, the “tail” streaming back from IRAS 20324+4057 cannot be simply an exercise in kinetic physics. The tail is highly organized along its entire length into what appears to be a helix, indicating that it might be a Birkeland current.

Previous Pictures of the Day discuss several different objects with long tails. From galactic-scale objects such as ESO 137-001 with its 200,000 light-year-long tail, to hot-bright stars, to planets, to comets it seems as if everything exhibits an energetic component that is very difficult, if not impossible, to explain using consensus theories. New observations seemingly require a revision to theory or else an admission of complete bafflement.

Star-forming regions are conventionally associated with high frequency light sources. Gamma rays, X-rays, and extreme ultraviolet shine from “cosmic eggs”, called protoplanetary nebula; resembling the glowing tips of condensed gas balls. One of the most iconic images in modern astrophotography is the famous “Pillars of Creation” in the Eagle Nebula. The tops of the clouds, with their Q-tip structures, X-ray radiation, and compact shapes are also deemed to be stellar nurseries, where standard theories meet colorful pictures.

If, in electrical terms, IRAS 20324+4057 is a Birkeland current, it derives partly from an external field aligned with the cloud axis and partly from a toroidal field produced by electric charge flowing along the cloud axis. The current is strongest at the axis, becoming weaker farther away. If astrophysicists recognized this simple fact, the glowing arms of spiral galaxies, for instance, would at last be seen as electromagnetic structures, subject to electromagnetic forces, similar to those tail-like manifestations mentioned above.

Electric discharges in plasma clouds create double layers, or sheaths, along the current axis. Positive charge builds up on one side and negative charge on the other. An electric field develops between the sides, and if enough current is applied the sheath glows, otherwise it is invisible. Electric currents flow along the sheaths. In plasma, the currents spiral into filaments. The filaments attract each other, but rather than merging they spiral around, gradually pinching down into glowing discharges.

Electric sheaths that are normally invisible are “pumped” with additional energy from galactic Birkeland currents in which they are immersed. The excess input power pushes them into “glow mode”, while increased flux density draws matter from the surrounding space into massive strands of plasma.

A reasonable philosophy of science begins with “I don’t know”, and then proceeds from that platform of ignorance into discovery. NASA scientists say, “we know how the Universe works!” Or, “there is no electricity in space and even if there were, it isn’t doing anything.” Except that the things and events they record with their instruments belie such assertions.