Home Picture of the Day Shaping What Is 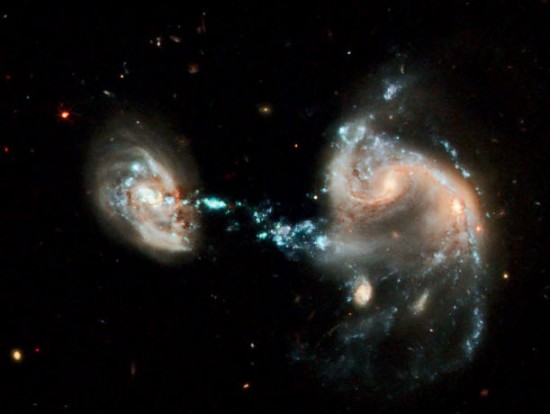 Galaxies are the luminous children of electrical parentage, not the darkling spawn of invisible forces.

“Hear one side and you will be in the dark. Hear both and all will be clear.”

“Galaxies come in many shapes and sizes, but until recently astronomers have been at a loss to explain why. Now scientists have used dark matter theory to predict the menagerie of galaxies found in the Universe.” The mathematical description for dark matter is plugged into computer programs that create models of galaxy formation.

The quantities vary depending on the source, but consensus astronomy assumes that dark matter makes up approximately 25% of the Universe. So-called “dark energy” is said to comprise more than 70%, with the remaining 5% being the baryonic matter that is visible to the naked-eye and detectable with instrumentation.

Astronomers use the term “baryonic” in reference to all celestial objects made of normal atomic matter—that is, matter composed of protons and neutrons. Note that electrons are not baryonic, they are “leptons”, but they are ignored on the astronomical scale because protons are usually accompanied by electrons.

Dark matter is described more by what it is not than by what it is. As stated above, it does not exist as stars or planets that can be seen. It is not dark clouds of normal baryonic matter, because baryonic clouds can be observed when they absorb radiation. Dark matter is not antimatter. Since gamma rays are said to be created when matter and antimatter annihilate each other, dark matter would glow with that high frequency light.

As the press release states, researchers used the “Lambda Cold Dark Matter” theory to write a new supercomputer model that was able to closely approximate the number of spiral and elliptical galaxies that can be observed.

Including dark matter in their calculations was deemed “crucial” because galaxies are thought to be surrounded by “haloes” of dark matter. Such large concentrations of invisible material are essential for galactic clusters to hold together, as well as preventing individual galaxies from “flying apart”.

The confident assertions about the model’s accurate predictions must be balanced against the fact that the equations have been created to match observations. In order to offer “predictions”, many assumptions must be considered literal. However, as has been pointed-out in previous Picture of the Day articles, there are many things the models cannot anticipate: the large scale structure of the Universe, for example.

Popular astronomy envisages dark matter organizing galactic structure. Another mathematical genie, black holes, are also important to the hypothesis, since black holes are said to inhabit the cores of almost every galaxy. Both dark matter and black holes (as well as dark energy) are necessary mathematical constructs in the astronomical community, because in their minds gravity is the sine qua non of all forces that govern galactic motion in the cosmos.

A far different approach is taken by those who consider the Electric Universe theory.

Astrophysicist Hannes Alfvén first proposed his theory of “electric galaxies” in 1981. Galaxies and their motions resemble a homopolar motor more than they do anything else. A homopolar motor operates because electric current creates a magnetic field, which causes a metal disc to spin at a rate directly proportional to the supplied current.

A galactic disc is like the metal disc of a homopolar, or Faraday motor, named for its inventor Michael Faraday. Immense Birkeland currents flow into galactic axes and out along the disc. Stars in the disc are powered by those currents. Galaxies, in turn, receive their power from intergalactic Birkeland currents that are visible in space as filamentary structures traceable by their magnetic fields.

Filaments of electricity can be seen everywhere: static electricity sparks, lightning flashes, “jets” of x-rays that pour from galactic poles, and the “strings” of superclusters that make-up large-scale structures in the Universe. Birkeland currents are drawn toward each other in a linear relationship, with a long-range attraction potential 39 orders of magnitude greater than gravity, so the need for dark matter influences can be dismissed as completely unnecessary.