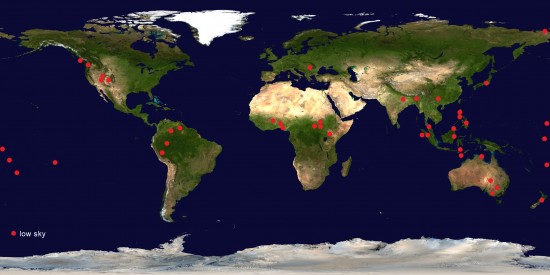 Most researchers address ‘known’ questions, such as ‘what causes ice ages?’, ‘how far is the moon?’ or ‘where did the ancestors of the human species live?’. Comparative mythologists face the double challenge of seeking answers to problems which most people are unfamiliar with in the first place. Greek mythology provides a touchstone for almost anyone’s grasp of mythology as a whole, but is really atypical and unrepresentative in many respects.

A cross-cultural study of so-called ‘creation myths’ identifies hundreds of ‘archetypes’, often bewildering, which have not even been acknowledged, let alone explained. Among the most widespread of these is the curious motif of the ‘low sky’ – an intellectual puzzle hardly anyone has even heard of.

That the ‘sky’ used to rest much lower above the earth than it does today, inconveniencing people, is a refrain encountered in spades, in almost every creation myth. Whereas the Greek myth of Ouranos’ former penetration of Gaia at best preserved a vestige, hardly any cultures suppressed the idea. The following random selection of examples barely scratches the surface, but gives a flavour of the material, stopping just short of nausea:

The Khasi (Meghalaya, northeast India) related: “In olden days, when the earth was very young, they say that heaven and earth were very near to one another …” As for “the origin of the sky”, the Mantra, a Jakun group (Malay Peninsula), “believe that at first it was very low and close to the earth, so much so that Blo, one of the first men, bumped against it”. The Ngaju Dayak (east Kalimantan) believed that ‘The sky was … in the beginning close above the earth; it consists of an edible, oily substance and served the people for food.’ On Sumatra, the Batak stated: “Formerly heaven was nearer the earth …” The Manóbo (Mindanao), as well as people in northern Luzon, both in the Philippines, sustained “the belief that the sky was once very near the earth …” The Tagálog (originally southern Luzon) stated:

“In former times the sky was very low and could be touched with the hand; when men were playing, they would strike their heads against it whenever they jumped upward.”

The natives of Tahiti concurred that “at first the heavens joined the earth …” On Tuamotu, the narrative of creation began with a time when “mankind … was confined in narrow spaces” and “when the sky hung low over earth and sea”. On Manihiki (Northern Cook Islands), “The heavens and the earth were supposed to have been at one time united.” Members of the Mandalbingu group (northern Arnhem Land, Australia) reported that “long, long ago, the sky was so close to the earth”. The Wotjobaluk (central-western Victoria, Australia) “account for the space between the earth and the sky by saying that at one time they touched each other, that is to say, the sky lay on the earth”. Again, a tribe of the Wiradjuri from the headwaters of the Murrumbidgee River (central New South Wales, Australia) held that …

Similarly, in Benin it “is said that in early times the sky was quite close, only about two meters from the earth …” The Nuba (southern Sudan) agreed that “in the beginning the sky was low down and close to the earth, in fact it was so near that man could touch it.” The Yagua (northeastern Perú) contended:

‘Before the birth of the sun, the sky was low, low, almost caressing the earth. The worlds almost touched each other. It was, therefore, very easy to pass from one cosmic zone to another.’

Members of the Sikuani nation (the Orinoco river basin, Colombia) recalled a time when “the sky was rather low”, “the firmament was low”, “the sky still hung low”, and “the sky was not as it is now”, for “previously it had been very low”. The Nuu-chah-nulth (west coast of Vancouver Island, British Columbia) recalled the time when ‘the sky was still near the earth’. And the Hopi of Oraibi (Navajo County, Arizona) claimed that, at the beginning of creation, “the people … found the firmament, the ceiling of this world, low down upon the earth – the floor of this world.”

The excessively low height specified in many of these accounts is striking, bordering on the absurd. Yet the theme is solidly embedded in a web of internally consistent ideas. The concept of the proximate sky as a low-hanging ‘ceiling’ morphs into another staple of traditional cosmologies – the notion that the sky used to be a solid ‘firmament’. As the natives of Kiribati (Micronesia) had it:

“… heaven … was like hard rock that stuck to the earth. And heaven and earth were called the Darkness and the Cleaving Together. … the heavens were not yet high … In the beginning Heaven and Earth clove together. … Heaven was a rock lying over Earth and rooted in the deep places of the Sea.”

The transition of this to the present condition is related in the ubiquitous tales of the ‘lifting of the sky’ or the ‘separation of sky and earth’, often by means of the axis mundi or world axis.

The phenomenology of the polar aurora may help to build a new hypothesis from the ground up. Lay observers have often likened contemporary aurorae to domes, tents, canopies, ceilings or floors, suggestive of a lowered ‘sky’. For example, a Herbert Choate of Drexel, Nebraska, reported as follows on the great aurora of 14 May 1921:

“At 11 p. m. the heavens appeared like the roof of an immense gold-lined cave with stalactites (curtains) of light extending toward the earth. Streamers of delicately tinted light shot up from every part of the horizon. One Omaha newspaper likened the aurora to ‘a great tent of light that completely covered the city’.”

At Springfield, Illinois, the same aurora was described as “a huge dome or canopy over the earth”. And an “unmarried shaman” from Ikogmut (lower Yukon, Alaska) experienced a cosmological vision in which he was not taken up into the sky, as one would expect, but the “sky” came down towards him – in what was doubtless an auroral display:

“As night came on he fell asleep, and as he slept he saw the air filled with falling stars, and then that the sky was sinking toward him until finally it rested upon the hilltop so close that he had barely enough room to move about below it.”

Of course, such incidental reports cannot do justice to the mythology proper of the ‘low sky’, which referred to a prolonged condition prevailing during a distinct ‘age of myth’. Even so, they do provide an important pointer to a promising solution. As a low-down, geomagnetic reversals and excursions are events during which the earth’s magnetic dipole field collapses and the magnetosphere contracts; whether the one causes the other or vice versa is a chicken-and-egg problem. At any rate, the magnetopause is compressed onto the ionosphere, driving the aurora down to lower altitudes. Because the enfeebled magnetosphere is less efficient in deflecting in-flowing particles from the solar wind from the earth’s atmosphere, the intensity of auroral activity increases. And as the magnetic poles drift towards the equator and minor dip poles gain strength, the outcome is a dramatically enhanced, low-altitude aurora manifesting on a global scale – lasting perhaps as long as the geomagnetic disturbance. Presumably, the eventual recovery of the magnetosphere and the dipole field would give the impression of a ‘heaving heaven’, just as creation myths worldwide attest to.

Extracting historical information from myth is a touchy undertaking, but with such consistent testimony as outlined above it is simply incumbent on unbiased scholars to investigate the nexus of folk ideas concerning the former adjacency of the sky to the earth. Geomagnetic excursions are known to have happened within the past 15,000 years and seem to provide a down-to-earth solution to the enigma of the oppressive sky.