Home Picture of the Day Iapetus 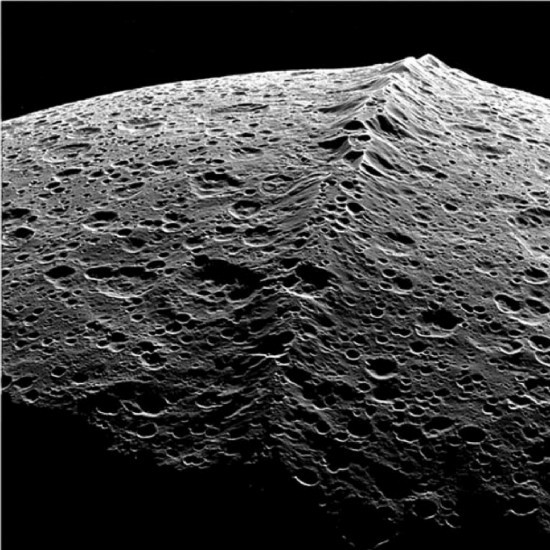 The closest images of Iapetus ever taken came from the Cassini spacecraft as it flew to within 5000 kilometers of its target, resolving features as small as ten meters. In a previous Picture of the Day article about this enigmatic moon, the resemblance to some earthly formations was noted. Specifically, the physical appearance of Moqui Marbles found in the deserts of Utah. The striking similarity can be seen in the equatorial ridges that are visible on both – stone balls as big as small eggs and a moon hundreds of kilometers in diameter.

Some places on Iapetus are coated with what appears to be frost, covering many kilometers. The material has not been identified as actual water ice, but that has been postulated as the most likely candidate. Scattered over the white background are dark splotches similar to those discovered on Hyperion and perhaps arising from the same source: Saturn’s moon Phoebe, the blackest object in the solar system.

In the close up views of Iapetus, more features have been identified that mark it as an anomaly in conventional circles. The surface is smooth as if it is composed of solidified bedrock with no breccias and little in the way of dust or pebbles. However, the abundant craters of every size are a sign that there has been some kind of activity violent enough to resurface the entire moon. The shape of the craters as they rise up with the terrain is also distinctive.

In a standard Newtonian impact scenario, craters should form as conical holes with a blanket of blast debris surrounding the rims, sorted from largest to smallest particles depending on distance from the explosion. On Iapetus, there is a decidedly different landscape. The craters are clean and most are found in collections, as if a shotgun blast struck the area. In locations where the topography has been tilted, such as near the gigantic mountains called the Himalayas of Iapetus, the craters are stretched and pulled as if they have been partially melted and then immediately reformed. They have flat bottoms and perpendicular walls, indications that they were cut into Iapetus by electric discharge machining (EDM) and not blasted out of it. Another distinctive indicator of EDM on the surface is the bright crater rims and the smaller craters surrounding the larger ones.

As Cassini continues its exploration of Saturn and its many offspring, more discoveries and more evidence for the electrical scarring of planets and moons will be presented.