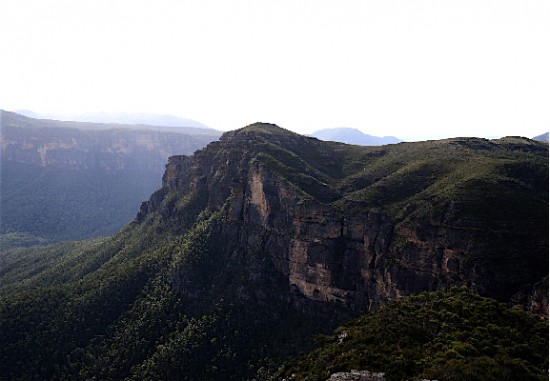 When we look at the geology of our planet and how it is shaped, there are assumptions that govern our interpretation of the landscape that surrounds us.

We have been told and taught that the only choices are wind, rain, and tectonic forces. We accept this a fact because that is what knowledgeable books and people say, so when we look at the landscapes around us, our rose colored glasses make sure everything conforms to those preconceptions.

The primary assumption is that everything takes millions of years to accomplish. But how does one distinguish between 6 million years and 7.5 million years?

Have a look at the picture. We are told that this gorge which sits in a sandstone plateau about 1000 metres above sea level was carved by the action of water over millions of years. The vast majority of us just accept the fact and go on with our daily lives.

But if we actually stop and consider what we’re looking at, then we have to ask some serious questions about what we have been taught and what has really happened.

This valley has a 3 way intersection. Now that is unusual in itself; but each arm of the valley is identical in shape. Then we have the problem that the water had to come from somewhere to actually carve the valley and that it had to flow somewhere. Water supposedly flowed over the plateau, and then carved a 3 way straight-sided valley, cutting away 30% of a mountain in the process.

How can water carve a 3 way intersection and leave straight sides in the middle of a plateau? Upstream from this picture the Grose valley just ends. Water carving rock? Water just follows what is already there.

In the picture you can see that whatever carved the valley cut through the existing terrain, leaving the original plateau intact. But that conical hill really does not fit in with a sandstone plateau that was once supposed to be under the sea as current theory dictates.

The other geological feature are the numerous fulgurites that protrude out of many of the sandstone outcrops in the area. Again we are told that sandstone has layers of ironstone that are formed by the leaching of chemicals from the sandstone. But it really does not explain tubular ironstone formations…

In the background is Mount Banks, with 30% missing. Whatever carved the valley cut thru Mount Banks like hot butter. We are also told Mount Banks is a volcano, but no crater or lava is present. Also if we assume that water caused this, then water would undermine the cliff and it would collapse. That would assume that there should be large boulders lying on the valley floor. There is nothing… Of course the other problem is that all the sediment from this unusual valley had to flow somewhere. Downstream from this intersection the valley narrows considerably so the sediment did not flow that way.

There is a 3 way valley with each arm of the valley exhibiting nearly identical features; and on each arm sits a mountain, Mt. Banks, Mt. Hay, and Lockleys Pylon.

This valley is close to Wollangambie crater: a crater in a conical hill that sits inside another crater. If whatever process that formed it took millions of years, why are there legends from the local aborigines of their God carving out the features in the not too distance past?

So let us take another assumption. Not millions of years to create but in a short period of time. Not water or wind but plasma discharges on a scale that we have never seen but are reproducible in the lab and scaleable.

Looking closely at this 3 way intersection, it is a plasma discharge starting to rotate but never finished. If it had completed its rotation you would have a crater. Each of the mountains mentions before are plasma blisters, nothing more. From Google Earth you can see that these blisters look as though they have been molten.

Our interpretations of the landscape, history and just about everything else is colored by people who put together theories based on little facts. These theories become so calcified that they themselves become facts. That is the danger of theories. To be able to look at the world around us and not be clouded by theories that have to be continually modified to fit the observed facts—that is what science should be.