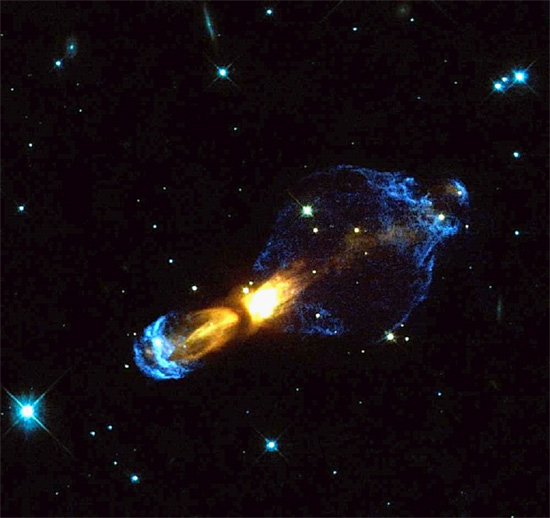 The Universe behaves according to the laws of plasma dynamics.

In every science journal discussing the behavior of planetary nebulae, the prevailing opinion usually involves gases and dust “blowing” through them, as well as “winds” created by “shock waves” from exploding stars. In many cases, the nebula is described as “star forming,” because intense X-ray radiation, or extreme ultraviolet light, are thought to indicate that nuclear fusion reactions are occurring within the cloud.

In an electric Universe, plasma, not hot gas, flows through space. The physics of electricity applies, not the physics of wind. Within the shell of a planetary nebula are one or more plasma sheaths, or “double layers,” that act like capacitors, alternately storing and releasing electrical energy. The current flow alternately increases and decreases within the sheaths inside and outside the shell.

An electric discharge in a plasma cloud creates a double layer along its axis. Positive charge builds up on one side and negative charge on the other. A strong e-field exists between the sides and if enough current is applied the double layer glows, otherwise it is invisible and is described as “dark mode”.

Double layers and current filaments also respond to the interstellar electric currents in the circuit that threads through the galaxy. They are mostly dark mode phenomena because of their low current density, but the magnetic fields they produce are apparent and detectable in the z-pinch (Bennett pinch) zones that arise.

A neon lamp that emits light only at the excitation frequency of a specific gas is a more correct model for nebulae. Electricity passing through neon gas causes it to form a plasma and to glow a pale yellow. Other gases, such as oxygen or hydrogen, produce blue and red light, while heavier elements emit their own colors.

“It’s been over 300 years since Newton encountered his apple, and his conception of gravity, now modified by Einstein and supplemented with similar mechanical theories of solids, liquids and gasses, has become the popular vision of space—an almost-empty universe of self-contained bodies. And now it’s been 100 years since Birkeland encountered his aurora, and his conception of electric currents in space, developed by such pioneers as Irving Langmuir and Hannes Alfven, has been a footnote to standard theory, rarely called upon except to explain the occasional curiosity in space.”

It’s about time that the simple more straightforward explanations are remembered and not the arcane, overly complex hyperbole that seems to be the standard for scientific papers today.