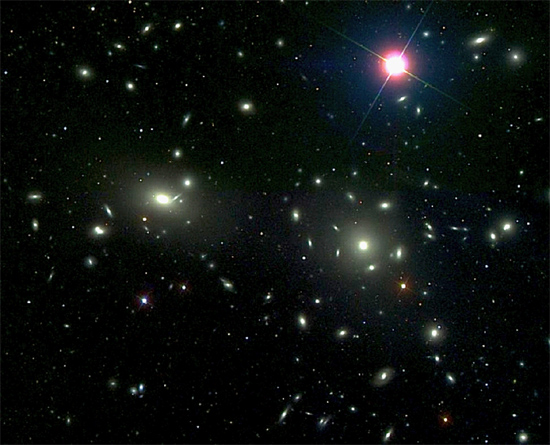 According to redshift calculations, the Coma Cluster is a sphere of galaxies 3.5 million light years in diameter over 300 million light years from Earth. The cluster is one of the most compact mass accumulations in the observable Universe with more than 1000 galaxies grouped together inside a haze of gas and dust that has been measured at a temperature of 100 million Kelvin. Astronomers continue to puzzle over the intense X-rays blaring out from Coma’s central region, a finding that has, thus far, eluded theoretical explanation.

Scientists analyzing data from the Subaru Telescope discovered a “threadlike structure” emerging from RB199, one of the larger elliptical galaxies inhabiting the cluster. The filament extends approximately 260,000 light years from RB199 and contains groups of stars in close association that are enclosed by glowing, ionized shells. Researchers refer to these rapidly moving star cluster knots as “fireballs,” because they look like flaming projectiles shooting out from the galaxy.

What caused the compact clumps of stars to form? One proposal is that gravitational “tidal forces” pulled stars and gas out from RB199 as another galaxy passed close by. Another suggestion is based on the movement of the galaxy toward the center of the Coma Cluster. As it accelerates into the central mass of the cluster, the blow-back force is thought to push the formations out and away from the direction of travel like a cosmic comet tail. However, neither conjecture is able to accommodate the characteristics of the stars and the knotted gas whose temperature exceeds tens of million Kelvin.

The Subaru team’s conclusion is that RB199 is being affected by “ram pressure” as it “crashes into the center” of the galaxy cluster. It is friction from the Coma Cluster’s hot gases interacting with the galaxy moving at almost 2000 kilometers per second that forms the long filaments. Gas and dust scraping against each other strip material off RB199 and create the superheated stellar fireballs.

Dr. Michitoshi Yoshida, the Subaru team’s lead investigator said: “The team is confident that our study of these phenomena leads to a better understanding of the gas stripping processes in galaxy clusters, and the effect of clusters on the evolution of individual galaxies.”

Irony aside, wind socks, shock waves and collisions are often used to describe phenomena that create high-frequency electromagnetic radiation in the cosmos. Since the beginning of advanced astronomy, conventional theorists have relied on gravity and acceleration for the production of gamma rays, X-rays and extreme ultraviolet light in space. Hydrogen gas compression is supposed to create enough transfer of momentum that it reaches temperatures greater than the cores of some stars. In other words, it is the high temperature of the gas that makes it glow so brightly.

In previous Picture of the Day articles, it was noted that many structures in the Universe are active energy sources—some galaxies eject charged matter out from their poles, or leave long braided tails extending for thousands of light-years. Smaller formations (stars and planetary nebulae) have hourglass shapes composed of tightly bunched filaments. Such filamentary structures are known as Birkeland currents.

Plasma cosmologists have long known that the filaments extending from active “radio” galaxies to the “radio lobes” far above their poles are the signature of Birkeland currents. Almost every body in the Universe displays some kind of filamentation. Venus, for example, has a tail composed of what NASA scientists call “stringy things.” Comet tails are composed of “stringy” ion tails. The glow from planetary nebulae resolve into intricate webs. The jets of Herbig-Haro stars and energetic galaxies are often resolved into braided filaments, and the spiral arms of some galaxies look “hairy” with threads of material extending from them.

All those filaments are Birkeland currents, but they only represent the visible portion of an entire circuit. The rest of the circuit may generate magnetic fields that can be mapped, so the map will indicate the extent of the circuit. Every element in a galactic circuit radiates energy, and it must be powered by its coupling with larger circuits. The extent of those larger circuits is indicated by the observation that galaxies occur in strings.

It seems apparent that the filamentary knots exploding outward from RB199 are another example of electricity in space forming glowing “fireballs” of plasma in the electromagnetic pinch zones of cosmic currents.