Home Picture of the Day Daughter of Uranus 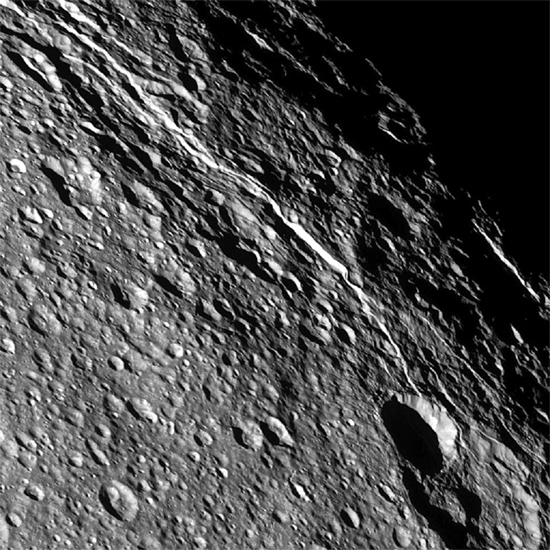 Craters cover the entire surface of this moon.

Rhea is another of Saturn’s moons that bears examination in light of electrical theories. Rhea’s mean diameter is 1528 kilometers, so it is medium-sized in Saturn’s family of moons. Even though it is small, the entire visible surface of Rhea is covered in craters. One large “impact basin” is 360 kilometers across, which probably makes it the most cataclysmic event in the moon’s history, considering anything larger would have blasted it to rubble.

One of the most interesting features of Rhea is the large, bright splotch that covers almost one entire hemisphere. Because it resembles the rayed structures found on Earth’s moon, scientists have attributed its formation to an asteroid explosively hurling subsurface debris outward in long ejecta blankets. As previous Picture of the Day articles have noted, however, rayed formations are more likely to be the result of electric arcs and not impacts. The bright rays on Rhea appear to have been created in the same way.

The rays surround a large central crater and not deep, but look more like a thin layer of dust without the gradual sizing of the granules as they recede from the point of impact. They were probably deposited by an “electric wind” as a plasma arc reduced the moon’s surface regolith to fine powder and then floated it away as ionized particles.

Cassini’s initial flyby in 2004 discovered two craters with unusual formations in their centers. Nearly all craters on Rhea occur in multiples, the majority of the larger ones are in pairs with many smaller craters distributed around them non-randomly. A surprising aspect to their arrangement is that they are found on the rims of the large craters, corresponding to what happens in electric discharge machining (EDM) when a spark will “stick” to one spot for a split second, carving small craters as the main discharge rotates within the large one. The two peaks in the centers of the craters are another example of EDM. The impact of a space rock could never create such a formation.

Another eye catching feature on Rhea is an oval-shaped crater approximately 115 kilometers on its long axis. The conventional explanation is that it was formed when a meteor, at some remote time billions of years ago, struck the moon and scooped out the crater along its direction of travel. If that explanation is accurate, then where is the gouge that should be at the bottom? Why is the leading rim not built up from the movement of rock and ice as the meteor exploded through it at a shallow angle? Why is the crater – and all the craters surrounding it – flat, with sharp, perpendicular walls? If the craters were made by meteor impacts, they should be rounded and have raised rims.

These are only a few out of many such huge structures that indicate Rhea did not undergo a slow, steady formation out of a nebular cloud, but was probably torn and pounded by rapidly evolving conditions that hammered its surface. What has been left behind is the record of those conditions in the form of fractures, chaotic terrain and gigantic caldera as big as the state of Oregon, but with no debris.

Despite what appears to be explosions large enough to rock the planet, there are no fragments – no big boulders or blocks of stone that must have come out of the big holes. If the craters and rilles were formed in giant electric arcs, then the rock and ice was probably vaporized or turned into tiny grains and thrown into space.