Home Picture of the Day Red All Over 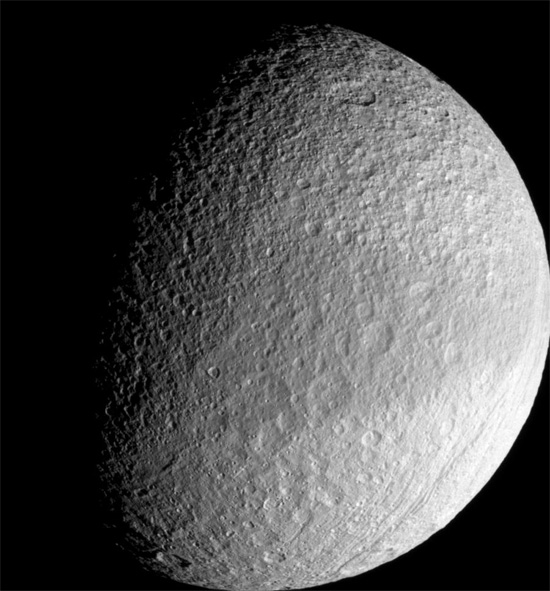 Some of Saturn’s moons are slightly red in color, as are other bodies in the Solar System.

“Mars the red planet” is a familiar phrase. The planet exhibits a faint yellowish-red color when seen with the naked eye, and its rusty surface hue is visible through the lenses of robotic rovers traveling across its landscape.

Iapetus, one of Saturn’s more enigmatic moons, is notable for a reddish-black deposit covering one hemisphere. Hyperion’s heavily cratered surface is also dusted with what appears to be the same “soot” that covers Iapetus. The material piles into drifts inside some of Hyperion’s deeper craters.

Maps of Mimas, Enceladus, Rhea, Dione, and Tethys show that all of them are also red to some degree.

All the new maps indicate that, except for Mimas, they are all redder on their trailing hemispheres and tend to be more intense in the center of the disk. Although the leading face of the moons is also red, it is not as strong

Scientists from the Lunar and Planetary Institute in Houston admit that the pattern on both hemispheres is “difficult to explain” because only one hemisphere or the other would normally be affected. Bombardment by a train of meteors, or particles from Saturn’s rings, should accumulate on the leading hemispheres.

However, it is most likely a plasma, in the form of high energy ions that is flowing into the moons from their supercharged electrical parent that is contributing to the coloration. Electrical theorists argue that Saturn moves within the plasmasphere of the Sun and interacts with the Sun’s electric field. Since planets and moons in the Solar System are charged bodies that are not isolated in space, it is to be expected that they transact electrically with each other.

In the image at the top of the page, a dark equatorial stripe is faintly visible across the leading face of Tethys. The stripe is bright at ultraviolet wavelengths, but dark in the infrared. Mimas shares a similar feature, a dark band stretching more than halfway around its circumference.

The moons emit ionic plumes because of their position in Saturn’s circuit. The ring formation around Rhea is probably the remains of pulverized rock and ice that billions of watts of electricity created when they catastrophically passed through the moon’s conductive strata at some time in the past. More than one quarter of Phoebe’s mass has been removed and has been distributed throughout the Saturnian system. The reddish-black soot covering the other inner moons of Saturn most likely came from Phoebe.

Similar discharge phenomena can be seen on Jupiter’s moon Europa, including the red color of the material. Close-up images reveal narrow darker deposits that trace the path of subsurface electric discharges. It is those discharges that altered Europa’s surface composition, transforming the water ice into other materials. Some of the altered material created the coloration.

Europa’s red color is due to oxygen atoms from water ice forming a sulfur atom. On Mars, the volume of sulfur in the environment is high, contributing to its ruddy complexion, but the oxides of iron that abound there appear to be the primary influence.

Recently, observations of the dwarf planet Haumea’s reflected brightness revealed the presence of a dark spot on the dimmer side. The spot also has a reddish tint that could be due to a concentration of compounds that reflect red light.Haumea revolves around the Sun in an orbital path out past Neptune and into the farthest reach of Pluto’s orbit. A previous Picture of the Day considered other remote objects called Centaurs. Along with Mars and the moons under discussion, they are also colorful. Some are green and some are blue, but the primary color is a brick or rust-red.

The Electric Universe suggests a reason for the different colored planets and moons, as well as for the different chemical compositions. Stars are formed when cosmic Birkeland currents twist around one another, creating z-pinch regions that compress plasma. Laboratory experiments have shown that such compression zones are likely candidates for star formation.

Stars that are under extreme electrical stress may will split into two or more daughter stars, thereby reducing each one’s electrical potential. Further activity may result in the ejection of stars with too little electrical energy to glow, so the resulting objects will be gas giant planets in dark mode. Gas giants, in turn, will eject rocky objects from their plasma cores if there is a disequilibrium.

All of the daughter objects in orbit about their parents are connected to them in vast electric circuits. Those circuits were once energized to an awesome extent and carried material from one to another along cosmic electrical transmission lines called Birkeland currents. The charged nuclei of ionized iron, oxygen, sulfur flowed along those currents between the celestial bodies in an exchange of elements.