Home Picture of the Day Down the Hatch 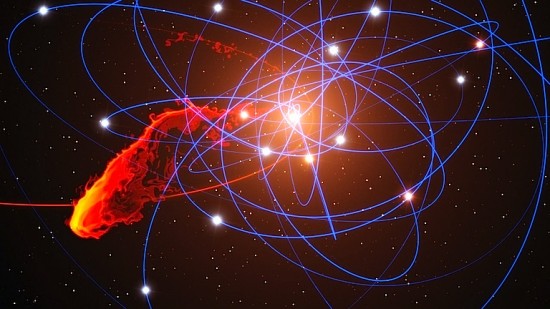 A cloud of interstellar gas and dust will soon be annihilated by a black hole in the center of our galaxy, astronomers say.

According to a recent press release: “This is the first time ever that the approach of such a doomed cloud to a supermassive black hole has been observed and it is expected to break up completely during 2013.”

Black holes continue to elude detection by the most powerful telescopes and radiation sensors, but the consensus community insists that they exist because they can be inferred by their effect on matter and energy. It is assumed that matter falling into the intense gravity well of a black hole is accelerated and subsequently compressed until it is ultimately destroyed inside the so-called “event horizon.”

Sagittarius A* is thought to be a supermassive black hole (SMBH) residing in the center of the Milky Way, approximately 26,000 light-years from Earth in the constellation Sagittarius. It is speculated that more than 95% of all galaxies harbor one or more SMBHs because the spectra from gas and dust in their centers exhibit similar characteristics.

As standard theory suggests, the radiation signature from Sagittarius A* comes from gas ejected by nearby stars. That material orbits the black hole at a faster and faster rate, while it gradually spins closer to a point with four million times the mass of the Sun. X-rays and ultraviolet light are interpreted by astronomers as gas heating up from molecular collisions in the rotating disc.

Since the effect of electric charge flowing through plasma in space is ignored, gravitational attraction close to the black hole is the only way to prevent anything from escaping unless it were moving at half the speed of light. The giant gas cloud should become stretched out, with some absorbed by the black hole and some ejected back into space by centrifugal force.

Black holes are theorized to twist space and time so that velocity calculations yield impossible solutions. Matter inside of a black hole occupies no volume at all, yet retains gravitational acceleration so great that not even light can escape its attraction—they are “black” because they cannot be detected with optical telescopes.

However, heat generated by molecular collisions is supposed to cause gas and dust to glow in X-rays. As conventional theories point out, gamma rays also explosively burst out when matter eventually falls into the black hole.

X-rays and gamma rays in space are not created in gravity fields. Laboratory experiments most easily produce them by accelerating charged particles through an electric field. No gigantic masses compressed into tiny volumes are necessary, and they are easily generated with the proper experimental models. There are other factors that should be considered when analyzing data from space before resorting to super-dense objects and antimatter explosions as their cause.

There is no experimental evidence that matter can be compressed to “infinite density.” Compression zones (z-pinches) in the plasma filaments form plasmoids that become the stars and galaxies. Electricity is responsible for the birth of stars, and when the current density gets too high the double layers in the circuit catastrophically release their excess energy and appear as gamma ray bursts or X-rays or flares of ultraviolet light.

Infrared and X-ray telescopes have confirmed the existence of a plasma-focus plasmoid at the core of the Milky Way. This high-energy electrical formation is the heart of the galactic circuit. Since dust blocks visible light, viewing the core has not been possible until the advent of telescopes that can “see” infrared and X-ray light, which can penetrate dust. X-rays from the plasmoid are typical of that given off by highly excited stars, indicating extreme electrical stress. The strong electrical field in the plasmoid acts as a particle accelerator.

Electrons accelerated to high speeds will spiral in a magnetic field and give off X-rays. In a galactic circuit, electrical power flows inward along the spiral arms, lighting the stars as it goes, and is concentrated and stored in the central plasmoid. When the plasmoid reaches a threshold density, it discharges, usually along the galaxy’s spin axis. This process can be replicated in a laboratory with the plasma focus device.

The discharge forms a jet of neutrons, heavy ions, and electrons. Neutrons decay to form concentrations of matter that appear as quasars. Electromagnetic forces confine the jet to thin filaments that remain coherent for thousands of light-years. The jet usually ends in double layers that extend for many times the size of the galaxy. Those double layers or “lobes” radiate copiously in radio frequencies. The diffuse currents then flow toward the galaxy’s equatorial plane and spiral back toward the core.

In the electric star hypothesis, no concentrated gravity from hypothetical super-compacted objects and “singularities” is necessary. An understanding of electromagnetism is more than able to explain the phenomena we see, without recourse to the supernatural physics of black holes.

Expulsion disks are common in such energetic systems rather than “accretion” disks. Plasma discharge events are commonly known to generate high-energy ultraviolet light. The greater the electric current, the higher the frequency of light will be emitted. With enough power, X-rays and gamma rays are generated.