Home Picture of the Day Let it Rain 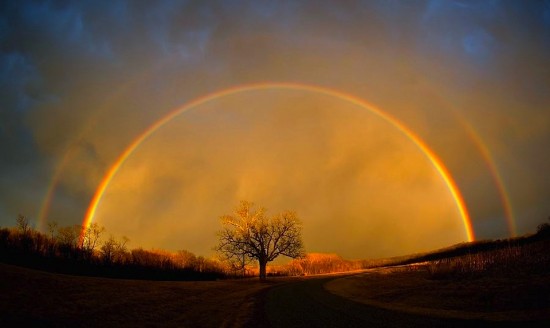 According to a recent press release, ten years of data analysis has revealed that cloud height changes over time in response to an electric field generated by “global thunderstorms”. Although Earth’s electric field is brought into the discussion, and the electric charge on small water droplets is mentioned, researchers admit to mysterious forces at play.

It is commonly believed that weather on Earth is driven by the Sun’s thermal influence on the atmosphere. As we rotate beneath our primary, gases and dust absorb solar radiation at varying rates and in varying degrees.

When any particular region heats up, the air expands and loses density, creating a relative low pressure area. Cooler air, being denser, will naturally flow into the bottom of the warm, low pressure region, causing an upwardly rotating convection cell to form. Most weather systems on Earth are thought to be based on that simple kinetic explanation: winds blow when the cooler, denser air flows into the warmer, buoyant air.

However, ions attract water in the atmosphere instead of through the commonly described process of neutral dust motes building up raindrops due to condensation. The dust hanging in the air becomes charged, making it more attractive to water vapor.

Electricity from the Sun speeds along massive Birkeland currents forming a circuit connecting the Sun with our planet. Since Earth is immersed in the Sun’s circuit, it has a vertical clear-air electric field of 50 – 200 volts per meter.

Water molecules in the atmosphere are tiny electric dipoles and are attracted to other water molecules, so they clump together and align within Earth’s “fair weather field.” The resulting polarized water droplets are subject to a levitating electric field between the ionosphere and the ground. The cloud height naturally changes in response to variations in the atmospheric electric field. Global thunderstorms are not the cause of that field, they are an effect: clouds short-circuit the atmospheric insulator over a height of many kilometers. The vertical winds in thunderstorms are principally electrically driven.

It was in September of 2006 that a major premise of Electric Universe theory was confirmed: Earth weather is electrically connected to the ionosphere. Since electricity always flows in a circuit, if the ionosphere connects to Earth’s magnetosphere then it connects to the circuits of the Solar System, as well.

The ionosphere is connected to the Sun by twisting filaments of electric current, so the lower levels of the atmosphere must also experience the Sun’s influence because of the additional circuit node that connects them with the ionosphere. Could these electric circuits linking the atmosphere with the Sun have anything to do with Earth’s climate in either the short or long term?

This leads to the more general idea that all weather may be influenced by the electrical connection between Earth and solar plasma. The larger view has only recently been considered, so experiments designed to verify the effect that charged particles have on Earth’s weather are now being conducted. It appears that they are having some success.

“If conventional theory fails to explain electrical storms it cannot be used to discount the results of ionization experiments. Instead, conventional theory suffers doubts about its basic plausibility. Weather experts have a limited view of the electrical nature of the Earth and its environment. The ‘enormous power input’ is freely available from the galaxy. That galactic electrical power drives the weather systems on all of the planets and even the Sun.”