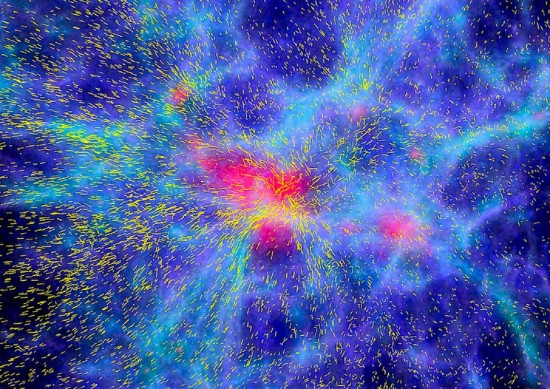 Computer simulation showing galaxies around a massive supercluster of galaxies as it forms.
Credit: Klaus Dolag and the VVDS team.

Dark matter theory makes the news every once in awhile. Although cold dark matter (CDM) gets its name from the idea that it cannot be detected with any known instruments, cosmologists persist in using it to prop up their other ideas about how far away things are, how old they are, and what they are made of. This is done in order to save the prevailing gravitational theory of the Universe.

Since CDM does not emit electromagnetic radiation in any bandwidth from radio to gamma rays, the only possible way to confirm its existence is by using the gravitational theory of the Universe to look for its gravitational effects on so-called “luminous matter.” As was noted in a past Picture of the Day article, galactic rotation is considered anomalous by conventional astronomers, unless CDM is added to a galaxy’s gravitational mass.

In the recent press release, CDM theory is under scrutiny because some dwarf galaxies don’t conform to the generally accepted way that galaxies evolve. In the past, it was thought that they were primarily composed of CDM, and computer simulations indicated that many of them should form in a large halo around the Milky Way, for instance. However, sky surveys have confirmed that there are far too few dwarf galaxies and they are too large.