Home Picture of the Day The Filamentary Firmament 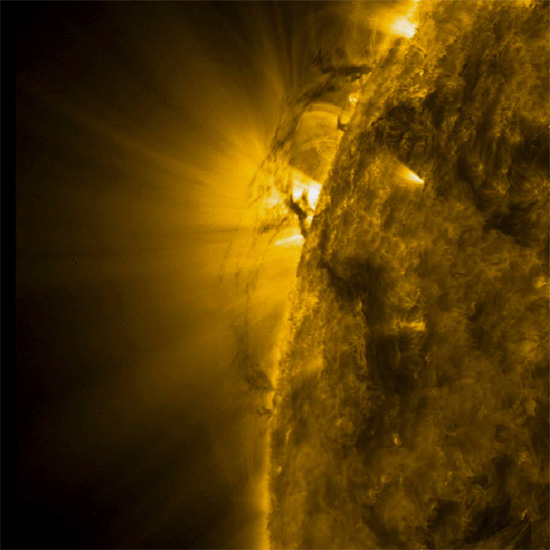 Strands of magnetically confined plasma can be seen throughout the cosmos.

A rotating vortex of solar plasma was the topic of a recent press release. Does that phenomenon relate to other energetic vortices? Previous Picture of the Day articles describe many cases of ionized clouds in space that are inexplicable if conventional theories are consulted. How do both incidents relate to one another and to others?

In an Electric Universe, every body in the Solar System, along with every star and galaxy, is charged with electricity and exists within a plasma environment. Spacecraft sent to other planets, as well as satellites orbiting Earth, see aurorae, lightning bolts, tornadoes, and jets of material. Volcanoes on Earth “spit lightning” out of their craters. Dust storms on Mars are fed by gigantic funnels that rise for thousands of meters. Comets, Saturn’s rings, fountains of charged particles erupting from Jupiter’s moon Io, and many other examples of electrical activity are found farther out in our local neighborhood.

When plasma moves through a dusty gas, it ionizes the material, initiating an electric current. More than a century ago, Michael Faraday proved that when electricity flows through any substance a magnetic field will form. One aspect of magnetic fields in plasma is that they will generate “plasma ropes”: the field surrounds plasma, confining it into coherent strands known as Birkeland currents.

There is an immense barrage of ions blasting out of the Sun that does not dissipate because of those filamentary structures. The Sun’s electric charge flows through the Solar System in Birkeland currents that stretch out for billions of kilometers.

The Electric Star theory postulates that electric discharges in plasma clouds create double layers along their current axes. An electric field develops between areas of opposite charge. Electric charge flows along the sheaths and if enough current is applied the sheath glows. The currents spiral into filaments that attract each other, but rather than merging they twist around, gradually pinching down into arc mode discharges. It is in this way that stars are born.

Galactic evolution might also be the result of large-scale plasma discharges that form wheels of coherent filaments. Why stars in galaxies tend to form long arcs is a puzzle that conventional astrophysicists have yet to address. No gravity-only hypothesis can adequately resolve the issue of star formation, and the configuration of barred spirals and elliptical whirlpools that congregate in million-light-year clusters continues to elude conventional explanations.

As Electric Sky author Donald Scott wrote: “In a laboratory plasma, of course, things happen much more quickly than on, say, galaxy scales, but the phenomena are identical—they obey the same laws of physics. In other words we can make accurate models of cosmic scale plasma behavior in the lab, and generate effects that mimic those observed in space.”

Electric filaments expand through space. Sometimes they explode, releasing plasma accelerated almost to the speed of light. Galactic jets erupt from the opposite poles of some galaxies, terminating in energetic clouds that emit X-rays, gamma rays, radio waves, and extreme ultraviolet light. Such phenomena are best described using plasma science and not kinetics. Astrophysicists see magnetic fields in galaxies and galactic clusters but not the underlying electricity, so they are unable to explain them.

Astronomers maintain that galaxies are clouds of hydrogen gas and intergalactic dust that were assembled by gravity until they coalesced into swarms of glowing thermonuclear fires. The Electric Universe theory is opposed to the idea of galaxies condensed from cold, inert hydrogen.

Hannes Alfvén said that galaxies are much like one of Michael Faraday’s inventions, the homopolar motor. A homopolar motor is driven by magnetic fields induced in a circular conducting plate. The plate is mounted between the poles of an electromagnet, causing it to spin at a rate proportional to the input current. Galaxies most likely spin due to the same effect: electromagnetic energy flowing into them.

Galaxies move within an electric circuit that connects the Universe from beginning to end. Primal electric forces are orders of magnitude greater than gravity. Birkeland currents attract one another in a linear relationship that can be up to thirty-nine orders of magnitude more powerful. That means they are the strongest long-range attractors in the Universe. Electric currents flowing through dusty plasma sustain the magnetic fields detected in stars and galaxies.

Ever larger objects and groups of objects are electromagnetic in nature. Perhaps the same forces can be applied when the ever smaller realm is considered. The electric Sun theory is confirmed because solar tornadoes are an electrical discharge phenomenon