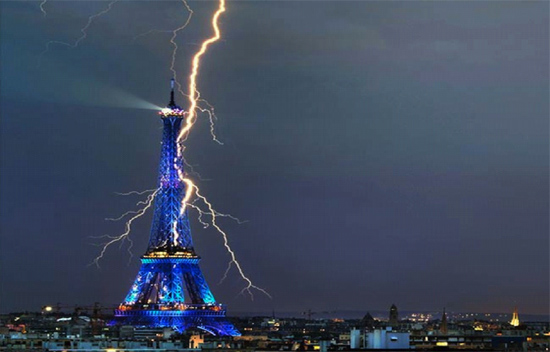 Lightning is not well understood. The most common interpretation involves the circulation of water vapor up and down through clouds in a process called convection. Water is heated by the Sun until it evaporates, rising into the air where it collects into clouds. Water vapor continues to rise higher into the atmosphere, finally cooling enough to condense into liquid. Earth’s gravity then pulls it back to the surface where the cycle repeats.

According to consensus opinions, water droplets tend to collide during convection, knocking electrons off one another, creating a charge separation. Electrons accumulate in the lower portion of the cloud, where it acquires a negative charge. As the droplets that have lost an electron continue to rise, they carry a positive charge into the top of the cloud. Charge separation is the key, causing the cloud to act like an electrical storage device called a capacitor.

A capacitor is used to accumulate and store electric charge. Capacitors are usually made of two conductors separated by an insulating medium, or dielectric insulator. An electric charge on one conductor attracts an opposite charge to the other conductor, resulting in an electric field between them that acts as an electrical energy reserve.

As charges across the capacitor increase, the electric field increases, stressing the insulator’s ability to keep them separate. If a high enough potential grows between the two conductive plates, the dielectric insulator will fail and the capacitor will short circuit, suddenly releasing the stored energy.

It is that phenomenon that most likely contributes to lightning discharges. Stored electrical energy in the clouds and in the ground overcome the atmosphere’s ability to keep the two charges separate, so they reach out to each other as “leader strokes.” When the two lightning leaders meet, a circuit between the clouds and the ground (or between one cloud and another) is completed and a burst of electric current flashes along the conductive pathway.

Lightning’s “arc mode” effect is only one way that the electricity can behave. There are also so-called “glow discharges,” often observed high above the clouds as “red sprites” and “blue jets.” There might also be what are known as “dark” discharges. These could be powerful electric currents but they are unseen and difficult to detect. An “ionic wind” can reveal the presence of a dark discharge, such as that from an electric air purifier.

In thunderstorms, dark mode discharges drag surrounding neutral air molecules along with the charged particles. The strong winds into and out of such storms appear as updrafts and downdrafts. A mark of their power can be seen in any rapidly rotating system, like a tornado. They can lift dirt and rocks, erode surfaces, and accelerate materials to extreme velocity. In an Electric Universe, those storms are therefore not produced solely through hot air convection. Instead, thunderstorms could be a secondary phenomenon driven by an invisible dielectric breakdown of Earth’s atmospheric insulator.

Human beings are not well-equipped to sense electric and magnetic fields. However, the feel of a breeze or the chill of a wind are readily detected. This can lead to an idea that all weather is convective in nature, depending only on the rise of hot air and the fall of its cold analog. In consensus viewpoints, lightning appears to be an aftereffect of that convection, so the electrical interactions between Earth and its surrounding charged plasma sheath are overlooked.

Electrical phenomena are scalable: they demonstrate characteristics that are alike whether the spark spans a millimeter or thousands of kilometers. Tiny electric arc scars are seen with a microscope on insulators and semiconductors. As previous Picture of the Day articles have shown, those arc scars can be seen on the faces of planets and moons, as well.