Home Picture of the Day Thunderbolts, Mammoths and Mass Destruction 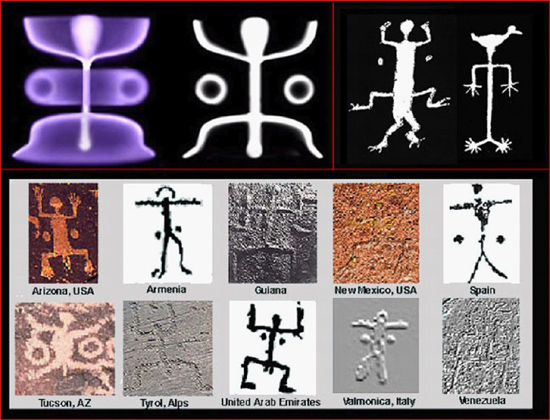 Did cosmic lightning wipeout the mammoths?

Siberia, Alaska, Malta! Three mass slaughter sites! Sites littered with carcasses and skeletons captured in violent death throes. Some are petrified as rocks (Malta), some are preserved in ice (Siberia), some are surrounded and invaded by limestone(Hot Springs – Dakota). Others are entombed in Bitumen (La Brea-L.A.) and peat Bogs (Snowmass- Colorado). Many are impeccably preserved whilst the bulk are shattered, dismembered and rolled (Gibraltar) by forces so violent and unseen today that we are naive to their mysterious powers! These extinct species met with an instantaneous and horrific death.

The modern theory of overhunting, careless burn offs, starvation and plague were never more than a trifle in this overwhelming picture of the mass destruction of species both large and small. Although man was in at the death his hand was rarely involved. And the last extinction occurred not so long ago and it is etched in modern man’s mythology!

But what was the world shattering causative agent? Certainly not one seen in the last two thousand years. On a journey to track down this mystery I visited Rick Firestone at Berkeley National Laboratories. Rick ran the world’s first cyclotron and is the quintessential expert on isotopes and radioactive decay. Intrigued as myself he had relentlessly dug around mammoth and the concurrent “Carolina Bay” crater sites to uncover legitimate keys to the puzzle. in specific layers of earth was evidence that pointed to the cosmological origin of the megafauna’s instantaneous death.

Many of the mammoth tusks were peppered with tiny iron particles driven deep into the ivory. More they were surrounded with nano diamonds, carbon spherules and radioactive (isotopic) beryllium, iridium and other evidence of a devastating and deadly atomic fusillade. Curiously this mass destruction layer was separated from future deposits by what he called a black vegetative matt. Beyond that new species immediately took over. This contradicts Darwin’s theory of slow evolution by “natural selection”!

Rick is adamant that the native American Clovis cultures witnessed this event. He quotes the “Lakota” peoples.

“The creator sung the song of destruction and sent down huge thunderbirds to wage war against the giant animals and evil humans. Finally at the height of the battle the thunderbirds threw down their most powerful thunderbolts all at once. The fiery blast shook the entire world, toppling mountain ranges and setting forests and prairies ablaze. The giant animals and evil people burned up where they stood. He then sent down rain and a great quake that split open the world sending great torrents of water across the world. Today are found the bleached bones of the great animals buried in mud and rock all over the world.”

The Australian Aborigines have similar tales that relate the slaughter of the giant Kadimakara whose remains are found around Lake Eyre.

But what was the cause of this Megalightning? Adrienne Mayor, writing on the mythology of the native American tribes, emphasizes it was not ordinary lightning but Cosmic “Thunderbolts”. These were world shattering discharges. Rick Firestone believes they can be traced to cosmic ray invasion from an exploding supernovae. Others believe that it was an extraordinary coronal mass ejection (CME), or possibly a comet, such as Shoemaker-Levy 9, or perhaps a series of meteorites. Importantly, a large body now consider the possibility of planets in electromagnetic disturbance. They site Jupiter and its moon Io as a example of planetary interplay.

Regardless of the source of destruction, “rock art” (petroglyphs) offer powerful evidence of the operative tool. Anthony Peratt, a plasma research physicist at the Los Alamos National Laboratory, has noted the extraordinary similarity between “squatter man”(see illustration) petroglyphs and his laboratory plasma beam instabilities. He maintains that early man recorded in rock massive plasma discharges in the heavens. These incredibly powerful electromagnetic instabilities eventually discharged causing devastating effects. Magnetic reversals, x-ray bombardment, devastating winds, purging floods, wild fires, mountain building and a host of other cataclysmic scenarios visited Earth. Everywhere in the world you go from Australia’s Kimberley’s to Saudi Arabia and the U.S. you see rock art replications of these plasma instabilities. The tool of mass extinctions?

Research these sites for yourself. In Australia we have similar destructions of the giant wombats and Kangaroos. Near Melbourne there is Romsey and Inverloch, Naracoorte on the Victorian border and Cuddie Springs in Queensland. They are variously entombed in Limestone or thrust together and mashed in spherical boluses.

Importantly this rejects Darwin’s theory of evolution by natural selection and supplants it with instantaneous species change at extinction boundaries. Is this by electromagnetic modification and adaption of the DNA? Bizarre? New evidence is emerging.