Home Picture of the Day The Pioneer Anomaly 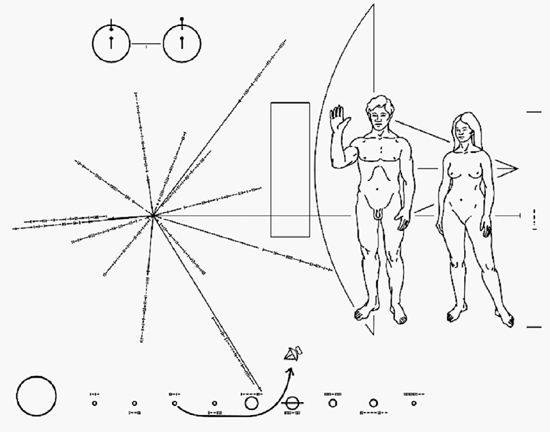 The plaque attached to Pioneer 10 now billions of miles from the Sun. Credit: NASA/JPL

Scientists have found a small but significant deceleration in the Pioneer spacecraft as it makes its way through interstellar space.

For several years, NASA analysts have reported a slow but steady “tug” on the Pioneer 10 and 11 spacecraft as they head outward in opposite directions from the Sun. Based on the gravity-only model of the universe under which observational research is constrained, the research team has no explanation for what has been termed the “Pioneer Anomaly”.

Pioneer 10 was launched from Cape Canaveral on March 2, 1972 on a primary flyby mission to Jupiter. It was the first spacecraft to reach Jupiter and return close up images of the giant planet. Its last signal was received on January 23, 2003 when it was almost 8 billion miles from Earth. Until the faster moving Voyager 1 space probe overtook it, Pioneer 10 was the most remote man-made object in space.

Pioneer 11 was launched April 5, 1973, on a similar mission, except that it was sent in the opposite direction to the Sun’s motion through the galaxy. Unlike Pioneer 10, which moved into a trajectory taking it upward and out of the plane of the ecliptic, Pioneer 11 headed for Saturn and the more remote regions of the solar system, passing within 21,000 kilometers of Saturn’s cloud tops. On November 30, 1995, Pioneer 11 reached the end of its power supply and was silenced forever.

The effect that concerns NASA scientists is the distance calculations for both probes. Each appears to be off course by several hundred thousand kilometers and no one can quite figure out why. Suggestions for the cause of the deceleration range from the comical to the contrived:

Dark matter is acting like a friction medium, creating drag.

Multi-dimensional space is acting on the probes in ways that are not understood.

Gravity is not behaving as theory suggests it should behave.

Dark energy is being observed in its anti-gravitational activity.

“Quantum kinetics” theorizes that sub-atomic forces are acting on the probes in unexpected and undetectable ways.

In a previous Picture of the Day article about WMAP and the cosmic microwave background, the “hole in space” astronomers have detected was shown to be nothing more than an illusion resulting from theories that advocate a big bang cosmology. In the case of the Pioneer anomaly, a similar intellectual blindness is overwhelming the ability for conventional observers to see what is actually happening. As the litany of “possibilities” grows more esoteric, they move ever more distant from the truth of the matter: electric currents in space.

Doppler shift methodology is used in the Pioneer 10 observations. Every so often, microwave signals are beamed at the spacecraft in order to time the return signal. The distance the probe has traveled can be determined through time-speed-distance calculations. The discrepancy amounts to a tiny but measurable amount.

According to our current understanding of gravity, over the last 34 years both Pioneer 10 and 11 should have traveled more that 400,000 kilometers farther than they have actually flown. As NASA investigator Slava Turyshev states:

“This inability to explain the anomalous acceleration of the Pioneer spacecraft with conventional physics has contributed to the growing discussion about its origin.”

However, as long ago as March 20, 2002, electrical theorist, author and speaker Wal Thornhill wrote:

“After launch, a spacecraft accepts electrons from the surrounding space plasma until the craft’s voltage is sufficient to repel further electrons. Near Earth it is known that a spacecraft may attain a negative potential of several tens of thousands of volts relative to its surroundings. So, in interplanetary space, the spacecraft becomes a charged object moving in the Sun’s weak electric field. Being negatively charged, it will experience an infinitesimal “tug” toward the positively charged Sun. Of most significance is the fact that the voltage gradient, that is the electric field, throughout interplanetary space remains constant. In other words, the retarding force on the spacecraft will not diminish with distance from the Sun. This effect distinguishes the electrical model from all others because all known force laws diminish with distance. The effect is real and it will have a fundamental impact on cosmology and spacecraft navigation because…Pioneer 10 has confirmed the electrical model of Stars!”