Home Picture of the Day Subsurface Glaciers on Mars? 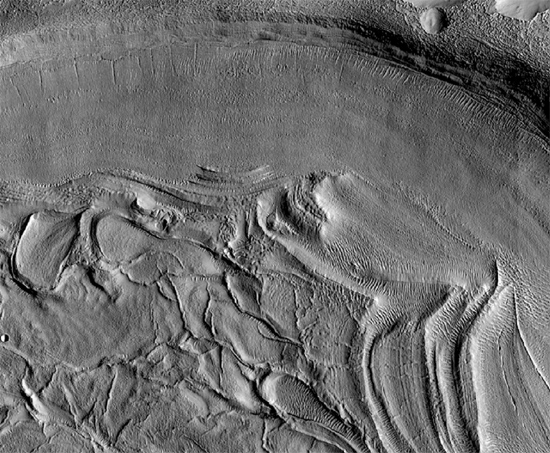 Fluvial effects and aeolian processes are said to have eroded the surface of Mars. Could it have been electric discharges?

Mars represents a new frontier in the history of science. No celestial body, not even the Moon, has been so extensively studied in so many ways. From the days of Giovanni Schiaparelli’s observations to the arrival of remotely controlled robotic platforms wandering its surface, Mars has been a source of mystery as well as enlightenment when it comes to explaining the origin of the Solar System.

One of the greatest mysteries about other planets is whether liquid water exists in their alien environments. Water is sought on other worlds in order to search for life in the Universe. Since water sustains our ecology here on Earth, it is presumed that water is essential for the establishment and the continuance of life on other planets. For that reason, the primary mission of satellite-based imaging systems around Mars, for example, is to look for evidence that water exists in the open or to confirm that it once flowed freely across the surface. Barring that evidence, it is hoped that research experiments will find subterranean water or frozen blocks of ice in areas that are shielded from direct sunlight.

The Mars Global Surveyor (MGS) carrying the Mars Orbiter Camera (MOC) entered orbit in 1997 with the highest-resolution instruments that could be built and flown during that period. One of its first discoveries was huge outcrops of layered rock extending for hundreds of kilometers through the Schiaparelli Basin, as well as down the walls and out onto the floor of Valles Marineris.

Hundreds of MOC images reveal rock layering in many different settings: craters, canyons and giant scarps dominated by faulting and pitting. Uniform layers with similar thickness suggest to NASA scientists that the strata in Schiaparelli Basin is ancient sedimentary rock that might have been built-up in water and subsequently eroded by wind. Dark drifts of sand occur at the base of the cliffs and light-colored “windblown ripples” are prominent on the flat floor of the multi-kilometer-wide sink.

It is believed that Mars is covered with a global layer of permafrost because the annual mean temperature of the soil is approximately 50 below zero centigrade. It is far colder in the northern and southern latitudes – so cold that carbon dioxide gas freezes into a solid and blankets the terrain with dry ice. Therefore, say planetary scientists, any water “must be” bound up with thick icy soils or locked in frigid underground vaults, because the atmosphere is thin enough for water-ice to sublime directly into vapor and vanish. Since ice rather than liquid water is thought to predominate, it “must have been” Martian glaciers rather than Martian floods that excavated some of the anomalous terrain that we see.

Periglacial landforms occur on the margins of glaciers. They often appear as polygonal fractures, stone circles, wide pits, scalloped cliffs and dirt-covered mounds of ice. Such features “naturally” appear when ice between soil grains melts and then refreezes from season-to-season. Expansion and contraction cycles force the material to sort itself according to density and size, according to conventional science.

The Viking mission satellites hinted at some large geological structures that looked like they might be of periglacial origin. The resolution of the Viking cameras was too low for any specific details to be analyzed, however. The MOC instruments provided a better view, although Mars Global Surveyor reached the end of its battery-life on November 6, 2006. Now it is HiRISE that is providing grist for speculations about water on Mars.

On Earth, glaciers are theorized to create characteristic varves, moraines and loess. Each type of deposit seems to require that mountains of ice, acting like slow-motion bulldozers, push enormous mounds of soil and rock ahead of their billion-ton flanks. In so doing, the gravel and sand is supposed to be sorted by the glacial movement and piled-up into distinctive formations.

In the image at the top of the page, the bizarre contraction and folding on the floor of a 12-kilometer shallow crater is said to be from glaciers flowing down the crater wall and compressing the rocks and sand into bands and folded striations. Is that what has taken place? What else besides glaciers could act with compressive force and sort the material into cohesive layers? It might also be added – blacken it and squeeze it into “dunes” with deep channels etched into their slopes?

In previous Picture of the Day articles about Mars, the signature of powerful electric arcs that once impacted the surface have been identified. The incredible energy released by plasma discharges took the form of sinuous rilles, flat-floored craters, “railroad track” patterns in canyons and craters, intersecting gullies with no debris inside them, giant mesas with Lichtenberg “whiskers” and steep-sided ravines wending through landscapes dotted with circular uplifts.

If what we find on Mars took place in the presence of planetary lightning bolts and was not the result of ice or water moving across the surface, should we rethink our ideas about similar observations here on Earth?