Home Picture of the Day Frost and Brimstone 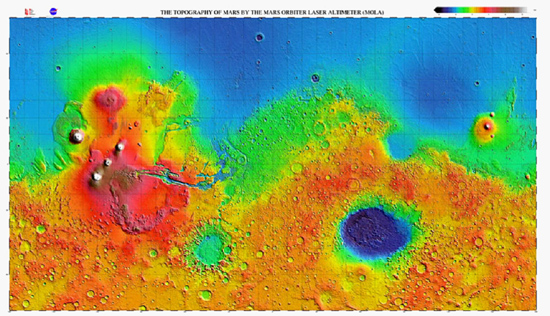 Speculations about the existence of liquid oceans on Mars have been around for centuries. The Mars Science Laboratory, known as Curiosity, is currently seeking evidence for that conjecture. Images from orbiting cameras supposedly confirm that water once flowed on the surface of the now frozen and barren planet. However, recent publications cast doubt on that idea.

At this point, after several years of exploration, no confirmation either way has been forthcoming. Some discoveries, such as the presence of olivine deposits on the surface, seem to preclude the existence of water on Mars since olivine is readily dissolved and dispersed in water. Any large deposits would have been washed away eons ago if there had been large quantities of liquid.

Scientists from the University of California at Berkeley wrote one of the more interesting “confirmations” for the liquid ocean hypothesis. Although the oceans have been gone for over 2 billion years, two “shorelines” extending for thousands of kilometers have been overlooked in past analyses of satellite imagery.

Crustal folds have supposedly obscured the shape of a fossil coastline as the planet deformed during a change in its rotational direction in the past. Due to some kind of imbalance in the mass distribution inside Mars the planet tilted over by at least 50 degrees on its axis, causing crustal distortions. Due to the change in orientation, increased exposure to the solar wind caused much of the water that once occupied the ocean basins to be lost.

It is proposed by planetary scientists that one-fifth of the Martian surface was once covered with water, so there “must be” more water remaining, locked-up in the rocks or buried underground in giant blocks of ice.

Another factor that contributed to the Martian oceans is carbon dioxide with large percentages of sulfur dioxide and hydrogen sulfide. Today, the average temperature on Mars is -45 C, with a mean surface atmospheric pressure equivalent to standing on top of a mountain six times taller than Mount Everest. The atmosphere is frozen, dry and thin to the point where water would immediately sublime and dissociate, so somehow that atmosphere must have been thicker and warmer in the past.

The present carbon dioxide atmosphere is said to indicate an older version of the planet with greater atmospheric density containing more gas, according to conventional understanding: a “greenhouse effect”. The problem is that no amount of carbon dioxide in the evolution of any planet is sufficient to warm up the atmosphere by itself.

Other researchers speculate that volcanoes on Mars once erupted with tremendous quantities of sulfurous gases, acidifying the then extant oceans and preventing the formation of carbonates. Mars has a lot more sulfur than Earth, so the sulfuric acid is supposed to have dissolved away the limestone beds, for instance, while at the same time acting as a booster to the greenhouse environment.

Earth and Mars are presumed to have been similar in the past so many explanations have been offered for why the two planets diverged into their disparate natural settings. It is not surprising that electricity in the form of plasma discharges and lighting bolts has never been considered in the development of each world.

“The idea of former oceans and rivers existing on Mars came from the many scoured channels and the flat, low terrain in the northern hemisphere. This marked hemispheric dichotomy is inexplicable by any known geological or astronomical effect. It has never occurred to geologists that the agent involved was electrified plasma. Why should it? Astrophysicists tell them that we live in an electrically neutral universe in which cosmic charge separation is impossible. But if that single assumption is incorrect everything changes. If the visible universe suffers cosmic charge separation then we have a source of energy to build and shape galaxies, light stars, give birth to planets, organize stable orbits and leave the resulting scars of electrical transactions on all solid bodies.”