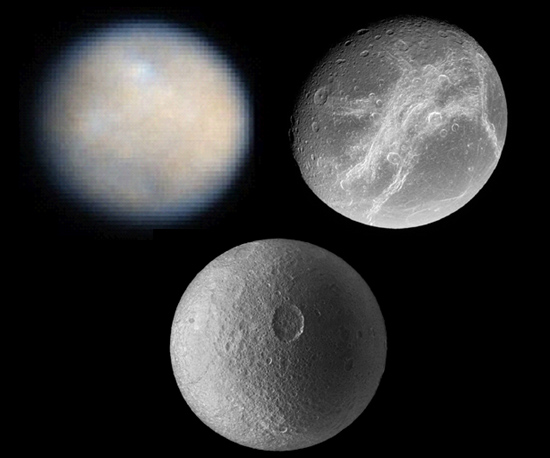 The Dawn spacecraft will arrive at Ceres in August of 2015

Ceres is the largest asteroid in the Solar System. The most recent measurement from the Hubble Space Telescope puts it at approximately 975 kilometers in mean diameter. It is so large that it is roughly spherical, and has recently been classified as a dwarf planet, along with Pluto and several recently discovered Trans-Neptunian Objects like Sedna.

Ceres was discovered by Giuseppe Piazzi in 1801. Piazzi and other astronomers of his day were looking for a planet in the gap between Mars and Jupiter. He and his contemporaries were influenced by a theory presented in 1766 by Johann Titius, later popularized (without credit to Titius) in 1778 by Johann Bode. There appeared to be a mathematical relationship among the orbits of the major planets.

Bode’s interest in the relationship became more intense when Uranus was discovered in 1781. The Titius-Bode sequence included 19.6 as its penultimate indicator, and Uranus was found to be 19.19 AU from the Sun. Bode insisted that the gap between Mars and Jupiter be explored based on that finding, so a consortium of astronomers (the “celestial police”) began to look closely for a new planet. Piazzi finally found Ceres in the gap, and it was subsequently hailed as the missing planet. However, more asteroids were soon discovered, so the significance of the find was diminished, especially since the diameter of Ceres was so small.

Ultimately, the numerical correlation was abandoned when Neptune did not obey the last indicator of 38.8: it is in a variable orbit between 29.81 and 30.33 AU from the Sun.

NASA launched the Dawn spacecraft on September 27, 2007. Its scientific observations of the asteroid Vesta began on July 17, 2011. Dawn will leave Vesta in July of this year, spending almost three years riding the thrust of its ion engine until it reaches Ceres. Mission specialists hope that analyzing these two distant denizens of the Solar System will provide them with greater insight into planetary formation and evolution.

Planetary scientists give no heed to an electrical cosmogony because they know almost nothing about plasma and electric charge movement in space. They continue to rely on the theory of nebular collapse. In the consensus view, asteroids and other rocky bodies are created from the “leftovers” that were not incorporated into major planets.

Apparently, Vesta shares characteristics with other objects in the Solar System. Images of its surface reveal craters that are hundreds of kilometers in diameter. There are long canyons and trenches that are ten kilometers wide. Those trenches are chains of craters. If Vesta were placed alongside Phobos, the electrically scarred moon of Mars, one would be hard-pressed to distinguish between them.

We predict that when Dawn attains orbit around Ceres and begins its close range observations, there will be similar structures. Large clean craters, rilles, a lack of explosive debris, flat-floored canyons, and sharp ridges. Ceres will most likely look like its cousins, Tethys and Dione.