Home Picture of the Day The Very Stones Cry Out

The Very Stones Cry Out 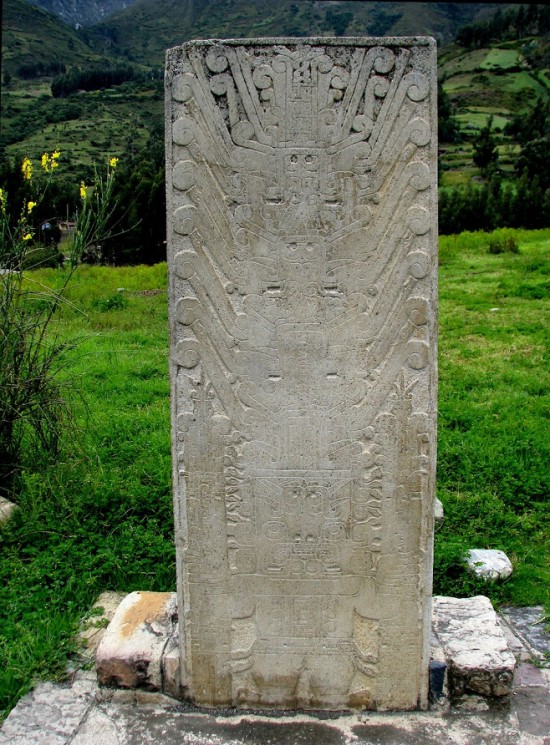 Even the lonely monuments left behind have a story to tell.

Chavín de Huantar, in the Peruvian Andes, is one of many civilisations to have preceded the mighty Inca empire. The occupants of the ruins have no name; lacking a script, their cultural identity is forever buried in the sands of time.

Hard by the entrance to the site, the visitor is greeted by the so-called Raymondi Stela, named after the Italian geographer and natural historian Antonio Raimondi (1826-1890), who discovered it in a peasant’s hut in Callejón de Conchucos in 1874. Those unable or unwilling to journey this far can inspect a faithful replica in Lima’s Museo Nacional de Arqueologia.

Devoid of any helpful caption, such as ancient Egyptian and Mesopotamian artists would frequently provide, the image carved into the granite surface startles the observer. What on earth is here depicted? The anthropomorphic being at the base will undoubtedly have represented a conspicuous deity or ancestor in the pantheon of the Chavín people – if not the principal object of worship at the adjacent temple. The two staffs held by this being, one in each hand, identify it as the dios de los varas or ‘god of the rods’ familiar from various other cultures throughout Peru. And the serpentine locks of ‘hair’ attached to the head are a common feature of the same entity.

Unparalleled, by contrast, is the god’s towering headdress, composed of three stacked heads, nine superimposed ‘tentacles’ on each side, and a minor structure on top crowned by a pair of intertwined serpents. It’s a baffling scene, defeating scholars’ best attempts to propose a suitable prototype in the familiar world of nature. Nor do comparisons with Medusa’s ophidian hair, Hermes’ caduceus or the two snakes held in the outstretched hands of Herakles or a Cretan goddess shed much further light; all are legitimate, but are as mysterious themselves as the image at hand.

A solution comes from an entirely unexpected source – the study of laboratory plasmas. Research less than a few decades old has uncovered what may well be the only plausible prototype for the Chavín deity in all of nature: a plasma z-pinch subject to sausage, vortical and other, nonlinear instabilities. A plasma beam pinched tightly will eventually break up into a stack of toroids, typically 9 in number. An increase in electrical current with a slow rise time pushes the evolution of the column into a chaotic regime, which sees the toroids joined by a central bar before flattening, extending outward like the branches of a tree, and curling up at the ends.

The American plasma physicist Anthony Peratt proposed that such a high-energy density formation materialised in visible light in the earth’s upper atmosphere prior to the dawn of civilisation. The cause of this ‘enhanced aurora’ was a dramatically increased influx of charged particles into the earth’s magnetosphere – most likely from the sun. A speculative hypothesis it is, but one rooted in a base of solid experimental work and sound reasoning, sprouting tendrils into many a scholarly discipline.

Did the deity of Chavín de Huantar owe its perplexing countenance to a giant atmospheric plasma tube, carved in granite? In the absence of any explicit indigenous commentary, such as a written note or a surviving oral tradition among local Quechua descendants, this will remain thought-provoking, but unverifiable guesswork – the stele cannot stand on its own.

Yet if the reality of such a prehistoric near-earth plasma column is established on account of other, more definitive sources, the iconography of the pre-Incan ‘rods god’ does furnish circumstantial evidence. At least in this sense, even mute artefacts transform into a welcome repository of information. The layered heads and arms come to life on a theory of layered evidence.