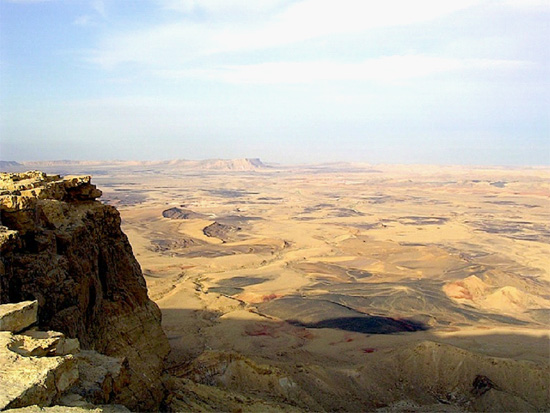 Makhtesh Ramon. One of five makhteshim in the Negev. Credit: Mark A. Wilson

Is this elongated crater in the Negev desert the result of water erosion?

Ramon Crater in Israel is the largest erosion crater known, measuring 40 kilometers long by 10 kilometers at its widest point. The Hebrew word “makhtesh” actually means “cirque”, a bowl-shaped depression at the upper end of a mountain valley, so “crater” is not accurate. The makhteshim are thought to be unique to Israel and the Sinai Peninsula, although other formations around the world bear strong similarities.

All five of the Negev’s makhteshim are thought to be around 220 million years old, corresponding to a hypothetical time when oceans covered that part of the world, forming as sedimentary deposits. Earth movements pushed the materials upward into a dome-shape that has been subsequently worn down through erosion by wind and water. Over the millennia, the surrounding peaks have diminished and the hills and valleys have vanished into the dust and sand of the great desert.

As has been pointed out in the past, however, erosion does not possess the all-encompassing power for change that modern geology asserts.

Erosion is a blurring and rounding process. Conical mountain peaks are said to slowly reduce into flattened mounds and finally wear down to the level of the plains out of which they rose. Steep, vertical walls are supposed to gradually become shallow slopes, and v-shaped river valleys must give way to meandering flood plains. If the mesas, gullies, pillars, spikes, and ridges have all been exposed to wind and rain for millions of years, why are they still so sharp, steep and well-defined?

Ramon, as well as other makhteshim, such as Katan, are similar to geological formations in the Southwestern United States, particularly in the San Rafael Swell region. They also resemble an area in the Flinders Ranges, Australia known as Wilpena Pound.

The San Rafael Swell and the makhteshim of the Negev possess the characteristic dual-ridge valleys and arc-shaped headlands, with radiating Lichtenberg figures, that have been identified in previous Pictures of the Day as signs of electric arc excavation. They are composed of giant, chevron-shaped blocks that suggest they were carved rather than molded by volcanism or eroded by wind and rain.

Notched vertical cliffs, wide, flat valley floors, scalloped walls, and embossed Lichtenberg figures lend credence to a theory of electric discharge events in the recent past, rather than the gradualism preferred by consensus geologists. Hundreds of millions of years are unnecessary when electricity is added to the equation.