Home Picture of the Day Slower than the Speed of Light

Slower than the Speed of Light 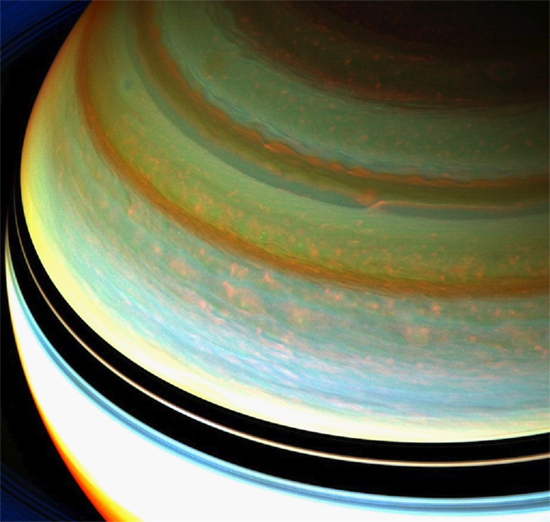 Over its considerable lifetime NASA’s Cassini spacecraft has collected a vast number of observations concerning the planet Saturn. Saturn, like the other gas giants in the Solar System, has energetic jet streams flowing east and west around the planet. These high-powered “winds” must get enormous amounts of energy from somewhere.

“We know the atmospheres of planets such as Saturn and Jupiter can get their energy from only two places: the sun or the internal heating.  The challenge has been coming up with ways to use the data so that we can tell the difference,” said Tony Del Genio of NASA’s Goddard Institute for Space Studies, N.Y., the lead author of the paper and a member of the Cassini imaging team.

It has been said many time that our biggest intellectual or conceptual problem is knowing things that are not so. While Electric Universe advocates understand the bilateral option of the Sun or internal heating is not right, at least the focus is turning away from the Sun being the source of the energy. Instead of heat energy flowing from within, the Electric Universe paradigm has Saturn feeding off the Birkeland current that drives the Solar System. All the objects in our planetary system give off more energy than they receive from the Sun, and Saturn is too far away from the Sun to receive anything but negligible heat from it.

Without an electrical mechanism to drive these winds in different bands and at different levels of Saturn’s atmosphere, mainstream thinking is turning towards the concept of internal heat evaporating water from the interior into vapor and carrying the energy upwards. Condensation at higher atmosphere altitude would then release this energy, but it is unclear how this mechanism would structure the atmosphere into distinctive levels and cause some jet streams to flow westward while most flow eastward.

“The condensation of water was not actually observed; most of that process occurs at lower altitudes not visible to Cassini.”

In the Electric Universe model, electrical energy is driving the winds externally, all the while forming auroras at the poles, along with the mysterious hexagonal structure found at the south pole. The internal heating model is simplistic and inadequate to account for all the impressive atmospheric phenomena on Saturn.