Home Picture of the Day Ganymede 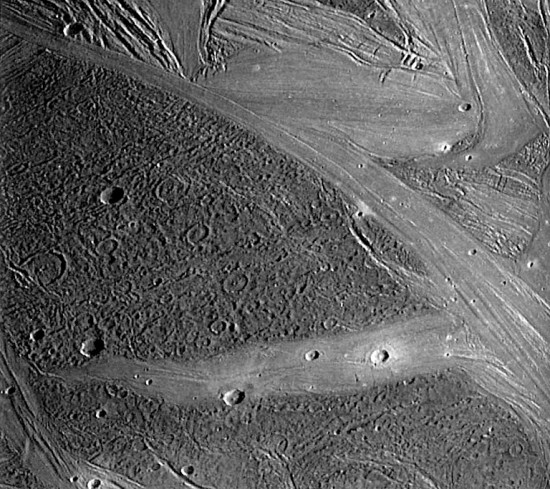 The surface of Ganymede. Credit: NASA/JPL

The only moon in the Solar System with an all-encompassing magnetic field continues to be a source of speculation.

Over the last three decades, beginning with Pioneer 10 in 1973 and including the most recent visit by New Horizons, seven different remote observation platforms have flown past Jupiter and many of its moons. Of all Jupiter’s moons, Ganymede is possibly the most exotic, with a wild mix of topography, fractures, craters and sinuous rilles.

Ganymede is unique among moons in that it has a magnetic field surrounding it, something even Mars does not possess. In December 1995, the Galileo spacecraft entered orbit around Jupiter. During a flyby of Ganymede at an altitude of only 838 kilometers, Galileo discovered a dipole magnetic field similar to that which surrounds Earth, only much weaker. As with Io, the signature of Ganymede’s flux tube, the electric current that connects it with Jupiter, can be seen in Jupiter’s polar aurora.

Plasma streaming into Ganymede’s thin atmosphere creates the auroral emissions, as well as electromagnetically sputters its frigid surface, generating both its atmosphere and ionosphere. Observations of Ganymede’s terrain indicates that the sputtering effect was far more intense at some time in the past.

Ganymede is the largest moon orbiting any planet, with a mean diameter of 5262 kilometers, and is the fourth largest rocky object in the Solar System. Its magnetic field is thought to be created by the moon’s molten core in a “dynamo”, similar to how Earth’s core is hypothetically generating its magnetic field.

However, Ganymede’s core is supposed to be so hot that it would be impossible to hold on to permanent magnetism, since its temperature should be above the Curie point. Also, Ganymede is so small that, according to conventional astrogeology, it should have cooled off billions of years ago and ought not have a liquid core in the first place. NASA’s ad hoc explanation creates its own conundrum.

Ganymede may once have been closer to Jupiter, so it was alternately compressed and stretched by the tidal forces of the planet’s gravitational field. The constant kneading of the moon kept its core liquid for much longer than if it had formed in its present orbit. If that were the case, then what forced an object bigger than the planet Mercury to move into a new orbit? No thought was given to a mechanism for moving several quintillion tons of rock and ice a few thousand kilometers against the force of Jupiter’s gravity.

The most obvious aspect of Ganymede’s bizarre nature is its surface and the manifold examples of apparent electric discharge machining (EDM). Previous Picture of the Day articles presented evidence for the hypothesis by showing how crater chains form on Ganymede and other planets and moons.

Another likely EDM example is the gigantic circular structure dominating an entire hemisphere. Callisto’s Valhalla basin also dominates its southern hemisphere. Within the darkened circle on Ganymede, several bright craters are arrayed in a spiral shape that gradually decreases in diameter toward the center. Some craters have rays extending outward for several kilometers in all directions.

Other craters are nested concentrically within the other in a “bull’s eye” pattern. Such features require a chain of unlikely coincidences if mechanical impacts are to explain them, but EDM creates such scars naturally.

Could the magnetic field on Ganymede be related to the electrical phenomena that have scarred it? If Ganymede was indeed closer to Jupiter at some point in its past and was then wrenched from orbit and thrown thousands of kilometers farther out from its parent, could that force have been electrical in nature? Was the moon gripped by an electrodynamic field large enough to imprint its core with permanent magnetism? What effect does the electrical connection with Jupiter have on Ganymede today?

NASA’s Juno mission is currently en route to Jupiter. As more data is returned from a growing number of deep space probes, we predict increased evidence for electric effects, and more support for the Electric Universe theory.