It Has a Nice Ring To It 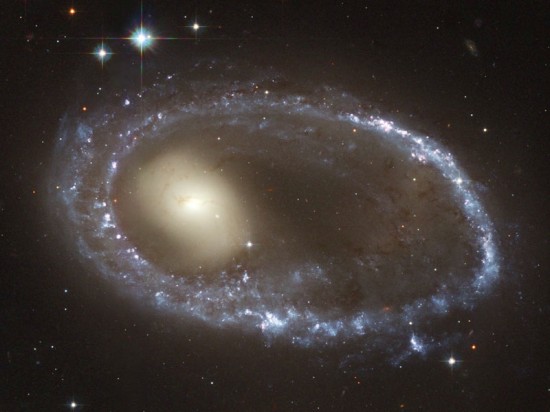 There are rings around planets, rings around stars, and there are rings around galactic nuclei, as demonstrated by the Hubble Space Telescope image of AM 0644-741. Although the conventional explanation for such structures is that they are formed when one or more collisions between galaxies take place, electricity flowing through plasma is a more likely cause.

It is possible that stellar haloes are examples of a dense plasma focus penumbra, with AM 0644-741 being a dramatic example. Images taken of plasma gun experiments provide a direct analogue to its galaxy-scale discharge.

A dense plasma focus device is usually constructed from two electrodes made of copper or beryllium cylinders, one inside the other. They are confined within a vacuum chamber, with low pressure gas between the cylinders. An electric pulse is sent across the electrodes, causing electric charge to flow from the outer electrode to the inner electrode for a few milliseconds. The electric arc heats the gas between the cylinders, creating a plasma and an intense magnetic field. The magnetic field “pinches” the plasma into tiny filaments called a charge sheath.

The filament sheath flashes to the end of the inner electrode, where the plasma compresses into a magnetically confined “plasmoid.” The magnetic field decays, inducing an electric field that accelerates an electron beam in one direction and a beam of positive ions in the other. The electron beam heats the plasmoid to energies of 100,000 electron volts, the equivalent to billions of Kelvin in temperature.

AM 0644-741 is most likely equivalent to the rings that surround SN1987a, except on a galactic scale. As the electric current pinches down, variations in plasma density cause individual filaments in the gun’s current sheath to glow. Double layers accelerate the charge carriers that then emit extreme ultraviolet light and X-rays.

A double layer consists of an electric charge separation that forms in current-carrying plasma. Two oppositely charged parallel layers generate an electric field across the layer, accelerating charged particles in opposite directions, which produces an electric current. If the voltage drops and the separation between layers is great enough, electrons can reach velocities approaching the speed of light. Double layers in plasma can self-generate between two regions of different properties.

The dense plasma focus device provides a precise mechanism by which cosmic electric currents can influence the evolution and morphology of space structures (See Peratt, A. L. and Dessler, A. J. “Filamentation of Volcanic Plumes on the Jovian Satellite Io.” Astrophysics and Space Science volume 144, numbers 1-2, May 1988, pages 451-461).

Just as the helical strands from the core of galaxy NGC 3079 are an indication that electricity is discharging from its nucleus, the swirling toroids that constrain the hot stars in the halo of AM 0644-741 conform to the Electric Universe theory.

A signature phenomenon in a dense plasma focus is helical strands of energy surrounding a powerful arc-mode discharge and a dark-current torus. The strands are plasma confined by magnetic fields into something like “power lines” in space, otherwise known as Birkeland currents. That phenomenon is present in the plasma gun discharge that makes up AM 0644-741.