Home Picture of the Day Stars That Will Not Explode

Stars That Will Not Explode 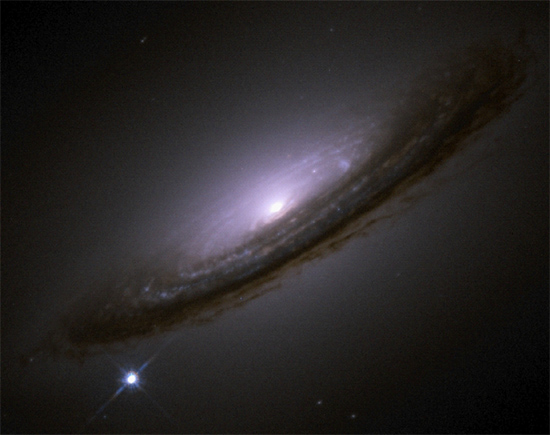 Clouds of gas and dust a thousand times less dense than a puff of smoke are said to be drawn into a region of increased density that coaxes even more material to collect there. Eventually, molecules within the cloud fall into a gravity well of nuclear fusion, initiating a self-sustaining reaction.

According to consensus opinions, stars that are extremely massive live fast and die young. They “fuse” their hydrogen and helium into heavier elements that, in turn, fuse into elements that are heavier still. In their senescence, the radiative emissions from such stars are thought to be so intense that gravity can no longer confine their energies and they “blow away” enormous quantities of stellar material in a supernova explosion. In some cases, they lose mass up to a million times faster than our own Sun. However, that process is highly speculative.

According to a recent press release, “Many of the best computer models of supernovas fail to produce an explosion.” Instead of the stellar simulation collapsing and rebounding like a supernova ought to do, gravitational forces are so great that a rebound does not occur after collapse.

On June 13, 2012 NASA launched the Nuclear Spectroscopic Telescope Array (NuSTAR) in an attempt to analyze high-energy X-rays in what are thought to be the remnants of exploded stars. NuStar joins other X-ray space telescopes like Chandra and XMM-Newton, except that it is capable of focusing X-rays to a sharp point, enabling it to “see” energies up to 79,000 electron-volts. That capability makes it more than 100 times more powerful than the others.

Astronomers predict that the titanium-44 isotope will help them improve their computer models. Since titanium-44 is thought to be created by nuclear fusion in stars not quite heavy enough to form hypothetical black holes, in their understanding, it should be visible in the debris left behind by objects such as SN1994D, shown at the top of the page.

Many previous Picture of the Day articles point out that stars are not simplistic balls of gravitationally compressed hot gas, they are composed of plasma. Plasma is ionized, meaning that one or more electrons have been stripped from the atoms in its substance, so it is electrically charged. Plasma does not behave like a pressurized gas, it behaves according to the tenets of plasma physics.

Electric Universe theory agrees with conventional astrophysics in that a supernova can be referred to as an “exploding star.” However, in an electrically charged plasma star, that explosion is due to the breakdown of double layers. The power that fuels the stars comes from external currents of electric charge flowing through vast circuits in space. Rather than “core rebound” or “white dwarf accretion,” supernovae are the result of a stellar “circuit breaker”, where the stored electromagnetic energy in the circuit is suddenly focused at one point.

When a star’s double layer explodes, the electromagnetic energy stored in a vast galactic circuit flows into the explosion. The resulting supernova radiation is emitted across the entire electromagnetic spectrum from radio to gamma rays.

Electric Universe advocate Wal Thornhill wrote: “How does a star explode? The conventional ‘implosion followed by explosion’ model has many shortcomings. An electric star, on the other hand, has internal charge separation which can power a star-wide, expulsive lightning-flash. The star relieves electrical stress by fissioning or blowing off charged matter. A star also has electromagnetic energy stored in an equatorial current ring. Matter is ejected equatorially by discharges between the current ring and the star. Our own Sun does it regularly on a small scale. However, if the stored energy reaches some critical value it may be released in the form of a bipolar discharge, or ejection of matter, along the rotational axis.”