Home Picture of the Day The Sun and its Spoilspot

The Sun and its Spoilspot 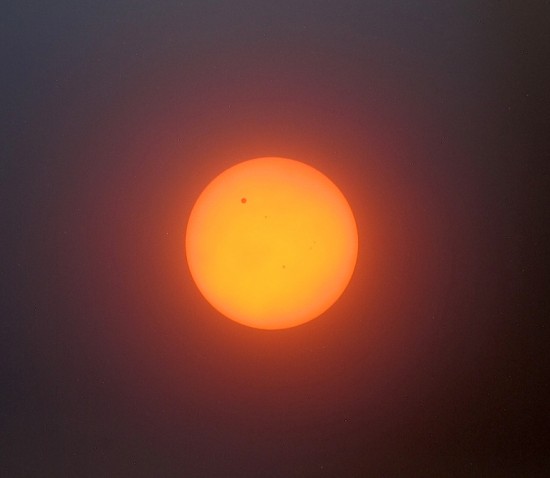 On 5 and 6 June 2012, Venus will appear to move across the face of the sun – a rare event, which will not be repeated until 2117. The occasion provides an excellent opportunity to reflect on the role of transits of Venus and Mercury in archaeoastronomy.

Planetary transits and sunspots can both be observed with the naked eye through a sufficient cover of haze or smoke or by reflection in oil. Aristotle and those who stood in his centuries-long shadow preferred transits to sunspots, due to their dogmatic belief that the sun is a perfect body that cannot be blemished in a physical way. As a result of this blind spot, any dark body appearing against the sun had to be explained either as an optical illusion or as a physical object moving in front of the sun. For 17 March 807 CE, a Frankish chronicle—the Annales Regni Francorum—recorded a transit of Mercury, appearing as a small black dot on the sun. Though our knowledge of historical observations of transits is spotty, this one cannot have been genuine, as the chronicler claimed to have seen it for 8 days. With hindsight, to have passed over the possibility of a sunspot was quite a mistake.

Transits may have played a part in the ancient Greek process of working out the correct astronomical order of the planets. After all, if a planet could be seen to move in front of the sun, its orbit could never lie outside that of the earth—or, on a geocentric model, outside that of the sun. Yet even if such observations had assisted earlier astronomers, they were clearly not passed on—if Ptolemy’s unawareness of past transits is anything to go by:

‘But concerning the spheres of Venus and Mercury, we see that they are placed below the sun’s by the more ancient astronomers, but by some of their successors these too are placed above [the sun’s], for the reason that the sun has never been obscured by them [Venus and Mercury] either. To us, however, such a criterion seems to have an element of uncertainty …’ (emphasis added)

Moving to the cruder level of ‘proto-astronomical’ folklore, a surprising number of cultures referred to Venus as the ‘day star’. Passing over countless other examples, a spokeswoman for the Crow people (Montana) stated:

‘In the evening just as the sun goes down, there is a star that comes out that is called Baappaaihké [Day Star], this is the Evening Star. It is the one that is referred to as the star that appears during the day’.

Any urge to pass this off as inaccurate must be resisted, as with some patience Venus can often indeed be discerned by the unaided eye during the day. Could occasional spotting of a planetary transit have reinforced the tradition?

Descending further into the realm of mythology, the adventurous scholar comes across various other promising possibilities. Ancient Egyptian documents frequently refer to the mysterious ‘eye of Horus’ or the ‘eye of Rē‘’, titles that almost certainly describe Venus and perhaps also Mercury. Whereas these inner planets never stray far from the sun, their dance around the luminary seems hardly eye-like. And even though the ‘eye of Horus’ or of Rē‘ does go missing in the myth, observations of these planets on the surface of the sun, as during transits, would clarify the puzzling terminology on the spot.

From a folkloristic point of view, a planetary transit is akin to a solar eclipse – both events involve visible but transient ‘blackening’ of the sun. Solar eclipses were universally attributed to a malefic ‘monster’ or ‘dragon’ assaulting the sun. This is somewhat odd, as nothing in the course of an ordinary eclipse suggests the presence of such an entity; neither the sun’s gibbous or crescentic phases nor the annulus or Baily’s beads come across as dragons. The varying shapes of the corona may, in passing, have a role to play, but so may transits of a ‘morning star’, as we shall see.

Cross-cultural traditions present the ‘morning star’, former or current, as a memorable prodigy, associated with an episode of darkness. A prominent theme in the classical tradition was the tragic myth of Phaethon, a ‘mock sun’ who set much of the world ablaze and, as Ovid had it, caused a momentary dimming of the sun: ‘The wretched father, sick with grief, hid his face; and, if we are to believe report, one whole day went without the sun’. While some sources used the name ‘Phaethon’ as an epithet of the sun, others interpreted it as the planet Venus.

Other cultures commemorated the arresting sight of the morning star as an awe-inspiring tailed creature, be it a dragon or a bird. The Aztec linked the morning star’s dreadful aspect with its first appearance, towards the end of the creation myth. Thus, Quetzalcoatl’s heart rose into the sky as a gorgeous quetzal-bird, the morning star, following eight days of darkness: ‘And as soon as his ashes had been consumed, they saw the heart of a quetzal rising upward. And so they knew he had gone to the sky, had entered the sky. The old people said he was changed into the star that appears at dawn. Therefore they say it came forth when Quetzalcoatl died, and they called him Lord of the Dawn. … it was after eight days that the morning star came out, which they said was Quetzalcoatl’. For the Aztec, this event marked the first appearance of the light of day in the present cosmic order.

Can such curious traditions about the morning star as a spectacular beast, putting the sun on the spot and sporting a tail, shed any light on the superstitious belief that a solar eclipse is due to a dragon? If a ‘morning star’ formerly appeared larger and more magnificent than it does today, its ability to have eclipsed the sun may well be spot on. Perhaps a comet circling around the sun within the orbit of the earth was responsible. Alternatively, the culprit may have been one of the planets, as some planets – notably Venus – are now known to carry a magnetotail that may well have been visible in the past.

Did Venus pass through a transitory stage in the guise of a spectacular heaven-spanning dragon? If it did, its repeated passages across the sun would certainly eclipse any transits seen in the past few thousand years, including that of today. Sic transit gloria.