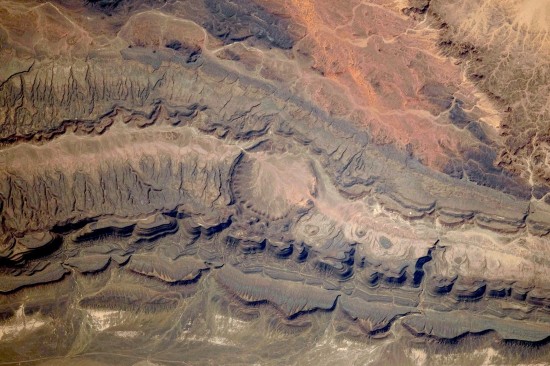 Is this Algerian crater the result of an asteroid impact?

Previous Picture of the Day articles have taken up the question of cratering on planets and moons. In the larger sense, that of the Solar System as a whole, it has been argued that craters are not usually caused by hypervelocity space rock impacts. Instead, crater morphology appears to indicate an electrical origin.

In the image above, there are several anomalous formations that do not correspond to explosive excavation. The crater is “kinked” on the bottom right, and there appear to be two walls within it. There is a well-defined terrace in the lefthand exterior wall. The interior wall is regularly cut. Of special interest are the pale filamentary channels terminating in the crevices carved into the interior wall. Those channels meet up with a larger feature that has penetrated the exterior wall of the crater near the top left and bottom right.

Below the crater, to the right, is a wide notch that curves to the right at the bottom and then travels up the cliff face, carving deeply into the sandstone until it merges with a shallow gully. The gully climbs higher up the cliff into another notched canyon, whereupon it abruptly stops. The structure cannot be the result of water running down the cliff because there is no dry riverbed at the top. Instead, the ravines in the escarpment, in general, look as if they begin at the bottom and etch their way upward.

Geologists say that the two breaks in the crater wall on the left and right are where a now dry river has cut through it. However, the so-called riverbed follows the contours of the cliff above the crater, matching them almost perfectly. Looking closely, multiple offshoots from the main channel descend toward the terraces, bifurcating again and again, cutting deeper as they go. Water does not behave that way. Water cuts deeper where the flow is greatest, not where it begins to diminish.

Lichtenberg figures are exactly opposite to that example: they begin as small threads that merge into larger and larger trackways. This happens because the electric discharges with which they are associated are pulling charged particles toward a point where the arc meets a downward leader stroke.

The charged particles, usually protons, are yanked out of the rock with tremendous force, dragging neutral molecules along with them. That electromagnetic force disintegrates the rock, changing it into ultra fine dust, which follows the electric field toward the spot where the upward return stroke meets the leader coming down from above. The secondary electric arc leaps upward, completing the circuit with whatever initiated the primary. The fine dust follows the discharge vortex, so there is little (if any) debris left behind.

Ouarkziz crater is flat-floored, with near-vertical walls. Its 3.5 kilometer structure does not conform to laboratory experiments that use projectiles to model astroblemes. Instead, it looks like many examples of electric discharge effects on Mars.

Many Pictures of the Day illustrate the problems with assigning impact scenarios to Martian areography. As has been mentioned many times in the past, it is time to start analyzing Earth geology in light of what is found on other planets and moons, not the other way around.